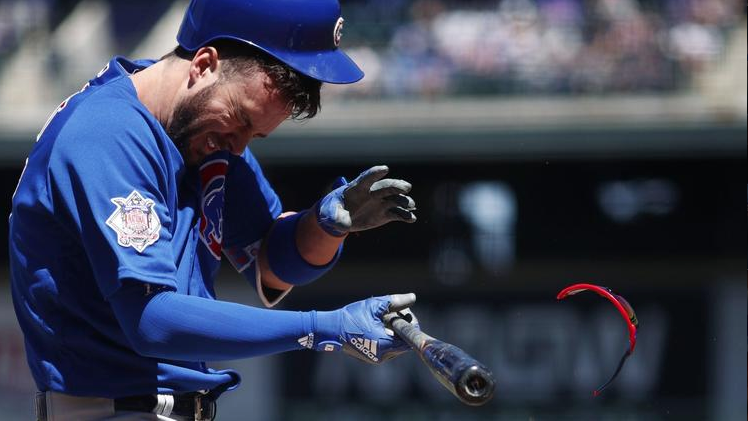 Cubs MVP Takes A Fastball To the Head

A wild game, which ended with an overturned tag play at home plate, began with Chicago Cubs third baseman Kris Bryant getting hit in the helmet by a 96 mph fastball from Colorado Rockies starter German Marquez in the first inning Sunday. The team said Bryant passed all concussion-related tests but is still under evaluation.

“As good as could be expected,” Cubs manager Joe Maddon said after the 9-7 win. “I have not heard of anything awful, but they’re still watching him. I have not heard the word ‘concussion’ yet.”

Bryant, 26, was helped off the field with assistance, suffering a laceration above his left eye due to his sunglasses being knocked off. Bryant wasn’t available for comment after the game but will fly with the team to Cleveland before an off day Monday.

It was just the first of many wild moments on the day, which included both Cubs hitting coaches being ejected immediately after Bryant was hit.

“I’m sorry I got a little emotional,” hitting coach Chili Davis said. “I said what I said and I was done, and all of a sudden I have an umpire screaming at me, telling me ‘shut up or else.’ Or else what? I’m emotional. One of my hitters just got hit in the head.”

Not just any hitter. Bryant, a former MVP and NL Rookie of the Year, was off to a great start to the season.

“It scared the s— out of me to tell you the truth,” Davis continued. “That guy is a huge part of our team. So I get tossed, the guys get fired up and score six runs. You know what I mean?”

After Davis’ ejection, Cubs assistant hitting coach Andy Haines threw his drink toward the umpire on the field and was also ejected.

Maddon was upset the umpires simply didn’t ignore the dugout, which was just letting off steam, at least in his estimation.

“My argument was ‘stay out of my dugout,'” Maddon explained. “It’s an emotional moment. There was a lot of stuff going on. Don’t look for stuff. Nothing would have happened. We would have been fine. I had no chance to go in and settle the dugout because I’m out there [with Bryant].”

Intense moments continued throughout the afternoon, including a third-inning back-and-forth between Cubs shortstop Javier Baez and Rockies baserunner DJ LeMahieu, who was on second base at the time. Baez thought LeMahieu was blatantly stealing signs from Cubs catcher Victor Caratini.

“Don’t do it to our face,” Baez said. “We’re going to do something about it. I don’t care who it is. [Saturday], they hit a lot of pitches with men on second. Today, I saw him, every pitch. He was doing it.”

Baez tried to stand in front of LeMahieu to block his line of vision as Caratini was giving the signs. While doing so, Nolan Arenado struck out.

“I turned to the outfield and said, ‘You see the difference when they don’t steal the signs?'” Baez recalled. “Then [LeMahieu] said something. He told me to change the signs. So he’s telling me to my face he’s [stealing] the signs. I’m really mad about it. I’m really smart. We won the game and the series.”

Maddon is never one to discourage outside-the-box thinking, approving of Baez’s strategy and execution.

“That was old-school there,” Maddon said. “They’re trying to give location and Javy is blocking. I’ve never seen that before. That is some grassroots stuff. You may see that more often … He was not scared or afraid to do it. I loved it. I said, ‘It’s straight up winter ball, boys.'”

Albert Almora Jr. was visited by the Cubs training staff after making three highlight-reel catches in center field, two of which saw him go to the ground hard. He hit the wall on the other.

“On this kind of field, you have a lot of room to run,” a sore Almora said afterward. “I was just trying to be in the right spot at the right time.”

Maddon added: “Albert had a day for the ages in center.”

With all that action, Maddon was pretty active, considering he’s just the manager.

“I don’t think I’ve been out on the field that often without getting kicked out, ever,” he said with a smile.

If all that wasn’t enough, the Rockies loaded the bases in the ninth inning as Cubs closer Brandon Morrow was attempting to protect a two-run lead. With two outs, Morrow threw a wild pitch, but catcher Willson Contreras pounced on it as Arenado tried to come home. Morrow covered the plate, getting the tag down as Arenado slid in. Plate umpire Cory Blaser called Arenado safe before replay overturned the call.

“I knew he was out,” Morrow said. “It was like slow motion. Set my glove in front of the bag and let him slide into my glove.”

It ended a crazy afternoon at Coors Field. It’s not the first time that has happened.

“There’s West Texas baseball, then there’s Rocky Mountain high baseball, and you just have to fasten your seatbelt and kick the last field goal,” Maddon said.

More than anyone, Almora was grateful the game ended when it did. He battled the wall and outfield grass in tracking down those fly balls. He waited with hopeful patience as the umpires reviewed that final play.

“I just wanted the game to be over with,” Almora said. “I was like, ‘I think I’m done. I can’t take any more diving plays.'”