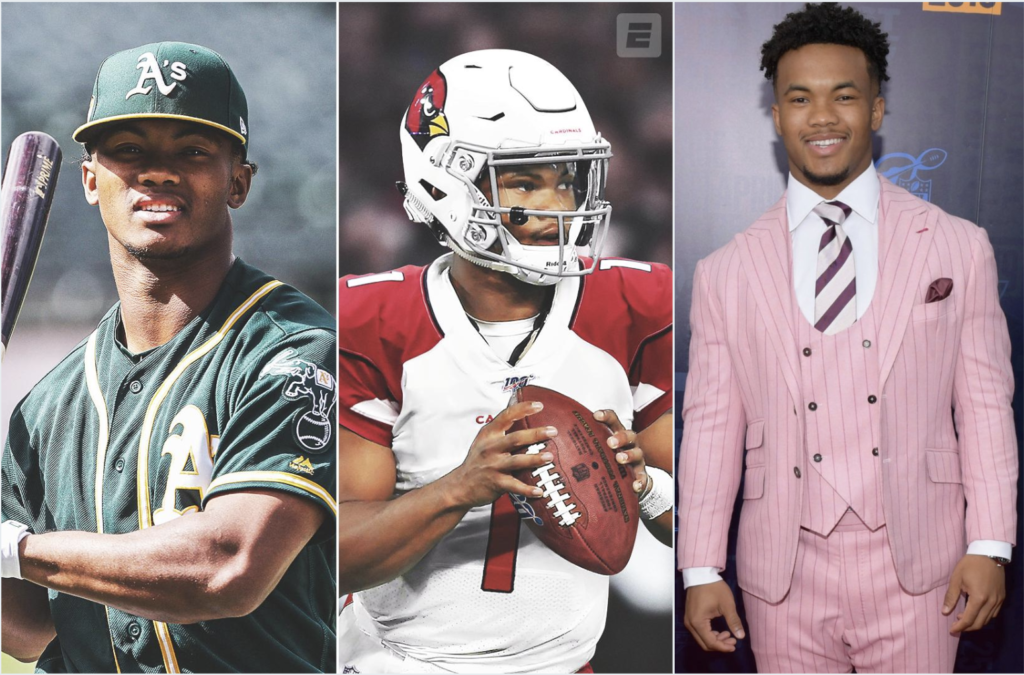 Defying NFL custom and at least temporarily creating a quarterback quandary, the Arizona Cardinals led off the NFL draft on Thursday night by selecting Oklahoma quarterback Kyler Murray, the Heisman Trophy winner. For the second time in a year, Arizona went for a quarterback, having moved up from 15th overall to 10th in 2018 to grab Josh Rosen. NFL teams simply don’t do that, but with a new coach in college-trained Kliff Kingsbury, the Cardinals made the bold move. At least until they likely move Rosen elsewhere in a trade.

“I feel we can be very dangerous,” Murray said. “He’s one of the best in the world at calling plays. I can’t wait to get up there with him. It’s been a long time coming and I hope he feels the same.”

Murray, a first-round baseball pick by the Oakland A’s, becomes the 22nd Heisman Trophy winner to go first overall. He also is the second straight Sooners quarterback to pull it off: Baker Mayfield went to Cleveland in 2018. “BACK TO BACK!!!!! CONGRATS K1!!!! Well deserved my brotha!!!” Mayfield tweeted.

As for bypassing baseball – he was picked by the Oakland A’s in the first round of the MLB draft – Murray has no qualms about the decision. “I love playing multiple sports. I grew up playing multiple sports,” he said. “I just think there’s no reason to limit yourself to one sport. I love to compete, so it wasn’t a big deal for me.”

After Murray, defense became the order of the night. Of the first dozen picks, eight were for that side of the ball, starting with Ohio State edge rusher Nick Bosa, who went to San Francisco as expected. The 49ers have used a first-round selection on four defensive linemen in the past five drafts. Bosa is considered the top pass rusher in this group. His older brother, Joey, plays for the Chargers and was the 2016 Defensive Rookie of the Year. Their father also played in the NFL. “Good genes, man,” Bosa said with a laugh. ““It’s a new journey. I’m so excited to finally be back on a team. I can’t wait to get to work. This is all the work I’ve put in since I was seven years old and it’s finally here.”

The Jets, widely speculated to trade the third pick, used it on Alabama defensive tackle Quinnen Williams, considered by some scouts the best player in this draft. Not even a starter before 2018, Williams won the Outland Trophy last season and is Alabama’s highest-drafted defensive player since linebacker Cornelius Bennett went No. 2 overall in 1987. “It’s just amazing. I’m ready to work now,” Williams said. “I trained with [Jets veteran DL] Leonard Williams, I know Leonard Williams a lot, and to get in there with him, someone I already had a connection with and can learn from, we’re going to get work done.” More defense came with Clemson end Clelin Ferrell going to Oakland and LSU linebacker Devin White to Tampa Bay, both addressing huge needs.

Then came what some considered a surprise when the Giants, looking for Eli Manning’s eventual successor, took Duke quarterback Daniel Jones, the Senior Bowl MVP. Jones generally was not considered a first-round prospect when the college season ended. But he’s been tutored at Duke by David Cutcliffe, who also coached Peyton and Eli Manning in college.

Perhaps the most patient display of the first half of the opening round came from Washington, a franchise not necessarily known for that trait. They sat at 15 and got the quarterback, Ohio State’s Dwayne Haskins, that many believed they would need to trade up for.