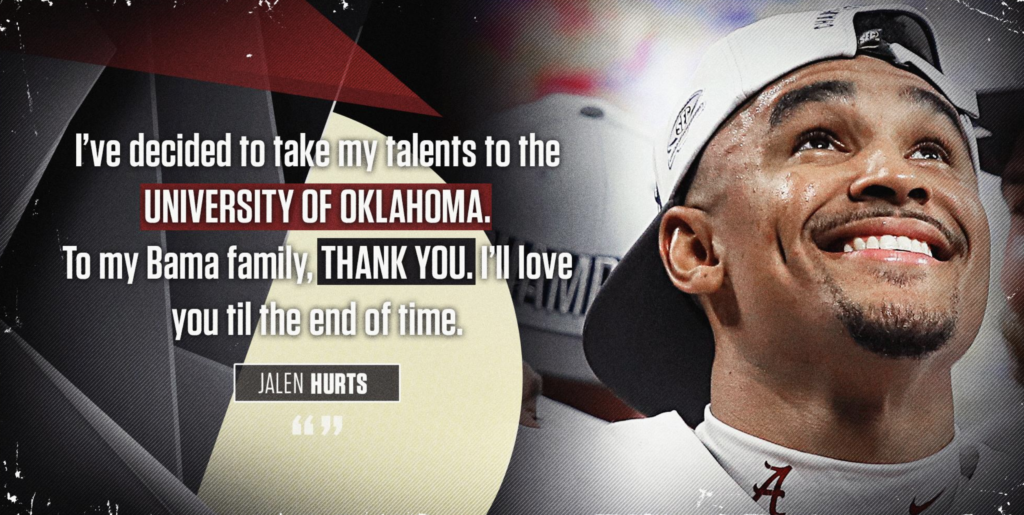 The Sooners don’t rebuild. They reload, with transfer quarterbacks.

Oklahoma’s rise to perennial playoff contender under coach Lincoln Riley has been spearheaded by a pair of transformational transfer quarterbacks, Baker Mayfield and Kyler Murray, who over the past two seasons became the first quarterbacks from the same program to win the Heisman in consecutive years.

Oklahoma has added yet another talented transfer, former Alabama starting quarterback Jalen Hurts, who declared on The Players’ Tribune on Wednesday he would be joining the Sooners, sending a shockwave through the college football landscape.

As the next quarterbacking weapon in Riley’s unstoppable offensive scheme, Hurts has positioned himself to challenge former teammate Tua Tagovailoa, as well as Clemson wunderkind Trevor Lawrence, for next season’s Heisman.

And he has positioned Oklahoma to challenge for a playoff spot for the fourth time in five years.

The fit couldn’t be better — for either.

After leading Alabama to a come-from-behind victory over Georgia in the SEC championship game in relief of an injured Tagovailoa, Hurts declared that his “story wasn’t finished yet.” In transferring to Oklahoma, he ensured that will be the case.

Playing for Riley, one of the pre-eminent offensive minds in college football, Hurts will have a prime opportunity to reinvent his career after losing his job to Tagovailoa despite a 26-2 record as a starter.

The Oklahoma offense will have to adjust to suit Hurts’ skill set, which is that of a dynamic runner above all else. Riley, however, demonstrated the capacity to tailor his scheme to his quarterback, tweaking the offense to fit Murray’s dual-threat ability after three years of Mayfield, whose accuracy and acumen defined the Sooners’ offense.

In either approach, Oklahoma proved to be a juggernaut, as the Sooners led the country in offensive efficiency in 2017 with Mayfield, then in 2018 with Murray, rolling to College Football Playoff appearances in both seasons.

To be sure, the Sooners will have to retool elsewhere around Hurts. Oklahoma lost top wideout Marquise “Hollywood” Brown, who, along with Murray, declared for the NFL draft. The Sooners also have to replace four starters on the offensive line.

But Oklahoma still has the pieces to be a load offensively.

If the defense improves at all under new coordinator Alex Grinch, who arrived earlier this month from Ohio State, the Sooners could win a fifth consecutive Big 12 championship and return to the playoff — potentially giving Hurts the chance to get the best of his former team.

That opportunity is something other programs Hurts visited, including Miami and Maryland, couldn’t realistically offer.

Hurts, meanwhile, as a one-year option, provides Oklahoma with the ideal quarterbacking bridge from Mayfield and Murray to incoming freshman Spencer Rattler, the top quarterback recruit in the country.

Rattler, the highest-rated quarterback prospect Oklahoma has signed out of high school in at least 15 years, won’t arrive in Norman until the summer. Now, with Hurts set to run the show this season, the Sooners can be patient with Rattler and give him the year to learn Riley’s system.