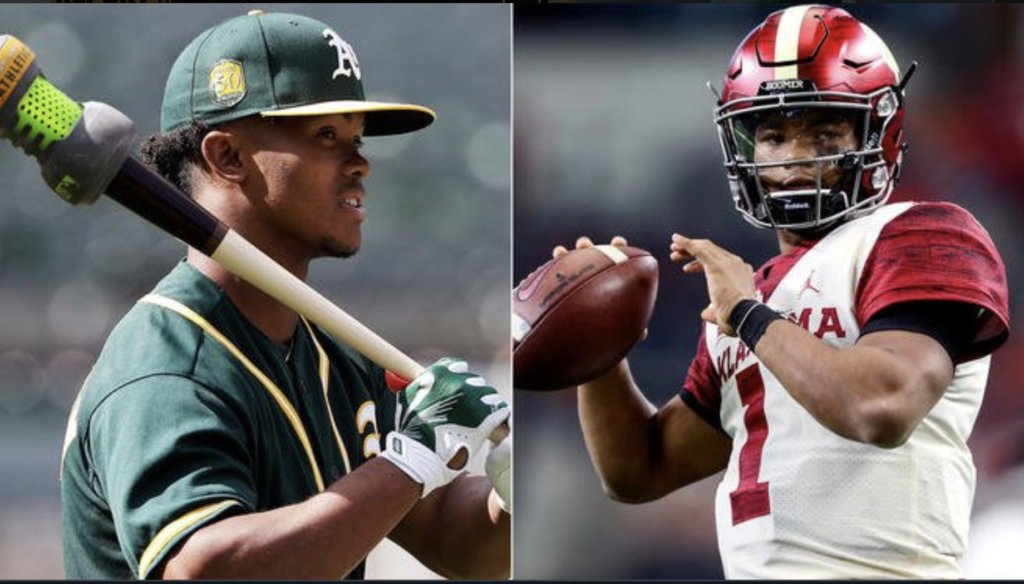 1st Round In 2 Sports. When You Have The Leverage USE IT

Kyler Murray has until Monday to decide whether to declare for April’s NFL draft, and Sunday found the Oakland A’s prospect possibly playing a little hardball. Per reports, the 2018 Heisman Trophy winner is telling the A’s and MLB officials that he wants more money to pass on continuing his football career.

Drafted ninth overall in June as an outfielder after showing impressive improvement while playing baseball last season for Oklahoma, Murray was allowed by Oakland to return to school in the fall to start at quarterback for the Sooners, and the result was a stellar campaign as the successor to 2017 Heisman winner Baker Mayfield. That has some NFL executives said to be evaluating Murray as a likely first-round pick, and the A’s were reported earlier this week to be expecting him to declare for that league’s draft by Sunday.

According to a report Sunday by the San Francisco Chronicle, the A’s still “fully expect” that to happen by Monday’s deadline. That would not rule out Murray ultimately choosing baseball over football, though, and team officials and MLB marketing personnel are trying to convince him to do just that. The Texas native, listed at 5-foot-10, 195 pounds, agreed to a $4.66 million contract with Oakland last year, but it could take considerably more to put a glove and bat in his hands.

Mike Leslie of Dallas’s WFAA reported Sunday that Murray is seeking $15 million, but the Chronicle cited sources with knowledge of the situation who claimed that figure was inaccurate, with reporter Susan Slusser tweeting that a source said Murray has not made any monetary demands of the A’s. Still, the sources said that the sides are working on “something creative,” possibly a scenario in which Murray gets added to the A’s 40-man roster.

Such a move might not only get Murray a bigger payday in the near term, it could drastically reduce the amount of service time he needs to reach free agency. Bill Shaikin of the Los Angeles Times reported that MLB would allow his addition to the 40-man roster as long as it believed he wasn’t promised that before he was drafted. Shaikin noted that if the A’s did that, they would have to keep Murray in the major leagues by 2022 or risk losing him.

While baseball offers the promise of more money for major league players and less risk of injury, if Murray were a first-round pick in the NFL he’d immediately get a bigger contract than the one he currently has from Oakland and could get to a potentially lucrative second contract in four to five more years. With the A’s, he’d likely need a few seasons in the minor leagues, particularly considering he has not been playing baseball full-time since high school. When he reached the majors, if he wasn’t already on the 40-man roster, he’d need three years to reach arbitration and three more to become a free agent.

Because Murray is coming off his junior season and has college eligibility left, he needs to declare by Monday for the NFL draft. But a more pressing deadline could come in mid-February, when A’s players are set to report to spring training. Two weeks after that comes the NFL draft combine and if Murray were intent on becoming a first- or second-round pick, he’d likely need to prepare for the combine, as well as attend it, precluding him from going to Oakland’s camp.

There have been cases of athletes playing professional baseball and football at the same time, including Deion Sanders — who famously suited up for both an NFL game and the World Series on the same day in 1992 — and Bo Jackson. But neither of them played quarterback, the demands of which are thought to preclude devoting time to another sport. Murray would be unusually small for an NFL quarterback, but the league has rapidly come to embrace the types of spread-offense schemes in which he excelled and he would bring elite mobility and an above-average arm.

Perhaps just as importantly for MLB, Murray would bring a high degree of name recognition to a sport that has struggled to develop nationally marketable stars and has seen its percentage of African American players drop from previous decades. That gives the gridiron hero leverage, and it appears he is using it.