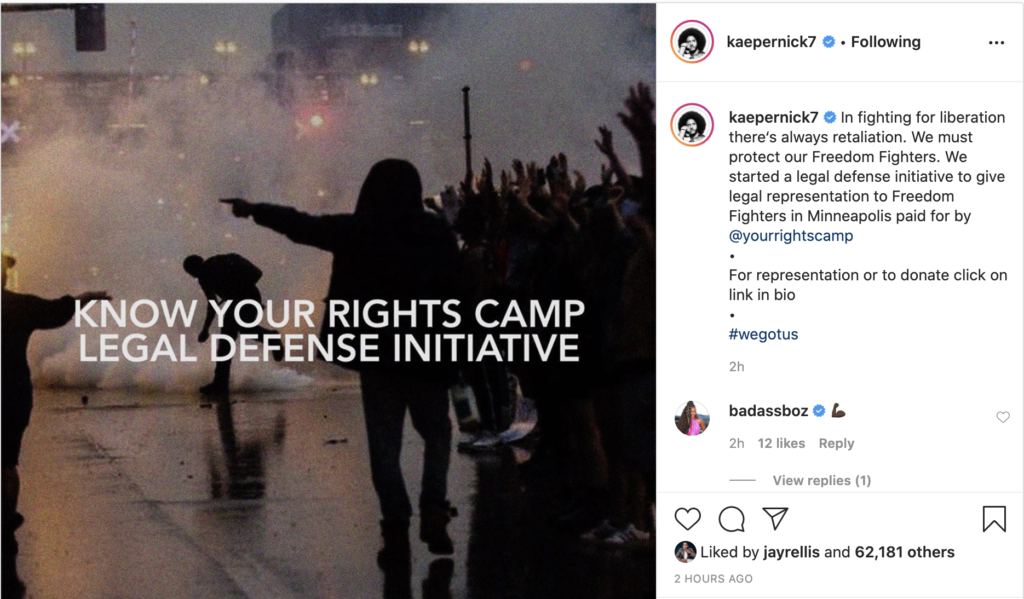 Kaepernick Is Standing Up For Minneapolis

In posts on Twitter and Instagram on Friday afternoon, Kaepernick said legal assistance will be paid for by his Know Your Rights Camp. The group is devoted to educating and empowering young people of color, and developing a new generation of leaders.

“In fighting for liberation there’s always retaliation. We must protect our Freedom Fighters,” Kaepernick said.

Minneapolis has been rocked by protests following the death of George Floyd. Floyd, who was black, died Monday after a white police officer knelt on his neck for eight minutes, ignoring Floyd’s cries that he couldn’t breathe and witnesses’ pleas to stop. A bystander videotaped the encounter.

The officer, Derek Chauvin, and three others who did not intervene were fired. Chauvin was arrested Friday.

Police used tear gas and water cannons on what were largely peaceful protests Tuesday in Minneapolis. The demonstrations have become more violent since then, with several buildings burned and looted. On Thursday night, a police station was taken over and set ablaze.

Kaepernick had expressed support for the protesters Thursday.

“When civility leads to death, revolting is the only logical reaction,” he said in posts on Instagram and Twitter. “The cries for peace will rain down, and when they do, they will land on deaf ears, because your violence has brought this resistance.

“We have the right to fight back!”

Floyd’s death is another example of the police brutality against people of color that prompted Kaepernick, then a quarterback of the San Francisco 49ers, to begin protesting in 2016.