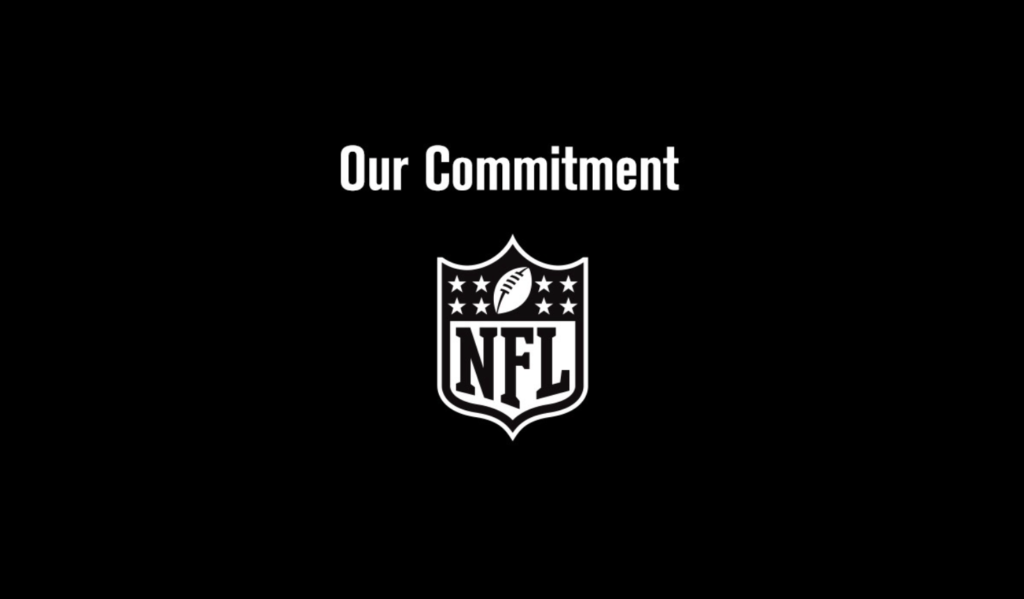 We, the NFL, condemn racism and the systematic oppression of Black People. We, the NFL, admit we were wrong for not listening to NFL players earlier and encourage all to speak out and peacefully protest. We, the NFL, believe Black Lives Matter. #InspireChange pic.twitter.com/ENWQP8A0sv

I’ll Be Damned. The NFL Admits They Were Wrong

NFL Commissioner Roger Goodell issued a video statement on Friday saying “we were wrong for not listening to NFL players earlier” who were protesting police brutality. The statement comes amid nationwide protests over the death of George Floyd, but also years of controversy when the NFL refused to support Colin Kaepernick and other players who knelt in protest over police brutality.

In the roughly minute-and-a-half statement, Goodell did not mention Kaepernick by name but he said the NFL will “encourage all to speak out and peacefully protest.” Goodell said he would be “reaching out” to players who have “raised their voices.”

“Without black players, there would be no National Football League and the protests around the country are emblematic of the centuries of silence, inequality and oppression of black players, coaches, fans and staff,” Goodell said.

Goodell’s statement comes one day after New Orleans Saints quarterback Drew Brees apologized for saying he “will never agree with anybody disrespecting the flag of the United States.” Brees issued an apology after receiving backlash from fellow players and fans for his original comments, but his apology sparked criticism from President Trump.

“I am a big fan of Drew Brees,” Mr. Trump tweeted. “I think he’s truly one of the greatest quarterbacks, but he should not have taken back his original stance on honoring our magnificent American Flag. OLD GLORY is to be revered, cherished, and flown high… We should be standing up straight and tall, ideally with a salute, or a hand on heart. There are other things you can protest, but not our Great American Flag – NO KNEELING!”

Running back Adrian Peterson has already said he will be kneeling when the NFL season starts in September. “Years ago, seeing (Colin) Kaepernick taking a knee, now we’re all ready to take a knee together going into this season without a doubt,” Peterson said while distributing food packages in the Houston area, The Houston Chronicle reported.

Kaepernick, a former quarterback for the San Francisco 49ers, started kneeling during the national anthem in 2016 to draw attention to police brutality.

“I am not going to stand up to show pride in a flag for a country that oppresses black people and people of color,” Kaepernick said in 2016. “To me, this is bigger than football and it would be selfish on my part to look the other way. There are bodies in the street and people getting paid leave and getting away with murder.”

Kaepernick’s protest roiled the NFL, including one game in Buffalo where fans shouted “USA! USA! USA!” while Kaepernick and several other players knelt. Kaepernick was not signed in 2017, but the kneeling protests continued.

The controversy reached Mr. Trump, who encouraged team owners to “fire” players who protested. “They’re ruining the game,” he said during a 2017 political rally in Alabama. At the time, Goodell called Mr. Trump’s comments “divisive” but did not issue support for the players protesting.

Now, San Francisco 49ers coach Kyle Shanahan, who became coach after Kaepernick was not signed, told the Associated Press that Kaepernick deserves respect and admiration for starting the protest.

“I think people understand it so much more now than they did three years ago and I’m all for protests. I’m all for change,” Shanahan said. “What’s different now and then, it’s embarrassing to say, probably, but I think white people are more passionate about it now than then …. Whatever’s got to get changed, let’s do it.”