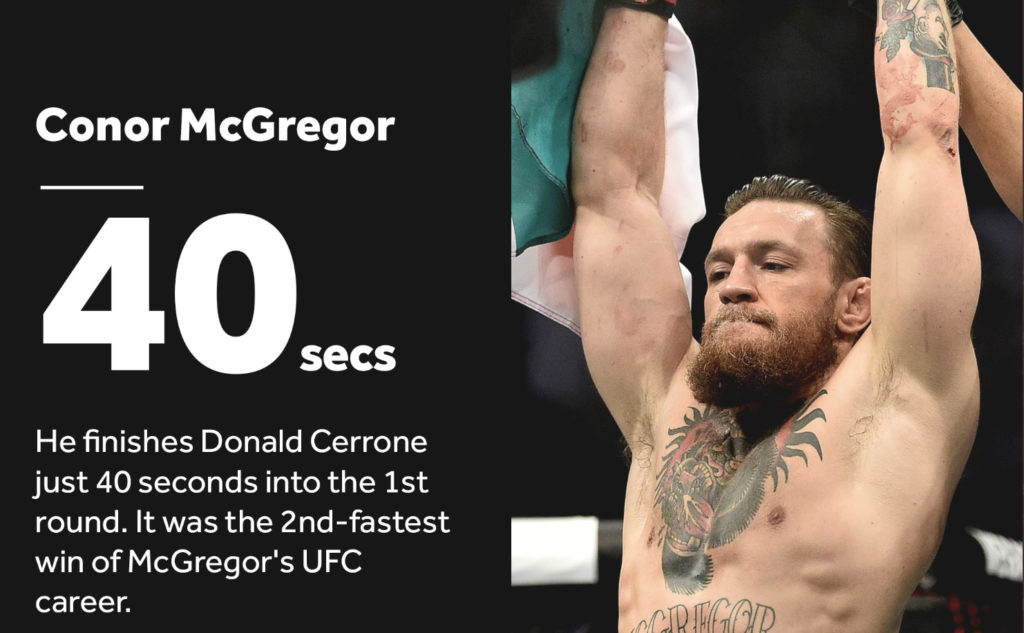 He ended all of the doubts in a stunning and spectacular knockout Saturday of Donald “Cowboy” Cerrone, winning for the first time since he finished Eddie Alvarez on Nov. 5, 2016, to claim the UFC’s lightweight title.

In the main event of UFC 246 on Saturday at T-Mobile Arena, McGregor laid waste to Cerrone in 40 seconds, delighting the standing-room only crowd with a brilliant performance.

McGregor kicked Cerrone in the head, dropping him with a thud. Once the best finisher in the sport, McGregor wasted no time to get on Cerrone and finish him. Referee Herb Dean pulled him off as Cerrone just turtled up to defend himself against the powerful blows.

“They can give fighters made up belts, but they can’t give fighters knockouts across three weight divisions,” McGregor said jubilantly.

McGregor missed a huge left hand as the fight began. But he clinched with Cerrone in the center of the cage and belted him in the face twice with his shoulder, appearing to break Cerrone’s nose.

That turned Cerrone woozy and he admitted he was stunned by it.

“One hundred percent [it surprised me],” Cerrone said. “I’ve never seen anything like that.”

McGregor, a former featherweight and lightweight champion, fought like the man who vaulted to the top of the pound-for-pound lists and became a world champion in 2013 and 2014.

He was fast, aggressive and very astute.

He said he’d plan to stay at welterweight, where there are a lot of great fights for him. BMF champion Jorge Masvidal was seated at ringside and wants McGregor. Welterweight champion Kamaru Usman also expressed interest in a bout with McGregor, the biggest draw in the sport.

A McGregor win was huge for the UFC, especially since it was so quick, because he could come back to fight again as soon as March. He said before the fight if he came out of this fight clean, he’d be interested in UFC 248 in Las Vegas in March.

It sets him up for another big year, though it’s been a while.