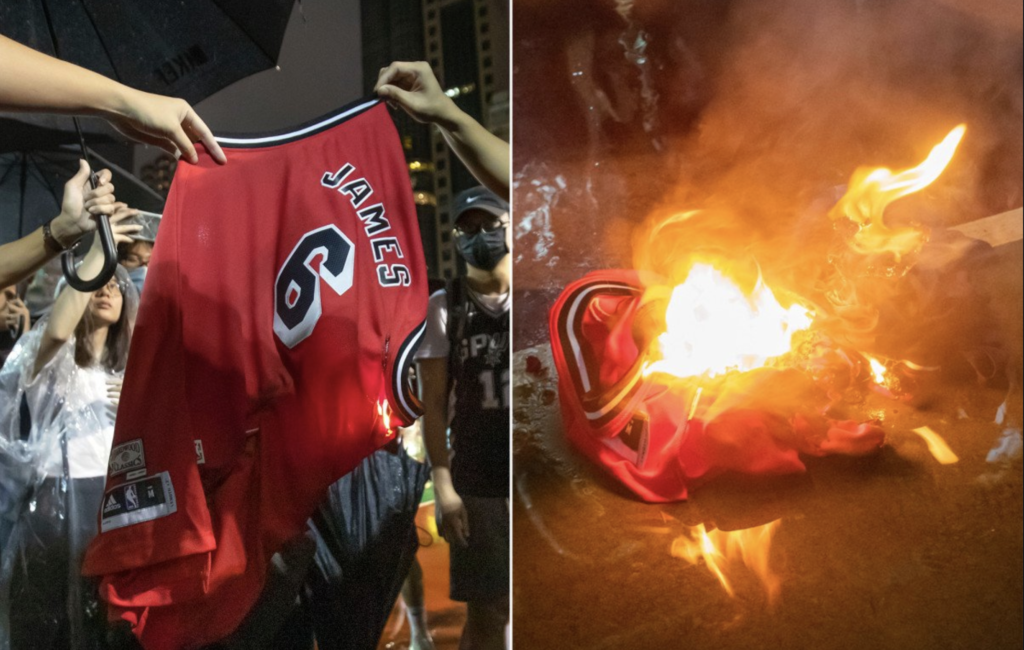 LeBron Shoulda Left This One Alone

LeBron James on Monday night sharply criticized Daryl Morey, the general manager of the Houston Rockets, for his recent tweet in support of Hong Kong’s pro-democracy protesters. The tweet set off a furor for the N.B.A. last week while James and the Los Angeles Lakers were in China.

“I believe he wasn’t educated on the situation at hand, and he spoke,” James said, referring to Morey. “So many people could have been harmed, not only financially, but physically, emotionally, spiritually.”

James was making his first public comments since the team’s trip to China, where the Lakers played a pair of preseason games against the Brooklyn Nets. But Morey’s tweet — a picture with the slogan, “Fight for freedom, stand for Hong Kong,” which he later deleted — shaped the backdrop for the entire trip.

The fallout was swift, as Chinese companies pulled their sponsorships and enacted a media boycott of the N.B.A., which included canceling the local broadcasts of both games between the Lakers and the Nets. The N.B.A. has spent decades cultivating the Chinese market, but suddenly felt the full force of a geopolitical storm — all seemingly caused by a single tweet.

At a news conference last week, N.B.A. Commissioner Adam Silver defended Morey’s right to publicize his views, saying, “We will protect our employees’ freedom of speech.” And while the league acknowledged the offense the tweet had caused, it stopped short of apologizing to the Chinese government.

On Monday, James waded back into the maelstrom by holding a seven-minute news conference before the Lakers played the Golden State Warriors in a preseason game at Staples Center. He said that Morey had caused a lot of problems for the players while they were in China — and went so far as to suggest that he could have endangered them.

“Yes, we do all have freedom of speech,” James said. “But at times there are ramifications for the negative that can happen when you’re not thinking about others and you’re thinking about yourself.”

Asked why he felt Morey had been ill-informed on the subject, James said: “That’s just my belief. I don’t know. That’s my belief. That’s all I can say. I believe he was misinformed or not really educated on the situation. And if he was, then so be it.”

James, like many star players in the N.B.A., has large business interests in China through sponsors like Nike. He declined to offer his views of the political situation in China, saying he did not know enough about it to offer an informed opinion.

“For me personally, I’ve always been welcomed with open arms,” he said. “I’ve been to China probably over 15 to 20 times, and the main reason I’ve always wanted to go back to China is because of the game of basketball. The game of basketball has brought people together in so many different facets, in so many different countries — people you would never, ever expect.”

Almost as quickly as his news conference was finished, James was the subject of widespread backlash on social media. Senator Rick Scott, Republican of Florida, was among those who weighed in on Twitter: “It’s sad to see him join the chorus kowtowing to Communist China & putting profits over human rights for #HongKong.”

About an hour after his news conference, James began some damage control of his own on Twitter.

“Let me clear up the confusion,” he wrote in one of his posts, referring to his take on Morey’s tweet. “I do not believe there was any consideration for the consequences and ramifications of the tweet. I’m not discussing the substance. Others can talk about that.”

On Tuesday in Hong Kong, about 100 basketball fans stood on a court in the Wan Chai neighborhood, thanking Daryl Morey for his support at an event they called “Stand with Morey.”

Some fans burned James jerseys. Others shot basketballs at a hoop with a picture of James taped to the backboard. Others created memes with his picture.