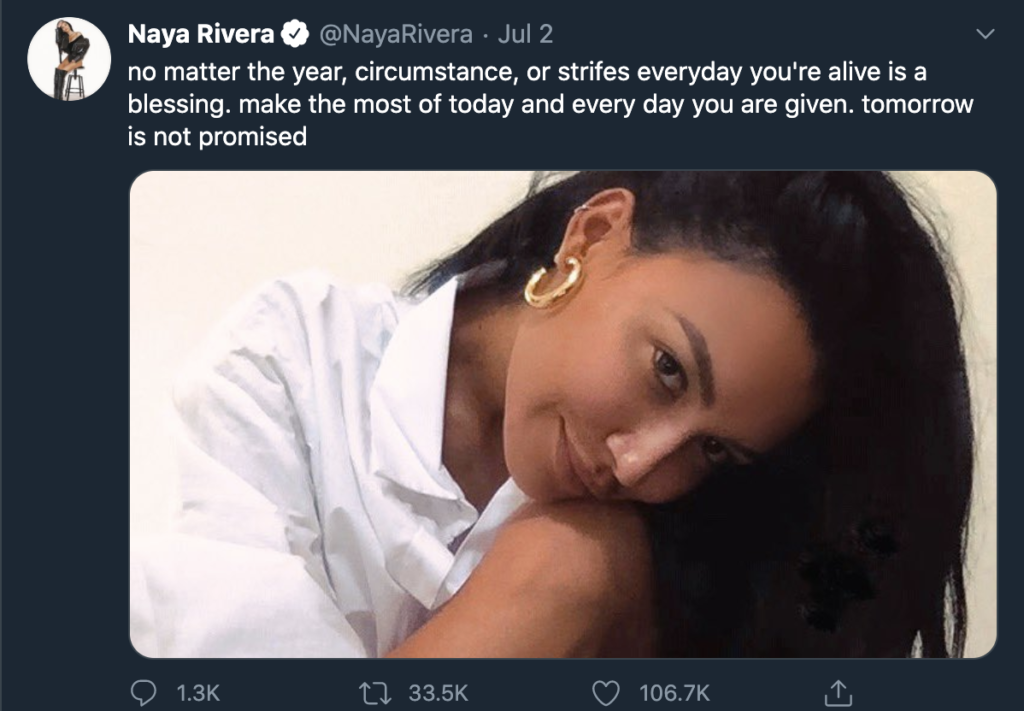 Naya Rivera drowned in what appears to be “a tragic accident,” according to investigators. The Ventura County Sheriff’s Office held a press conference on Thursday afternoon after confirming the search for the missing Glee star has turned into a recovery mission.

“This is a terrible tragedy,” Captain Eric Buschow said. “We hope to bring closure to that family… We’re going to do everything we can to find her.”

Rivera, 33, never returned from a swimming excursion with her 4-year-old, Josey Dorsey. The actress’ son was found unharmed on the boat she rented, which was drifting in Lake Piru, Calif. Video from the dock shows Rivera and her son were the only two people on board.

“How long it had been unmanned, we don’t know,” Buschow said.

Rivera rented a pontoon boat for three hours at 1 p.m. PT on Wednesday. When she didn’t return at 4 p.m. PT, workers went out to look for them. They found her son sleeping on the boat and called 911. The boy had been wearing a life vest, but investigators don’t believe Rivera had been wearing one as a second life vest was found inside the boat. Rivera’s purse and ID were also located on board, Buschow revealed. It’s unclear how her son got back on the boat. It’s also unknown how long she was in the water with her son.

Rivera’s son told investigators that he and his mother had been swimming in the lake and that he got back in the boat, but his mother did not. While an investigation is ongoing, Buschow told reporters they have enough information to conclude “that she never made it out of the water.” He added “that the focus of our search efforts are in the water at this time.”

“I think it’s too early to say what happened here,” he cautioned. “We’re still investigating… it’s not uncommon we have boating accidents and people lose their lives. … We have had drownings here.”

According to Buschow, Rivera had previously been to Lake Piru, which is about an hour outside of Los Angeles.

“She had had experience boating on this lake before,” he said. When asked by a reporter if Rivera was a strong swimmer, Buschow said he didn’t know, but noted that swimming is permitted in the lake.

“There’s really no strong undercurrents like you have in the ocean, but sometimes the water can be very cold,” Buschow shared, but added he didn’t know, yet, if that was a factor in Rivera’s likely drowning. He also didn’t know the temperature of the water on Wednesday afternoon.

The boat was found floating in an area estimated to be 30 feet deep with 15 feet visibility in the northern part of the lake, which is the area currently being searched. There are a lot of trees underwater in the area. When asked how long it can take for a body to be recovered from the lake, Buschow told reporters it could be anywhere from two days to a week, but added, “If the body is entangled in something beneath the water it may never come back up.”

Buschow said it’s “going to be a slow search process” due to difficult conditions. When the search resumed Thursday morning, divers were experiencing less than one foot of visibility in the water in daylight.

The Los Angeles County Sheriff’s Department is assisting in the search with divers and sonar equipment. Approximately 100 personnel are participating in the recovery operation, including resources from neighboring counties and the United States Coast Guard. Buschow said they will do everything they can to bring closure to the family.

Buschow also confirmed Josey Dorsey, whom Rivera shared with ex-husband Ryan Dorsey, is with family. Father and son were photographed together on Thursday.