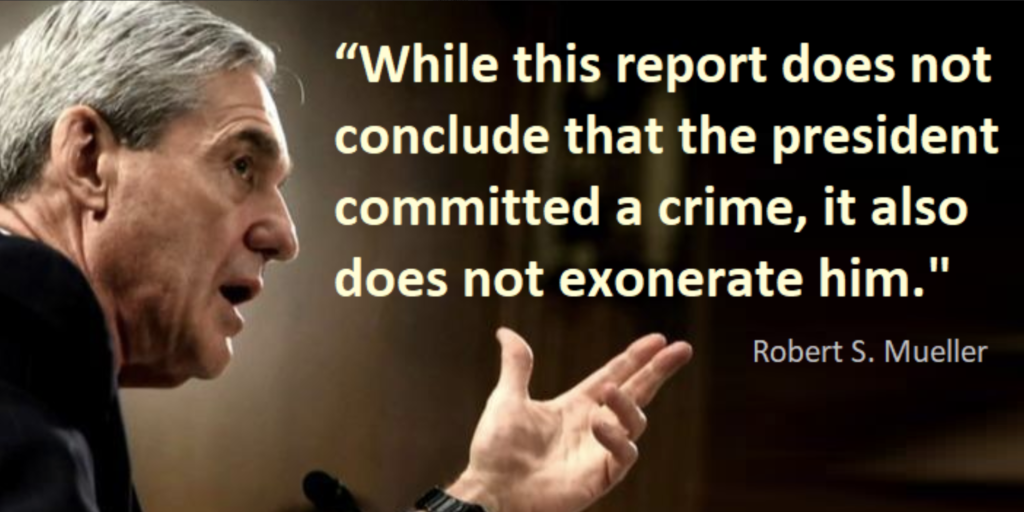 U.S. Attorney General William Barr said on Sunday that Special Counsel Robert Mueller had found no evidence of collusion between President Donald Trump’s election team and Russia, and did not present enough evidence to warrant charges of obstruction of justice.

In a major political victory for Trump, who quickly hailed the announcement as “complete and total exoneration,” Mueller’s nearly two years of investigation ended with a finding that no one in Trump’s campaign “conspired or coordinated with the Russian government,” according to a summary of Mueller’s findings.

The long-awaited report into whether Trump’s campaign colluded with Russia to help Trump defeat his Democratic opponent, Hillary Clinton, marked a major milestone of his presidency as he prepares for his 2020 re-election battle. But Democratic opponents made clear that it would not end their political assault against him.

Mueller himself did not reach a conclusion on whether Trump broke the law by interfering with the various probes into the 2016 election but presented his evidence to Barr to make a determination. Many of Trump’s opponents had accused the president of obstructing the Russia probe when he fired former FBI Director James Comey.

Barr and Deputy Attorney General Rod Rosenstein concluded that the evidence did not justify bringing obstruction charges, in part because there was no underlying crime.

“While this report does not conclude that the president committed a crime, it also does not exonerate him,” Barr quoted Mueller as writing in his report on the issue of possible obstruction of justice.

Barr made clear he had rejected that possibility of a criminal charge after reviewing the findings of an investigation that has long cast a pall over Trump’s presidency.

“It’s a shame that our country had to go through this,” Trump told reporters before boarding Air Force One to return to Washington from Florida. “This was an illegal takedown that failed. And hopefully, somebody’s going to be looking at the other side.”

Barr’s summary said Mueller found no evidence that the Trump campaign coordinated with Russia, despite “multiple offers from Russian-affiliated individuals” to help them.

U.S. Rep. Jerrold Nadler, Democratic chairman of the House Judiciary Committee, said it “seems like the Department of Justice is putting matters squarely in Congress’ court.”

The release of the summary is likely to ignite a new political fight in Washington as Democrats push for Barr to release the full report, and Trump seizes on the findings as vindication of his near daily assertion that he was a victim of a “witch hunt” that has cast a long shadow over his presidency.

Although the Justice Department’s summary rules out any conspiracy with Russia by the Trump campaign and associates, it leaves uncertainty over the question of obstruction of justice.

Mueller declined to draw a conclusion on whether Trump’s conduct constituted obstruction, flagging “‘difficult issues’ of law and fact concerning whether the President’s actions and intent could be viewed as obstruction,” according to Barr, who said that decision was left to him.

In his letter to lawmakers, Barr concluded that there was not enough evidence to move forward with such a charge.

“The report identifies no actions that, in our judgment, constitute obstructive conduct, had a nexus to a pending or contemplated proceeding, and were done with corrupt intent … each of which … would need to be proven beyond a reasonable doubt,” Barr explained in his letter to lawmakers.

Nadler called for Barr to testify to Congress, citing “very concerning discrepancies and final decision making at the Justice Department.”

Trump has always denied collaborating with Moscow or obstructing justice and Russia says it did not interfere in the election.

U.S. intelligence agencies concluded shortly before Trump took office in January 2017 that Moscow meddled in the election with a campaign of email hacking and online propaganda aimed at sowing discord in the United States.

The Department of Justice announced on Friday that Mueller had ended his investigation after bringing charges against 34 people, including Russian agents and former key allies of Trump, such as his campaign chairman Paul Manafort, former national security adviser Mike Flynn and his personal lawyer Michael Cohen.

None of those charges, however, directly related to whether Trump’s campaign worked with Moscow.