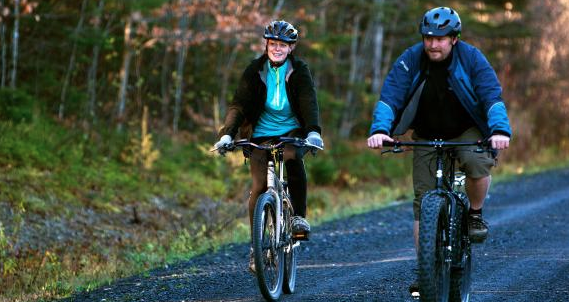 Nurse Under Ebola Quarantine Goes for a Bike Ride

A nurse who treated Ebola patients in Sierra Leone but has tested negative for the virus ventured out of her home in Maine and took a bike ride on Thursday, defying a quarantine order and setting up a legal collision with state authorities.

Attorneys for Kaci Hickox, 33, said they had not yet been served with a court order to enforce a 21-day quarantine – matching the virus’s maximum incubation period – but remained prepared to fight such an order if necessary.

Hickox left her home in the small Maine town of Fort Kent, along the Canadian border, and television news images showed her taking a morning bicycle ride with her boyfriend. Hickox has given the state a deadline of Thursday to lift an order that she remain at home until Nov. 10, or she will go to court.

“It’s a beautiful day for a bike ride,” said Hickox, dressed in bike gear including a helmet as she headed out for a three-mile (5 km) ride while police stationed outside her house stood by without trying to stop her, according to local media.

President Barack Obama, who has criticized state mandatory quarantine policies for returning medical workers like Hickox, was scheduled to arrive in Maine later on Thursday to campaign for Democratic candidates including Mike Michaud, who is trying to unseat LePage in Tuesday’s mid-term elections.

Norman Siegel, one of Hickox’s lawyers, defended her decision to go for a bike ride as a public statement but noted that she avoided the center of town so as not to “freak people out.”

“Since there’s no court order, she can be out in public,” Siegel said. “Even if people disagree with her position, I would hope they respect the fact that she’s taking into account the fear, which is based on misinformation about the way the disease is transmitted.”

Medical professionals say Ebola is difficult to catch and is spread through direct contact with bodily fluids from an infected person and is not transmitted by asymptomatic people. Ebola is not airborne.

Siegel also criticized LePage for stoking fear of Ebola rather than using his office to educate the public about the disease.

The nurse’s confrontation with Maine officials highlights how states have been struggling to protect their citizens from Ebola without resorting to overzealous, useless precautions or violating civil rights.

Hickox says she is completely healthy and has been monitoring her condition and taking her temperature twice a day.

Hickox tested negative for Ebola after returning from working with the humanitarian group Doctors Without Borders in Sierra Leone, one of the three impoverished countries at the heart of an outbreak that has killed about 5,000 people.