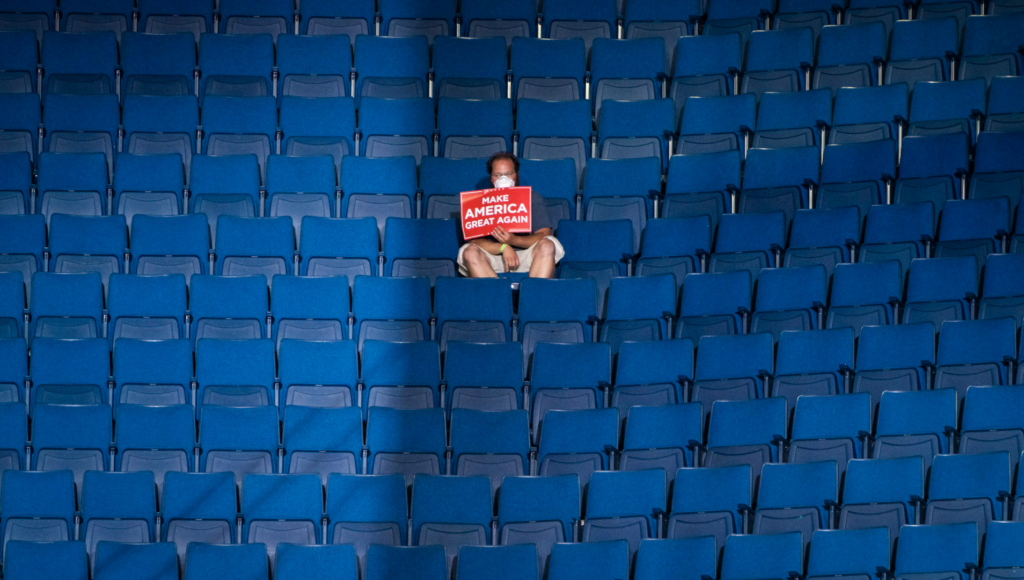 Poll Numbers No Good? Fire Someone

President Donald Trump has orchestrated a shakeup of his struggling reelection campaign with less than four months to go, elevating Bill Stepien to campaign manager and demoting Brad Parscale, who had been serving in that role.

Trump posted to Facebook on Wednesday evening that Parscale will remain on the campaign as a senior adviser.

The move comes amid falling poll numbers and mounting worries over the president’s political prospects, with Trump himself expressing concern that he’s losing to Joe Biden. Parscale has been under the microscope in recent weeks, particularly following Trump’s half-capacity rally in Tulsa, Okla. Parscale was blamed internally for the rally after boasting beforehand that over 1 million people had signed up to attend. In private, the president repeatedly criticized Parscale for the episode.

Replacing Parscale is a classic move from the Trump playbook: The president replaced two campaign managers during his 2016 campaign before his surprise victory, and he has cycled through four chiefs of staff in less than four years in the White House.

But the type of attention-grabbing shakeup Trump has long favored doesn’t address the fundamental problems he faces with 111 days left until the election: Americans are dying, sick and out of work as coronavirus spreads throughout the nation, and voters have harshly judged his response to the pandemic, sending his popularity lower than it’s been for most of his presidency. Meanwhile, Biden has established wide leads in national polls and surveys of key swing states, threatening to not only flip back the Midwest but challenge Trump in longtime Republican strongholds in the South and Southwest, like Arizona and Georgia.

Trump began informing advisers of the shakeup Wednesday before making the announcement official. Replacing Parscale had been under consideration for about a month prior to Wednesday’s announcement, people close to the president said.

Parscale, who managed Trump’s digital advertising during the 2016 campaign and was named campaign manager in 2018, spent months building a more professionalized reelection campaign that was in stark contrast to the chaotic 2016 operation. Under his leadership, the campaign had remained largely stable until recently, as the president turned his eye more and more to the election. Some party officials were stunned by the suddenness of the shakeup.

Parscale will remain focused on his specialty areas, digital politicking and data management, according to people briefed on the campaign shakeup. The former campaign manager has played a key role in building up Trump’s campaign into a small-donor juggernaut, raking in millions of dollars per month via email and other digital appeals in addition to big-dollar events starring Trump, Vice President Mike Pence and others.

Stepien is a longtime Trump adviser. After joining the president’s campaign in the summer of 2016, he went on to become White House political director. After the 2018 midterms, he left the White House to join the reelection effort as a consultant. He was recently promoted to deputy campaign manager, a move intended to bolster Parscale amid the campaign’s struggles. Like Parscale, Stepien is close to Kushner.

Prior to joining Trump’s orbit, Stepien served as a top political adviser to ex-New Jersey Gov. Chris Christie, who cut Stepien loose over emails in which he dismissed the George Washington Bridge scandal as “fine” and mocked the mayor of Fort Lee, N.J. as an “idiot.” Another Christie aide later testified that he told Stepien about the “Bridgegate” scheme, which was designed to snarl traffic in Fort Lee as political retribution against the mayor. Stepien has denied knowing about the plan and was not charged with a crime.

Stepien’s elevation is the latest in a series of moves the president has made to revamp his faltering campaign in recent weeks, as his closest confidantes sounded the alarm about his standing. Last month, the president had dinner with Home Depot co-founder Bernie Marcus, a Republican megadonor, who suggested he make changes.

Trump recently re-hired Jason Miller, who was a top aide in 2016, and in late June, Trump loyalist Michael Glassner was replaced as chief operating officer by 2016 campaign adviser Jeff DeWit. Meanwhile, Trump’s son-in law, Jared Kushner, has been asserting more control over the president’s political apparatus behind the scenes. Kushner has been a key player in orchestrating the recent staff moves.