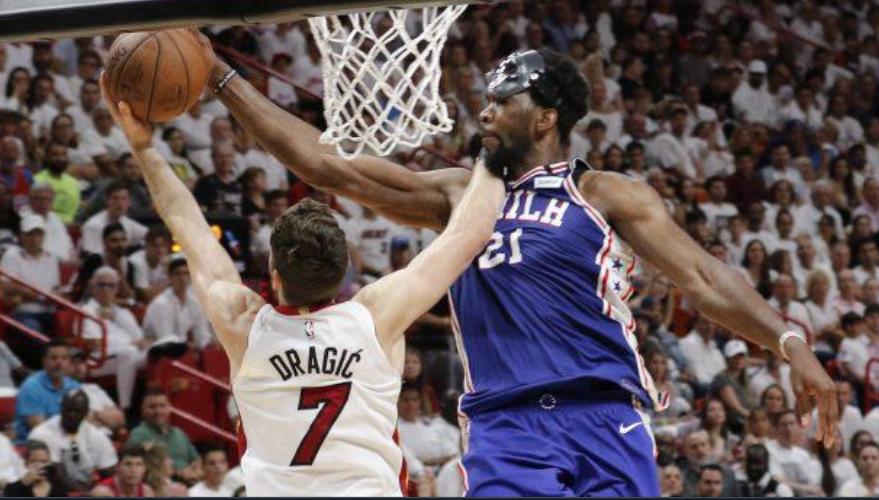 The NEW Beast of The East

The 76ers might very well be the NBA’s team of the future.

And that future might be starting sooner than many envisioned.

Simmons was the first rookie to since Magic Johnson in 1980 to have a playoff triple-double, Redick led Philadelphia with 24 points and the 76ers moved one win from the second round by topping the Miami Heat 106-102 on Saturday to take a 3-1 lead in their Eastern Conference first-round series.

“I’m shocked that we won this game,” 76ers coach Brett Brown said. “We really didn’t have a right to win the game.”

Here’s why he said that: His team turned the ball over 27 times, shot 7 for 31 from 3-point range and trailed by 12 late in the third quarter in an extremely hostile environment against a desperate opponent.

Despite it all, the 76ers were unfazed.

Philadelphia turned a 10-point deficit into a seven-point lead with a 19-2 run that ended midway through the fourth quarter, then absorbed the best shot Dwyane Wade could throw at the 76ers in the final minutes before heading home with a chance to close the Heat out in Game 5 on Tuesday.

Wade led all scorers with 25 points off the Heat bench, 12 of them coming in the fourth. But it wasn’t enough.

“They don’t let you off the hook,” Wade said, tipping his cap to the 76ers. “You make one mistake, or you take your foot off the gas for one second, they make you pay.”

Wade doesn’t have a contract for next season. He’s said if he plays, he’ll be back with Miami — though there’s no guarantees.

And that means Saturday might have been his last home game in a Heat uniform. If he knows what the future holds, he didn’t offer any hints.

“I’m focused on the next game, trying to win that one,” Wade said.

Simmons became the first rookie since Magic Johnson in 1980 to post a playoff triple-double — 17 points, 13 rebounds, 10 assists. Joel Embiid finished with 14 points and 12 rebounds for Philadelphia.

Wade carried the comeback effort, with the Heat down six and less than 2 minutes left. His three-point play cut the margin in half and his next two field goals got Miami within one each time.

The Heat got no closer.

Goran Dragic scored 20, James Johnson had 15 and Hassan Whiteside finished with 13 points and 13 rebounds for Miami, which now needs to pull off some history. The Heat have erased a 3-1 deficit only once, in 1997 against New York.

“We all feel that we’re this close,” said Heat coach Erik Spoelstra, holding his thumb and index finger maybe a millimeter apart. “That’s what makes this game tough. They made bigger plays than us in the fourth quarter.”

Miami held slim leads at the half — 2-0 in players who went to the locker room injured, 4-0 in stitches received, 61-56 on the scoreboard.

A wild scene was the story of the second quarter. Philadelphia’s Dario Saric was driving from the right wing and had his dribble knocked away by Justise Winslow, and four players wound up on the floor as they went for the loose ball. Josh Richardson took the worst of it, getting slammed into by Embiid. Richardson stayed down for more than a minute, eventually getting helped to his feet and to the Miami locker room.

All eyes were on the other end, where Dragic was shoved to the floor by Robert Covington. James Johnson — a black belt and MMA fighter — took exception and went toward Covington, so Simmons came in for a few words.

“He was protecting his guy,” Covington said of Johnson.

The 76ers kept hitting Miami in the second half too, albeit on the scoreboard. And now Tuesday awaits, with Philadelphia — coming off a Super Bowl title and Villanova’s NCAA crown — on the brink of another celebration.

“We’ve got to finish it,” Simmons said.