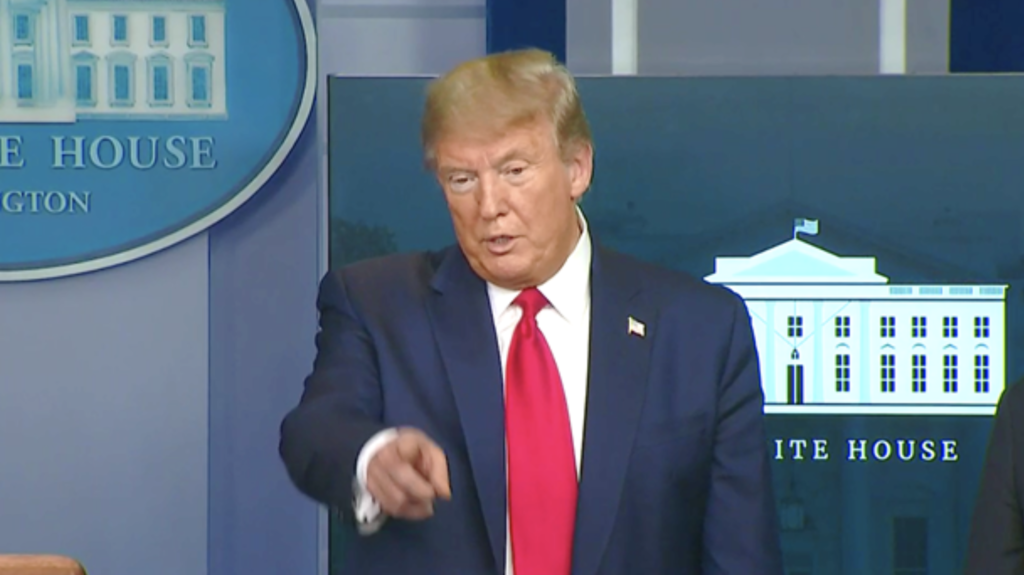 The President Did Not Have A Good Day Today

Donald Trump’s daily coronavirus task force press briefings stopped being about the coronavirus weeks ago. Any necessary or potentially helpful announcements have largely been supplanted by hours-long recitations of Trump’s various grievances, his imagined accomplishments, and all the people who have most recently wronged him. But today, amid mounting criticism, the president somehow managed to reach a new level of self-pitying psychosis, taking more than an hour out of a press conference on a disease that has killed over 20,000 Americans to lash out about his treatment by the media, and to show his very own propaganda reel.

Before things really got underway, Anthony Fauci took the stage to ostensibly “clarify” comments he’d made to Jake Tapper this past weekend, when he said, “You could logically say that if you had a process that was ongoing and you started mitigation earlier, you could have saved lives.” The comments seemingly prompted Trump to retweet someone who had used the hashtag #FireFauci.

Fauci was then asked whether he was making this statement voluntarily, or if it was at the president’s behest. Fauci said “Everything I do is voluntarily,” sidestepping the opportunity to specify whether or not Trump had requested the performance.

Shortly after Fauci’s performance, Trump presented the assembled press with a video, put together by White House staff hours prior, which was meant to portray Trump (and, at one point, Sean Hannity) as having initially identified the threat coronavirus posed while everyone else was still passive or unaware.

Trump introduced the reel by complaining about a New York Times article from this past weekend that documented how the president’s numerous personal failures left his administration devastatingly unable and unwilling to take action in the early days of the virus.

Trump’s outbursts in the briefing led to a number of uncomfortable moments. In the clip below, for instance, Trump asserted that “Anthony said I saved a lot of lives by [restricting travel from China].” Trump then turned to Fauci and asked, “Am I correct? I don’t want to put words in Anthony’s mouth, by the way. And I like him! Today I walk in, and I hear I’m going to fire him. I’m not going to fire him! I think he’s a wonderful guy.” Throughout all of this, Fauci remained silent.

After some ranting from Trump about his Jan. 31 restrictions on travel from China—the lone action he undertook to address the oncoming pandemic, while disease-testing programs and medical equipment stockpiles were neglected—the reporter asks, “What did your administration do in February with the time your travel ban bought?”

This was the president’s response:

A lot. A lot! And in fact, we’ll give you a list. We did a lot. Look, you know you’re a fake. You know that. Your whole network, the way you cover it is fake. And most of you—not all of you—but the people are wise to you. That’s why you have a lower approval rating then you’ve ever had before times, probably, three. And when you ask me that question—let me ask you this. Why did Biden apologize? Why did he write a letter of apology? That’s very important. Why did the Democrats think I acted too quickly? You know why? Because they really thought that I acted too quickly. We have done a great job.

In all, today’s briefing lasted over two hours.