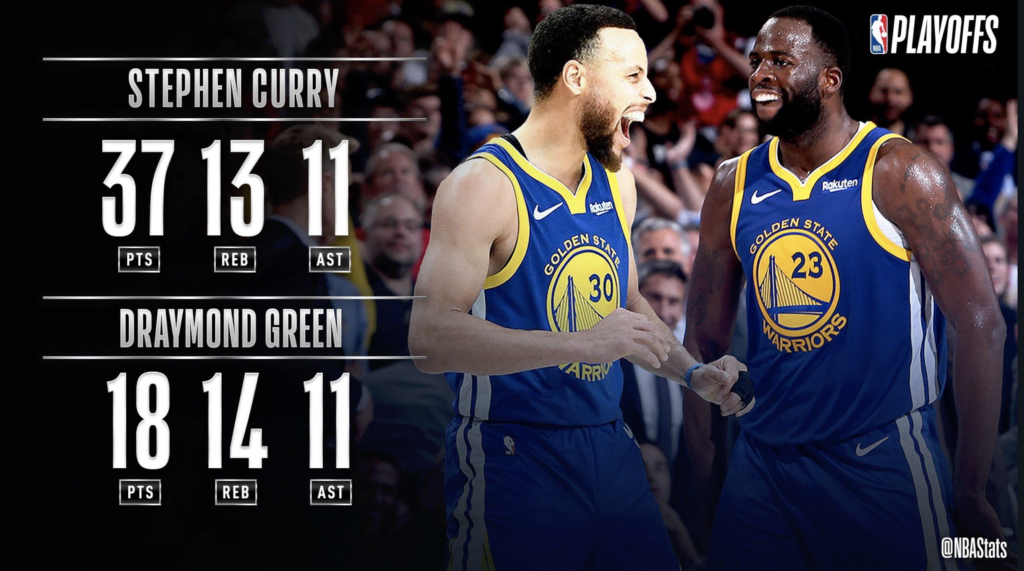 There is Only One Curry

Competitive sweep? It sounds like an oxymoron, but it provided a bit of consolation for the Portland Trail Blazers after the franchise’s longest playoff run in 19 years ended with a four-game dismissal by the dynastic Golden State Warriors in the Western Conference finals.

“We were very competitive in this series, even though it was a sweep,” Portland coach Terry Stotts said after what he described as a “special season” ended with a 119-117 overtime loss in Monday’s Game 4.

The Trail Blazers led for more minutes in the series than the Warriors by a 101-83 margin. Portland’s problem, however, was that no lead was large enough against Golden State.

“We had to fight and scrap,” Warriors coach Steve Kerr said after Golden State clinched its fifth consecutive NBA Finals appearance. “In the end, it’s a sweep, but we had to scrap and claw for three of the four victories. This was more difficult than it appeared.”

Portland had legitimate opportunities to win Games 2 and 4 but faltered offensively down the stretch. The Trail Blazers scored only 19 points on 8-of-29 shooting in 14 clutch minutes during the series, situations defined by the score being within five points in the final five minutes of regulation or overtime. That included six points on 3-of-10 shooting in overtime Monday, when Blazers star Damian Lillard missed a corner 3-pointer in the final seconds that could have been the game winner.

“It’s the furthest that we have played into the postseason, and that’s a little deeper water than what we’ve seen,” said Lillard, who had 28 points and 12 assists in Game 4, his best performance of the series. “It’s a little bit more physically and mentally trying. The level of play is higher. There’s more on the line. Teams take their scouting reports and detail it to the next level. I think it was a great experience for us. …

“I think we showed that we’re capable of being here and competing at this level. But it’s definitely different.”

By and large, the Blazers considered the results of the series to be more of a testament to Golden State’s greatness than an exposure of Portland’s flaws.

“Give the Warriors credit,” said Portland center Meyers Leonard, who did not play in Game 1 because of a coach’s decision and scored a career-high 30 points and grabbed 12 rebounds in Game 4. “They have kind of been there, done that, obviously. They are able to sustain a certain level of play and execution that clearly allowed them to find their way back the last three games.”

It marked the third consecutive year that Portland’s postseason ended with a sweep, but the Blazers walked out of the Moda Center on Monday night with their heads held much higher than after their previous two exits. They failed to win a playoff game the past two years, getting swept by the Warriors in 2017 and the New Orleans Pelicans last season.

This postseason run represented remarkable progress for Portland, a popular preseason pick to fall out of the Western Conference playoff picture. The Blazers claimed the conference’s third seed with a 53-win regular season. Then, they closed out the first round in five games when Lillard waved goodbye to the Oklahoma City Thunder by capping his 50-point performance with a tie-breaking, 37-foot buzzer-beater. In the conference semifinals, they won a road Game 7 over the Denver Nuggets.

“I think it was a special season for us,” Lillard said. “We’re coming off back-to-back sweeps. I mean, it’s another sweep, but you’d rather get swept in the Western Conference finals than in the first round.”