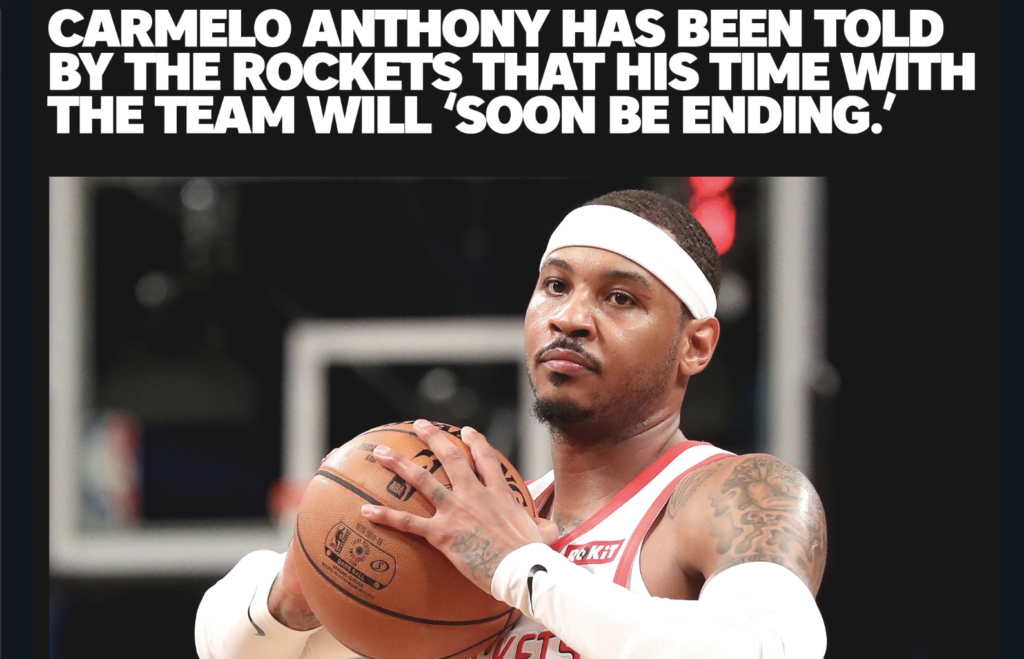 What The Hell is Going On With Carmelo?

Several players and members of the Rockets’ coaching staff believe that Carmelo Anthony has played his final game for the franchise, sources told ESPN on Sunday.

The organization has trod delicately on finalizing an exit for Anthony out of respect for his relationships within the team and his stature as a 10-time All-Star and future Hall of Famer.

Anthony, 34, has been away from the team for two games with what has been described as an “illness,” and he didn’t join the Rockets on their trip to Denver, sources said.

Despite general manager Daryl Morey decrying speculation about Anthony’s future as “unfair,” the Rockets could place Anthony on waivers as soon as Monday.

Anthony’s tenure with the Rockets is expected to end after he played in only 10 games, averaging 13.4 points and 5.4 rebounds while shooting 40.5 percent from the floor. He played primarily in a reserve role after starting every game in his previous 15 seasons. He ranks 19th in NBA history with 25,551 career points.

ESPN’s Adrian Wojnarowski reported during Houston’s loss to San Antonio on Saturday night that the Rockets and Anthony were in discussions about his role and how the franchise and veteran might be able to proceed together the rest of the season.

Those discussions happened in the wake of Anthony’s most recent game, a two-point performance on 1-of-11 shooting in a lopsided loss to Oklahoma City.

Morey, who held a rare pregame news conference to address the situation with the struggling veteran forward, tepidly said he expects Anthony to play again when healthy.

“One of the reasons I’m here, besides it’s 10 games in, about, is I think there’s just a lot of unfair-like rumors and everything going around about him,” Morey said before Houston’s 115-103 victory over the Indiana Pacers on Sunday. “He’s been great with us. As Coach [Mike D’Antoni] said yesterday, his approach has been great. He’s accepted every role Coach has given him — starting, off the bench, whatever it’s been.

“We’re struggling as a team, and it’s my job, it’s Coach’s job to figure this thing out. But from Guy 1 to Guy 15 — and I’ll put myself in there; a lot of this is on me right now — we’re not playing well. We’ve just got to figure it out. We’re evaluating everything.”

The Rockets signed Anthony to a one-year deal for the veterans minimum of $2.4 million after he received a buyout from the Atlanta Hawks. Houston hoped Anthony could help the Rockets, who came one win from the NBA Finals last season, contend for a championship again.

However, one source said both sides entered into the agreement “with eyes wide open,” understanding that the plug could be pulled if Anthony proved not to be a good fit. The Rockets have a net rating of 11.1 points per 100 possessions when Anthony isn’t on the floor, according to NBA.com stats.

“We’ve been extremely happy with his approach,” Morey said. “Every reason we’ve brought him here, he’s followed. Again, that’s why he’s here. It’s unfair that there’s all this speculation on just one player. I understand it, because he’s obviously a Hall of Famer, but it’s unfair.”

Anthony’s spot on the roster is likely to be filled by signing undrafted rookie Gary Clark, currently on a two-way contract, for the minimum. Clark has become a favorite of D’Antoni, earning the bulk of the minutes that were expected to go to Anthony.

“Gary Clark’s a player,” D’Antoni said after the Rockets outscored the Pacers by 16 in Clark’s 33 minutes Sunday. “He’s a player. Defense, rebounding, right position, shoots the ball. I mean, he’s a player.”

Rockets star James Harden said he didn’t have enough information to comment about Anthony’s situation, while Chris Paul, who along with Harden helped recruit Anthony over the summer, praised his longtime friend but was vague about Anthony’s future with the Rockets.

“Melo’s been great here,” Paul said. “That’s like a brother to me, know what I mean? I don’t know what’s being said or whatnot, but Melo’s been great, working hard every day. So we’ll see what happens.”

Asked if he expected Anthony to help get the 5-7 Rockets going in the right direction, Paul said, “Man, Melo’s a future Hall of Famer, know what I mean? That’s me saying that and knowing that. Like I said, we’ll see what happens.”