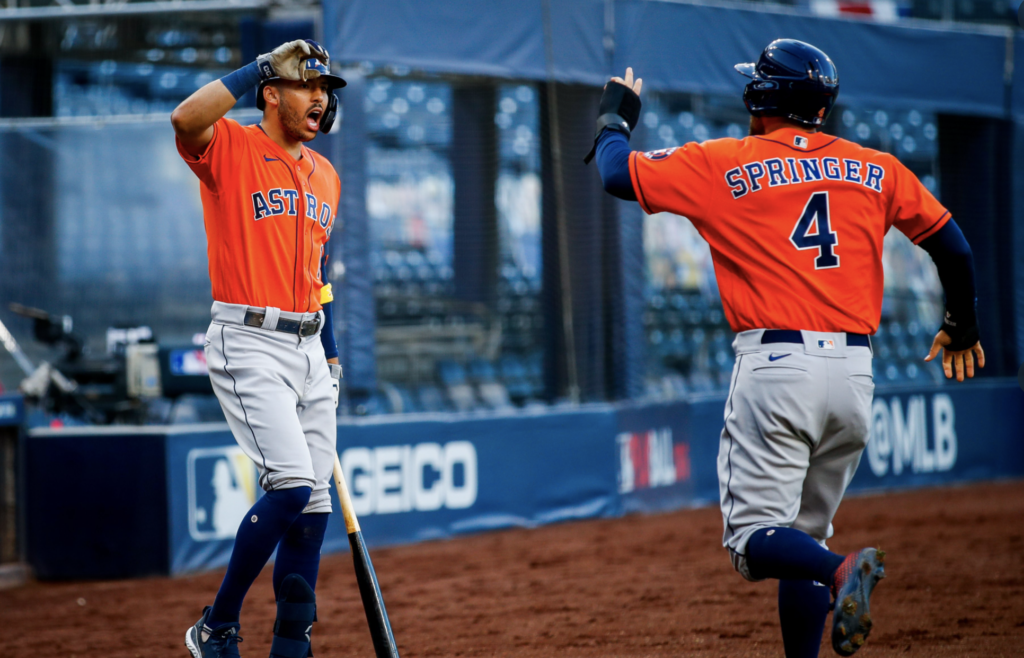 The Astros Refuse To Go Away!

The Houston Astros, baseball’s villains of 2020, the team 29 other fanbases are rooting against, the team whose demise is anticipated around the country, just refuse to die.

Down 3-0 in their ALCS with the Tampa Bay Rays just three days ago, the Astros have clawed their way back to tie the series with a 7-4 win in Game 6 on Friday night. Game 7, here we come.

It’s now one game with the AL pennant and a ticket to the World Series on the line. Now the Astros, after a thorough beating of the Rays in Game 6, have plenty of momentum heading into a situation they’ve been in before — a winner-take-all postseason game.

The Astros are now just the second team to advance to a Game 7 after falling behind 3-0 in the series, the other being the famed 2004 Boston Red Sox, who won that game and the ensuing World Series.

Jose Altuve, the goat in Games 2 and 3, is now hitting like an MVP again. George Springer is as dangerous as ever in October. And starting pitcher Framber Valdez was good enough across six innings that you almost didn’t remember that the Astros are without ace Justin Verlander. Valdez allowed just three hits, one run and struck out nine.

The Rays, meanwhile, have seen everything that helped them win the first three games of this series vanish in recent days. Their potent bullpen looked beatable. Randy Arozarena was hitless. Even the defense that was seemingly everywhere early in this series was scrambling to track down hit after hit from the Astros.

The Rays actually scored first — pushing through a run in the second inning on a Willy Adames double — but after that, it was all Astros.

The fifth inning was when this game was won. Rays manager Kevin Cash took out starter Blake Snell after giving up a walk and a single. Snell was upset since he still hadn’t let across any runs. It proved to be a bad move by Cash. Diego Castillo, usually a sure-thing reliever for Tampa Bay, gave up a single to George Springer that brought home two runs. Altuve doubled to bring home another. After Michael Brantley walked, Carlos Correa singled home another run.

You could feel the momentum shift right then and there. Houston scored another in the sixth inning, two more in the seventh to make it 7-1, making the game feel out of reach for Tampa.

Manny Margot tried to jumpstart the Rays. He hit a solo homer in the seventh, then a two-run shot in the eighth to make it 7-4. It wasn’t enough for the Rays to come back, but they did manage to get Astros closer Ryan Pressly into the game for the ninth inning, which could benefit them in Game 7.