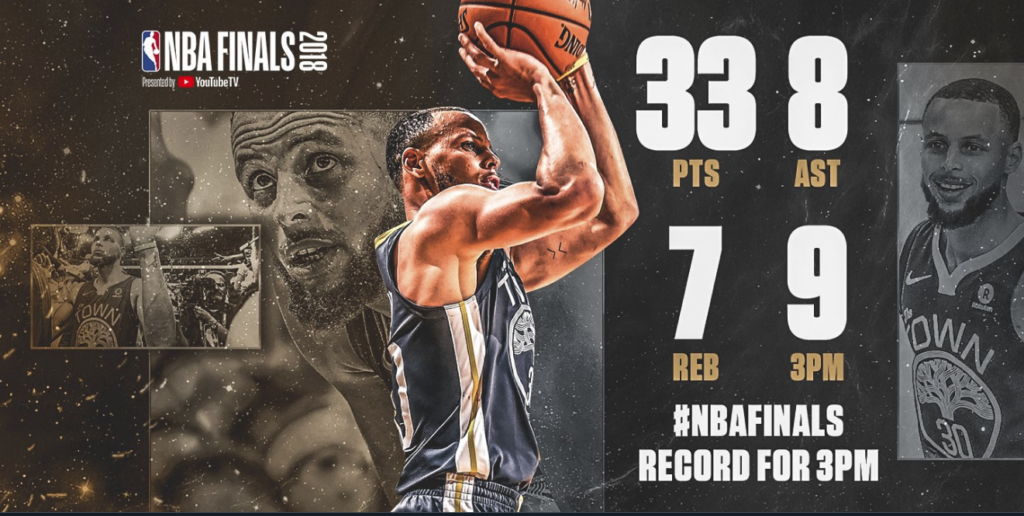 Stephen Curry backpedaled in pure joy. He skipped, hollered and let the ball fly from everywhere with that feeling he gets when there’s no way it will miss – unwavering even with a defender’s hand in his face.

Curry dazzled in outdueling LeBron James as the two superstars traded big shots and celebratory moves, hitting an NBA Finals-record nine 3-pointers and scoring 33 points to lead the Golden State Warriors to a 122-103 victory over the Cleveland Cavaliers on Sunday night for 2-0 lead.

Kevin Durant found his steady stroke to score 26 points to go with nine rebounds and seven assists while also handling a load of the defensive assignment against James. Klay Thompson added 20 points playing on a tender left leg to put the defending champions two wins from a repeat title they have talked about since the season began last fall.

James followed up his 51-point performance in Game 1 with 29 points, 13 assists and nine rebounds in a far tamer finals sequel – and a much more lopsided one – minus the utter craziness of a drama-packed opener three days prior.

Game 3 is Wednesday night in Cleveland.

”We want to continue to be uncomfortable,” James said. ”Just because we’re going home doesn’t mean we can relax.”

Kevin Love had 22 points and 10 boards for the cold-shooting Cavs, who will now try to gain some momentum back home.

Curry had the shot of the night with 7:54 to play, making an off-balance swish from several feet behind the 3-point arc over Love as the shot clock wound down, then scooted backward in delight. Curry fell into the first row of fans with a baseline 3 again over Love and four-point play at the 5:44 mark of the fourth.

The long shot over Love stood out to Curry’s Splash Brother, Thompson.

”About seven seconds on the clock he just kept going backward, I don’t know why, but he just threw it up and I didn’t think it had any chance of going in,” Thompson said. ”That was kind of like a dagger shot. It just gave us all the momentum back.”

James pointed with both hands after his 3 with 11:04 remaining got his team within seven, before Curry answered from deep the next two trips down the floor.

”Those moments when you can come down and answer and keep the momentum on our side, it’s big,” Curry said. ”Keep the crowd into it.”

Curry and James had a tense moment in the third, too.

James became irate at the officials for a no-call on Curry, who ran beneath the Cavs star and didn’t let him land with 3:54 remaining in the quarter as James caught Love’s long pass and went out of bounds. Cavs coach Tyronn Lue was hit with a technical, saying afterward he didn’t say much but was on the court.

JaVale McGee scored 12 points, making all six of his shots in his first career NBA Finals start as Kerr made a lineup switch that proved spot on.

Last year’s NBA Finals MVP made his initial five field goals Sunday, driving right at James on offense and doing all he could to fluster him on defense.

James hit a 3 over Durant’s outstretched arm midway through the third, then Tristan Thompson’s basket the next possession pulled the Cavs within 72-66. But they couldn’t contain Curry and the rest of the Warriors for extended stretches.

The Warriors vowed to make it harder for James to generate good looks after he shot 19 for 32 in the series opener, and James went 12:06 of game time between made baskets.

James went 10 for 20, showing few signs his shot was altered by a bloodshot left eye. He had been taking antibiotics and using drops after being poked in the eye by Green in the first half Thursday.

The Warriors earned a wacky 124-114 overtime win in Game 1 Thursday night – featuring J.R. Smith’s blunder when he grabbed an offensive rebound in the waning moments of regulation and dribbled back toward halfcourt rather than shooting for the victory, and an overturned charge call against James.

Smith received rousing cheers from the home fans during pregame introductions and ”M-V-P!” chants greeted him when he went to the foul line.

Thompson played after bruising his lower left leg when Smith slid into him in the first quarter Thursday. The Warriors All-Star has never missed a postseason game.

McGee scored the first four points as Golden State made its initial seven shots and 10 of 11.

Another key role player, Shaun Livingston, made his five field-goal tries for 10 points to give Golden State a lift in the first half after making all four of his shots Thursday.

”They’re a dangerous ball club no matter what,” James said. ”It starts with those four guys, those four All-Stars. Everybody else just does their job and they don’t miss a beat when they put someone in or they take someone out.”