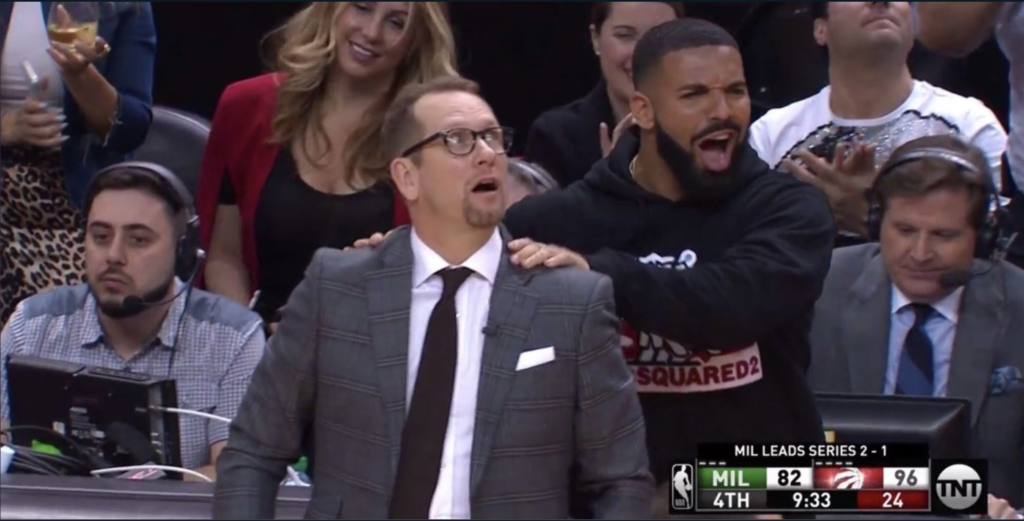 Drake, Kawhi and All of Toronto Are Headed To The NBA Finals

Down by as many as 15 points in the second half, the Toronto Raptors needed a late surge if they wanted to complete the four-game comeback and seal their first trip to the NBA Finals. Behind a monstrous third quarter from Kawhi Leonard and an all-around team effort in the fourth, the Raptors took down the Milwaukee Bucks, 100-94, to book a trip to the Finals.

“Just one possession at a time,” Leonard said in his postgame interview. “We kept fighting all game. We were down 10 points. We thought calls weren’t going our way, but we just kept striving and striving.”

Entering the third quarter, the Bucks led 50-43 before jumping to a 76-61 lead with 2 minutes left in the frame. The Raptors turned a 15-point deficit into a 17-2 run to eventually tie the game early in the fourth quarter.

From there, it was all Raptors as the team continued to make shots and control the ball against the Bucks.

“We were able to make it really difficult for them,” Norman Powell said. “We were really tight on that defensive end which gave our offense life because we were able to get on the transition.”

The Bucks trimmed the lead to two points late, but a clutch 3-point shot by Leonard with 3 minutes to play and some key rebounds down the stretch helped ice the game and seal the victory for Toronto.

Leonard finished the night with 27 points, 17 rebounds and 7 assists in the win. Kyle Lowry added 17 points, 5 rebounds and 8 assists.

For the Bucks, Giannis Antetokounmpo added a 21 point, 11 rebound double-double in the loss. Antetokounmpo continued his string of poor free throw performances of late by going 5-of-10 at the line.

Antetokounmpo played 41 minutes, which was as much as Bucks head coach Mike Budenholzer was willing to play him.

“I don’t think Giannis playing 44 minutes is the solution,” Budenholzer said. “If we can’t win with Giannis at 40-40-and-a-half, then Toronto deserves it. At some point he’s got to take a break.”

Still, Budenholzer remained steadfast in his appreciation for his team, which finished with a league-best 60 wins in the regular season.

“We feel like we’re just getting started,” Budenholzer said. “This is the beginning of our journey.”

The Raptors will now take on the Golden State Warriors in the NBA Finals. The game will mark Toronto’s first trip to a championship, while the Warriors will make their fifth-straight appearance.

Leonard will be making his first trip back to the Finals since 2014 when he was still a member of the San Antonio Spurs.

“I worked so hard to get to this point with the season I had last year,” Leonard said, reflecting on his return. “All that hard work put together and now we’re here. It’s exciting.

Toronto and Golden State will play Game 1 of the Finals on Thursday at 9 p.m. ET in Toronto.