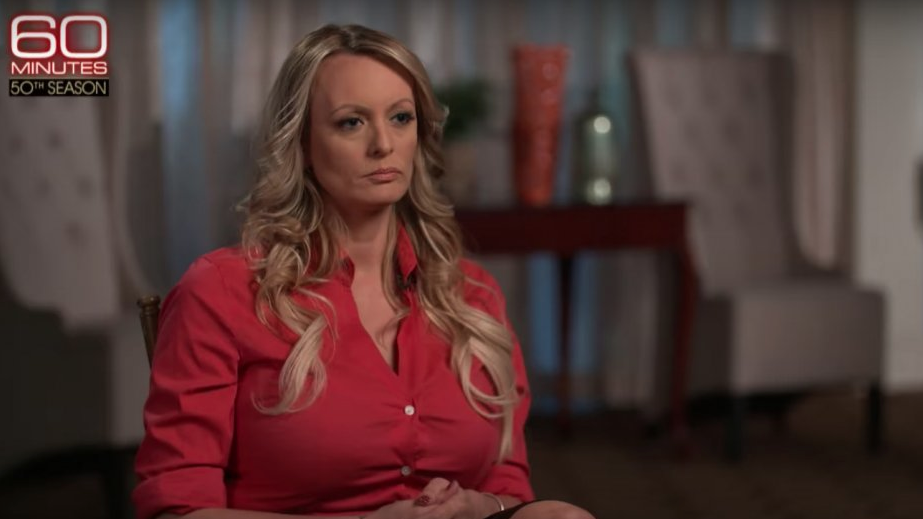 Get Yo Umbrella Mr Trump Cause Stormy Aint Going Away

Adult film actress Stormy Daniels said she agreed to accept what she called an “extremely low” payout of $130,000 days before the 2016 presidential election to remain silent about her alleged affair with Donald Trump because she had been threatened years earlier and still feared for her safety.

In her highly anticipated Sunday night interview with 60 Minutes, Daniels said she had been threatened in 2011, a few weeks after she agreed to tell the story of her alleged tryst to In Touch Weekly magazine.

“I was in a parking lot, going to a fitness class with my infant daughter. Taking, you know, the seats facing backwards in the backseat, diaper bag, you know, gettin’ all the stuff out,” Daniels said on the CBS program. “And a guy walked up on me and said to me, ‘Leave Trump alone. Forget the story.’

“And then he leaned around and looked at my daughter and said, ‘That’s a beautiful little girl. It’d be a shame if something happened to her mom.’ And then he was gone.”

Daniels said she never saw the unidentified man again and did not file a police report, but she said that threat and lingering concerns about the effect of the alleged tryst on her growing daughter propelled her to take the payout from Trump’s attorney Michael Cohen 11 days before the 2016 presidential election.

Daniels, whose legal name is Stephanie Clifford, said she was tempted to accept “large amounts” of money for her story in the final weeks of the presidential campaign, as the Trump team faced a barrage of allegations about the then-New York businessman’s treatment of women.

Daniels said the decision to accept $130,000 for her silence is proof that she was operating on fear, rather than opportunism.

“The fact that I didn’t even negotiate, I just quickly said ‘yes’ to this very, you know, strict contract — and what most people will agree with me extremely low number,” she said. “It’s all the proof I need.”

Daniels’ interview caps two weeks of intense publicity by her lawyer Michael Avenatti as they battle with President Trump and his legal team over the confidentiality agreement.

Asked by 60 Minutes’ Anderson Cooper why she’s choosing to break her silence now, Daniels said she wants to defend herself.

“I’m not OK with being made out to be a liar, or people thinking that I did this for money and people are like, ‘Oh, you’re an opportunist.  You’re taking advantage of this,’” she said. “Yes, I’m getting more job offers now, but tell me one person who would turn down a job offer making more than they’ve been making, doing the same thing that they’ve always done?”

Trump and his legal team have denied the affair, even as they are engaged in a fight to force a lawsuit Daniels filed this month back into private legal arbitration and out of public view. Cohen has said Daniels faces $20 million in damages for breaching the confidentiality agreement.

Daniels and her lawyer say the agreement isn’t valid, in part, because it was never signed by Trump.

Asked in Sunday’s interview what she would say to Trump if he’s watching the CBS program, Daniels said, “He knows I’m telling the truth.”

White House officials and Cohen did not immediately respond to requests for comment about the interview. Cohen has previously denied threatening her and has denied the payment to Daniels was related to the election.

Trump returned to the White House from his Florida resort, Mar-a-Lago, on Sunday evening before the interview aired. He ignored shouted questions from reporters about whether he planned to watch the interview.

The 2011 In Touch interview came years after the alleged affair with Trump began in 2006, and 60 Minutes, citing two former employees, said the magazine opted not to publish the interview at the time, after Cohen threatened to sue.

Daniels revisited some of those details in Sunday’s interview, describing playfully spanking Trump with a magazine that featured his picture on its cover.

Although Daniels and her lawyer described the relationship in their lawsuit as lasting well into 2007, she told 60 Minutes that she had a single sexual encounter with Trump.

She said Trump remained in contact with her after their meeting in Lake Tahoe, calling frequently and inviting her to events.They met again privately in 2007 at the Beverly Hills Hotel, Daniels said, but did not have sex.

Avenatti suggested Sunday on Twitter that more bombshells about the alleged tryst could drop after the interview airs.

“Not all of our evidence will be mentioned/displayed tonight – that would be foolish,” Avenatti tweeted on Sunday, adding that CBS is unlikely to air the full interview recorded two weeks ago. “Tonight is not the end,” Avenatti added. “It’s the beginning.”

In the CBS interview, Daniels declined to say whether she has text messages, photos or other evidence to back up her claims. “My attorney has recommended that I don’t discuss those things,” she said.

Trump, who routinely uses his Twitter account to blast his political enemies, has remained silent about Daniels, despite the daily headlines about the alleged tryst ever since Daniels filed a lawsuit earlier this month, seeking to invalidate what she calls her “hush” agreement with Cohen.

The 60 Minutes interview comes after former Playboy model Karen McDougal gave an interview to CNN, detailing her alleged 2006 affair with Trump. McDougal filed a lawsuit last week against American Media Inc., the company that owns the National Enquirer,which allegedly paid her $150,000 for rights to her story.