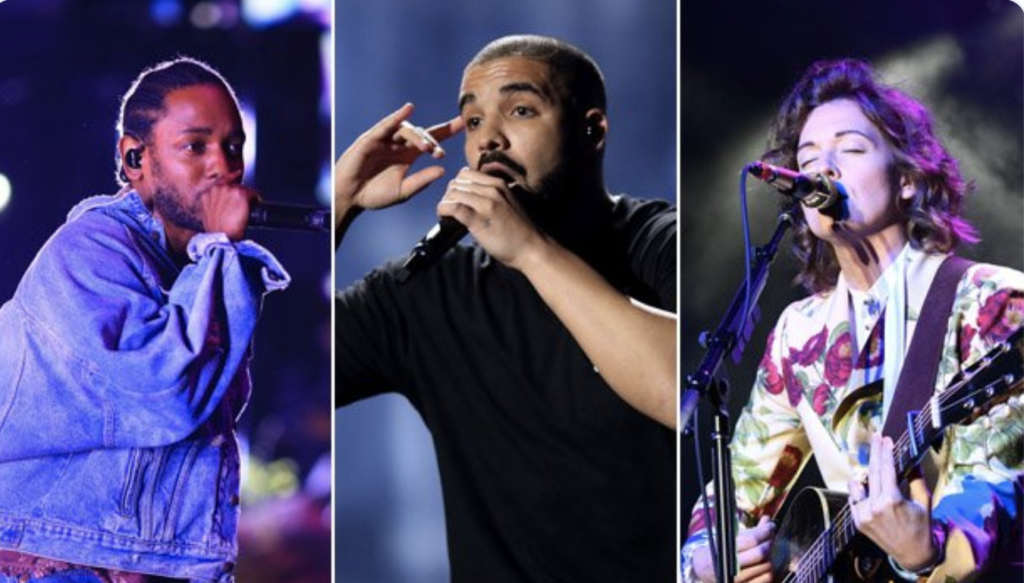 Kendrick Lamar, Drake, Brandi Carlile and hit producer Boi-1Da led the nominees list for the 2019 Grammy Awards, which were announced this morning. Lamar leads with 8, Drake follows with 7, and Carlile and Drake/Cardi B/Jay-Z & Beyonce producer Boi-1Da have six each. While three of those nominees are not surprising, singer-songwriter Carlile is a left-field leader: She has nominations in the Roots and Americana categories, but is also up for three of the big four categories (Best Album, and Song and Record of the Year).

Not far behind with five are Cardi B, Childish Gambino, Lady Gaga, Maren Morris, and surprise multi-nominee H.E.R., who is up for both Album of the Year and Best New Artist, along with several R&B nominations; Kendrick Lamar/”Black Panther” producer Sounwave and mastering engineer Mike Bozzi also have five nominations.

This is also the first year in which the Grammys have expanded the number of nominees in the main categories from five to eight. See the full list here.

The Recording Academy received heavy criticism in the wake of last year’s awards over a lack of diversity — much but not all of it justified — and it has responded with a list that is diverse both racially and in terms of gender. Looking at the four main categories, 5 out of 7 Album of the Year nominees are female artists (the 8th is the Lamar-helmed multi-artist “Black Panther” soundtrack); 6 of the 8 nominees for Best New Artist are female; 5 of the 8 nominees for Song of the Year are by female artists or co-billed with male artists; 5 of the 8 nominees for Record of the year have at least one female songwriter. And, as is blindingly obvious from the airplay and sales charts in recent years, hip-hop, R&B and pop are the dominant genres.

“Reflection, reevaluation, and implementation have been the driving forces at the Recording Academy over the past year,” said Neil Portnow, President/CEO of the Recording Academy, who will be stepping down from the post, which he has held since 2002, next year. “From convening our Task Force on Diversity & Inclusion and launching our new community-driven membership model, to increasing the number of nominees in the General Field, and to playing a leadership role in the successful passage of the landmark Music Modernization Act, the Recording Academy has reaffirmed its commitment to music creators across all facets of our industry. And, it’s our awards process that has taken a front seat during this evolutionary period to ensure the Grammy Awards reflect the ever-changing needs of the creative community. We are proud of this year’s nominations results and congratulate all of the talented and deserving nominees.”

Bill Freimuth, Chief Awards Officer of the Recording Academy, said, “Every year the Recording Academy voting membership has the biggest responsibility within our entire Grammy Awards process due to the fact they vote to determine who among their peers are the nominees. Once again, their votes have produced an impressive list of nominees across multiple genres, promising music fans a spectacular show filled with stellar performances and unique Grammy moments.”

The nominees were selected from more than 21,000 submissions across 84 categories for recordings released between Oct. 1, 2017–Sept. 30, 2018. According to the announcement, the Grammy are voted on by the Recording Academy’s membership body of music makers, who represent all genres and creative disciplines, including recording artists, songwriters, producers, mixers, and engineers.