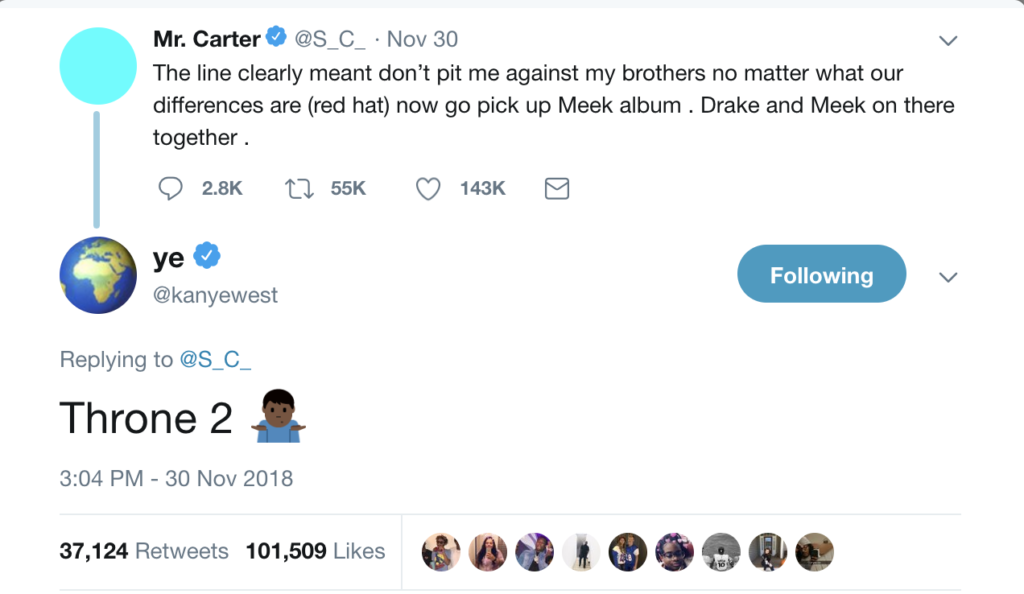 Have These Two Made Up?

After JAY-Z said his verse on Meek Mill’s “What’s Free” wasn’t a diss aimed at Kanye on Friday (Nov. 30), West responded to Hov’s tweet and suggested the two bury the hatchet in order to deliver the long-awaited sequel to Watch the Throne.

“Throne 2,” West wrote, using a shrug emoji to punctuate his point. West’s tweet comes after Jay reiterated that his lyrics on Meek’s “What’s Free” weren’t denouncing West and that he isn’t in the business of tearing down “his brothers.” “The line clearly meant don’t pit me against my brothers no matter what our differences are (red hat) now go pick up Meek album. Drake and Meek on there together,” Jay wrote.

West’s attempt to revive talks of Throne 2 comes after he teased the idea on Twitter in September. “Throne2 coming soon,” tweeted Ye. Hov never acknowledged West’s tweets and fans were left emptyhanded in regards to a possible reconciliation between the Throne tandem.

In an interview with The New York Times last year, Jay left the door open on possibly mending his relationship with West. “Kanye came into this business on my label. So I’ve always been like his big brother. And we’re both entertainers. It’s always been like a little underlying competition with your big brother…But it’s gonna, we gonna always be good,” he said in 2017. If Jay and Ye do come to a truce and decide to work on Watch the Throne 2, it would mark the duo’s first project together since their 2011 opus.