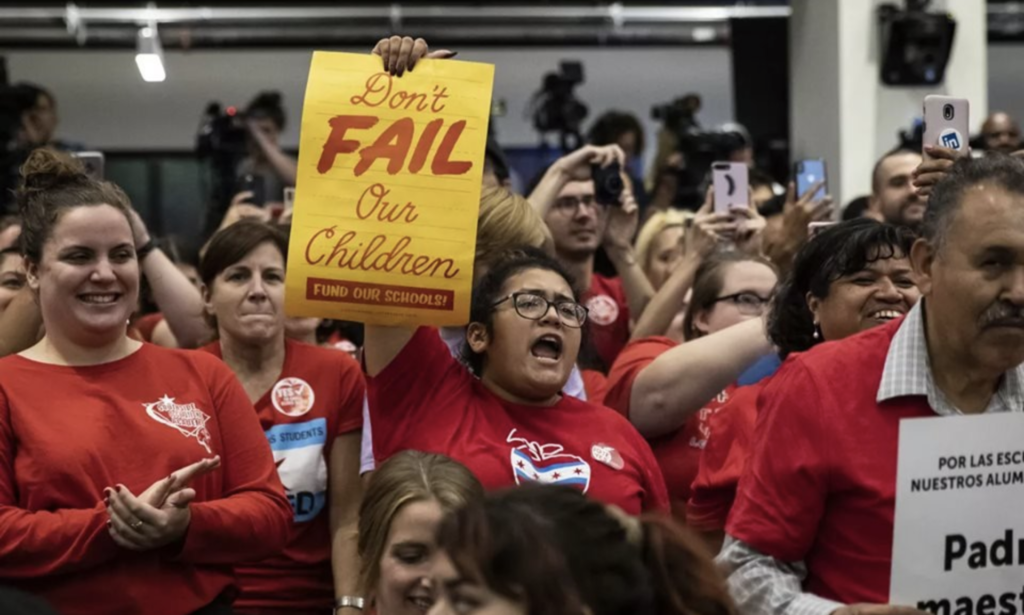 Chicago teachers went on strike Thursday, marching on picket lines after failing to reach a contract deal with the nation’s third-largest school district in a dispute that canceled classes for more than 300,000 students.

The strike came after the Chicago Teachers Union confirmed Wednesday night that its 25,000 members would not return to their classrooms. It follows months of negotiations between the union and Chicago Public Schools that failed to resolve disputes over pay and benefits, class size and teacher preparation time.

The strike is Chicago’s first major walkout by teachers since 2012 and city officials announced early Wednesday that all classes were canceled for Thursday in hopes of giving more planning time for parents.

Chicago Teachers Union President Jesse Sharkey said Wednesday night that the hope is for a “short strike with an agreement that will benefit our schools and our teachers.” He said Thursday morning while joining picketers outside Peirce elementary school that striking teachers have long been frustrated by their classroom sizes and crowded conditions they face while trying to teach.

“There’s a pent-up frustration among our membership about what conditions are like in our schools,” he said, noting that Peirce elementary doesn’t have a kindergarten class with fewer than 30 students.

Mayor Lori Lightfoot said she was disappointed by the union’s decision to strike.

“We are offering a historic package on the core issues — salary, staffing and class size,” she said Wednesday night at a news conference, adding that school district negotiators will remain at the bargaining table and that she hopes the union does, too.

During the 2012 strike, the district kept some schools open for half days during a seven-day walkout. District officials said this time they will keep all buildings open during school hours, staffed by principals and employees who usually work in administrative roles.

Breakfast and lunch will be served, but all after-school activities and school buses are suspended.

Janice Jackson, the district’s CEO, encouraged parents to send their children to the school that they normally attend, however they will be welcome in any district schools.

“We’ve put together a really comprehensive plan for the students,” Jackson said. “We will make sure they are safe and they have a productive day.”

Also striking will be 7,000 support staffers, whose union also failed to reach a contract agreement.

Before the strike announcement, June Davis said if teachers walked out, she would likely send her 7-year-old son, Joshua, to his usual elementary school — Smyth Elementary on the city’s South Side where almost all students are low-income and minority.

Davis, 38, said she would otherwise have to take her son to his grandmother’s in a southern suburb, requiring an hourlong trip on a regional bus line.

“Everybody’s hoping they will come to some kind of agreement, find some compromise,” Davis said.