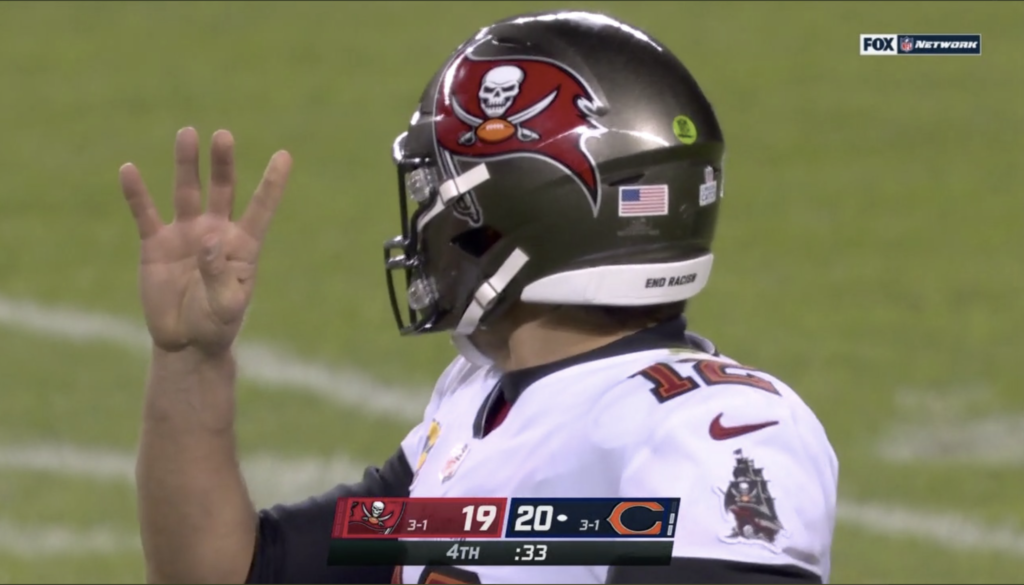 Tom Brady held up four fingers as if he had one more play remaining, one more opportunity to pull out the win. If that’s what he was thinking, the three-time MVP would not say.

Brady fell to Nick Foles again, appeared to lose count of downs on his final play with seconds remaining, and the Chicago Bears beat the Tampa Bay Buccaneers 20-19 on Thursday night after Cairo Santos kicked a 38-yard field goal with 1:17 remaining.

DeAndre Houston-Carson broke up Brady’s fourth-down pass with 33 seconds left after Santos kicked the go-ahead field goal. Brady put up four fingers, as if he had one more down. Instead, Chicago took possession and came away with a narrow victory.

“I know we needed a chunk and I was thinking about more yardage and it was bad execution,” Brady said. “I had a great opportunity there. Just didn’t execute when we needed to.”

Brady never lost to Chicago in five meetings as a member of the Patriots. But facing Foles for the first time since New England lost to Philadelphia in Super Bowl 52, the six-time champion once again came up short.

Brady threw for 253 yards and one touchdown. But the Buccaneers (3-2) had their three-game win streak snapped.

“It was a fistfight,” said Foles, acquired from Jacksonville in an offseason trade. “It reminded me of like, a good old fistfight from Philly. Now, I get to do it in Chicago. I really enjoyed getting in the locker room and celebrating with my teammates. I’m probably a little more tired than I thought I’d be just because of everything, but I’ll sleep well tonight. I think everyone is really excited about the victory.”

Khalil Mack had two sacks, and the Bears (4-1) bounced back from a lackluster loss to Indianapolis.

Foles, the Super Bowl 52 MVP, completed 30 of 42 passes for 243 yards and a touchdown in his second start after replacing Mitchell Trubisky.

“All in all, the offense made plays when they had to and I think that’s one of the special traits that I think Nick has,” coach Matt Nagy said.

Brady was 25 of 41. The three-time MVP was seen screaming on the sideline late in the third quarter after an ugly drive for Tampa Bay.

“He was just telling the guys we need to wake up,” running back Ronald Jones said. “Again, shooting ourselves in the foot. No way we should’ve lost that game.

Mike Evans had a touchdown reception.

Ryan Succop kicked four field goals, including a 25-yarder to give Tampa Bay a 19-17 lead with 4:49 remaining. But nose tackle Vita Vea was taken from the field on a cart with less than two minutes remaining after a teammate rolled up on his right leg.

The Buccaneers also committed 11 penalties for 109 yards in losing for the first time since the opener at New Orleans.

“I think turnovers, penalties, field position all those lead to points and it comes down to third down, red area, ultimately, you are trying to score more points than the other team and turnovers are a big part of it and penalties are another big part of that because you are not possessing the football if you are third and long yardage,” Brady said. “You need to have clean games where you stay ahead on down and distance.”