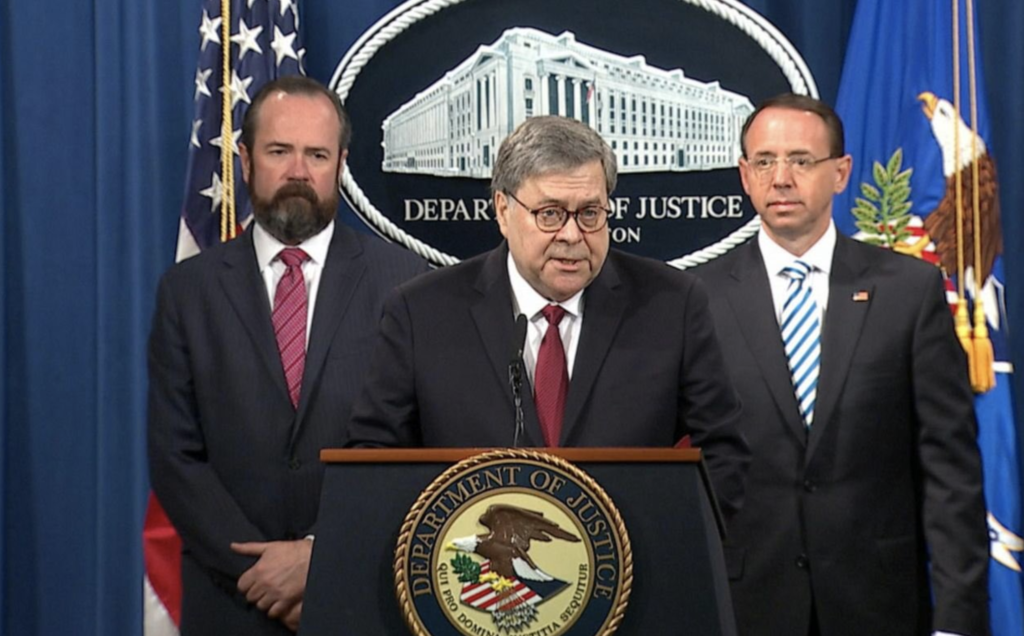 Details of Special Counsel Robert Mueller’s investigation into Russia’s role in the 2016 U.S. election were released on Thursday, showing a series of incidents in which President Donald Trump took actions to impede the probe that raised questions of whether he committed the crime of obstruction of justice.

Release of a long-awaited report by Mueller was a watershed moment in Trump’s tumultuous presidency. Ahead of its release, Attorney General William Barr – whose Department of Justice oversaw the investigation – delivered a spirited defense of the Republican president and his actions, infuriating Democrats.

Mueller did not make a conclusion on whether Trump had committed obstruction of justice, but did not exonerate him either.

Barr subsequently concluded that Trump had not broken the law, but told a news conference that Mueller had detailed “10 episodes involving the president and discusses potential legal theories for connecting these actions to elements of an obstruction offense.”

In June 2017, Trump directed White House counsel Don McGahn to tell the then-acting attorney general that Mueller had conflicts of interest and must be removed, the report said.

It also said there was “substantial evidence” that Trump fired James Comey as FBI director in 2017 due to his “unwillingness to publicly state that the president was not personally under investigation.”

Mueller cited “some evidence” suggesting Trump knew about former national security adviser Michael Flynn’s controversial calls with the Russian ambassador before Trump took office, but evidence was “inconclusive” and could not be used to establish intent to obstruct.

Before the report’s release, Barr gave a news conference at the Justice Department as he sought to shape the narrative on the document’s findings.

One of a handful of people to have seen the report before its release, Barr emphasized, as he had said last month, that Mueller did not conclude there was collusion between Trump’s campaign and Moscow.

“President Trump faced an unprecedented situation. As he entered into office and sought to perform his responsibilities as president, federal agents and prosecutors were scrutinizing his conduct before and after taking office and the conduct of some of his associates,” Barr said.

“At the same time, there was relentless speculation in the news media about the president’s personal culpability. Yet, as he said from the beginning, there was in fact no collusion,” added Barr. Shortly after, he sent the report to Congress.

The report said Mueller’s team did not issue a subpoena to force Trump to give an interview to the special counsel because it would have created a “substantial delay” at a late stage in the investigation.

It said Mueller accepted the longstanding Justice Department view that a sitting president cannot be indicted on criminal charges.