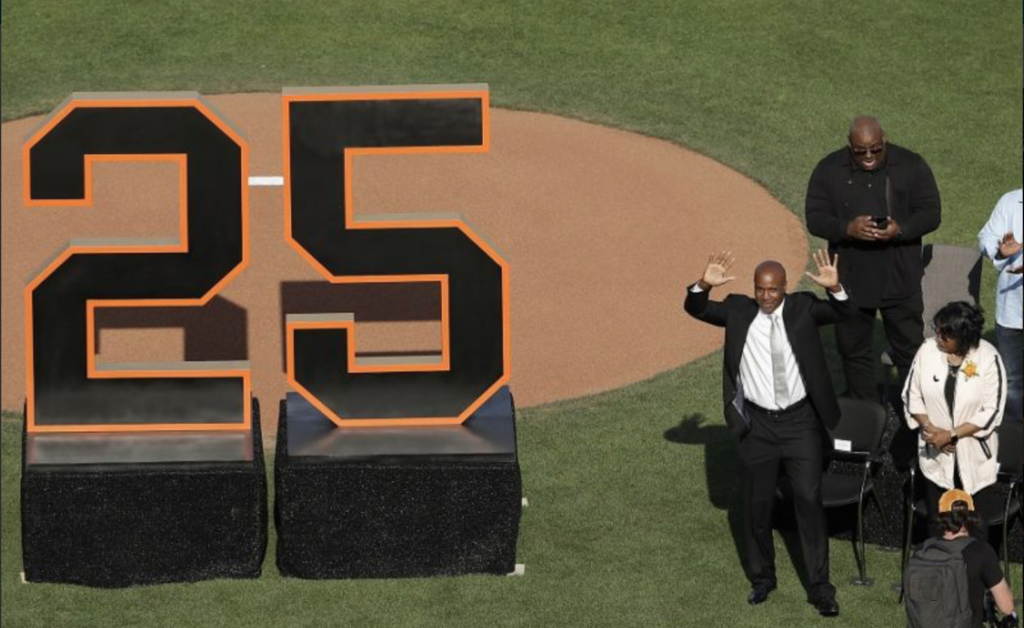 It’s Time To Vote Barry Bonds Into Hall of Fame

The Giants retired the all-time home run leader’s jersey number in a ceremony preceding the Giants-Pirates game at AT&T Park. Many people believe that the bayside ballyard never would have been built without the influence of Bonds, whose arrival as a free agent before the 1993 season revitalized the franchise and led to its escape from dilapidated, chilly Candlestick Park.

“I built this ballpark,” Bonds said in an impromtu exchange with reporters. “When I walk in this ballpark, I know whose house it is.”

And while the majority of fans associate No. 25 with Bonds, the seven-time National League Most Valuable Player, the man himself might always consider it as his father’s proud property, since that’s the number Bobby Bonds wore as a Giant from 1968-74.

“When I look up there,” Bonds said, referring to the left-field upper-deck facade where the numbers are displayed, “it still seems like Bonds — my dad — and Willie [Mays, No. 24]. It’s going to take me a minute to think of Barry and Willie with my father.”

During the festivities, Mays again assumed the dominant role that he grew familiar with as a player to endorse his godson for the Hall of Fame.

At 87, Mays rarely undertakes public speaking. But he insisted on leaving the comfort of his seat — “I’m going to go to the podium because when I say something, I want everybody to hear,” Mays said — to stump for Bonds’ election to Cooperstown.

“On behalf of all the people in San Francisco and all over the country, vote this guy in,” Mays said. Bonds’ vote total has grown each year since his second appearance on the ballot, but with four chances remaining to gain election from the Baseball Writers’ Association of America, Bonds still needs a significant increase in support to reach Cooperstown. He garnered 56.4 percent of the vote on the most recent ballot, well short of the 75 percent necessary for induction.

With the retirement of his number, reaching the Hall of Fame is indeed the only baseball achievement that has eluded Bonds, 54, who possesses countless records.

“The love of the game is what drove me every day,” Bonds said.

During his speech to a mostly full house at AT&T Park, Bonds attributed his drive to excel to his father, Bobby, himself a wondrously talented Major League outfielder from 1968-81.

Bonds noted that his father rarely praised him unconditionally. In one of the ceremony’s more poignant moments, Bonds related that he asked his father before he died in 2003 at age 57, “Why, Daddy? Why were you so hard on me?” The answer came in the form of the tireless work ethic that the younger Bonds developed.

As the Giants took the field to open the game, Bonds jogged to left field, where “25” was mowed into the grass, and threw a ceremonial first relay to San Francisco left fielder Alen Hanson. Bonds occupied that position for 15 years with the Giants after manning it for seven years with Pittsburgh.