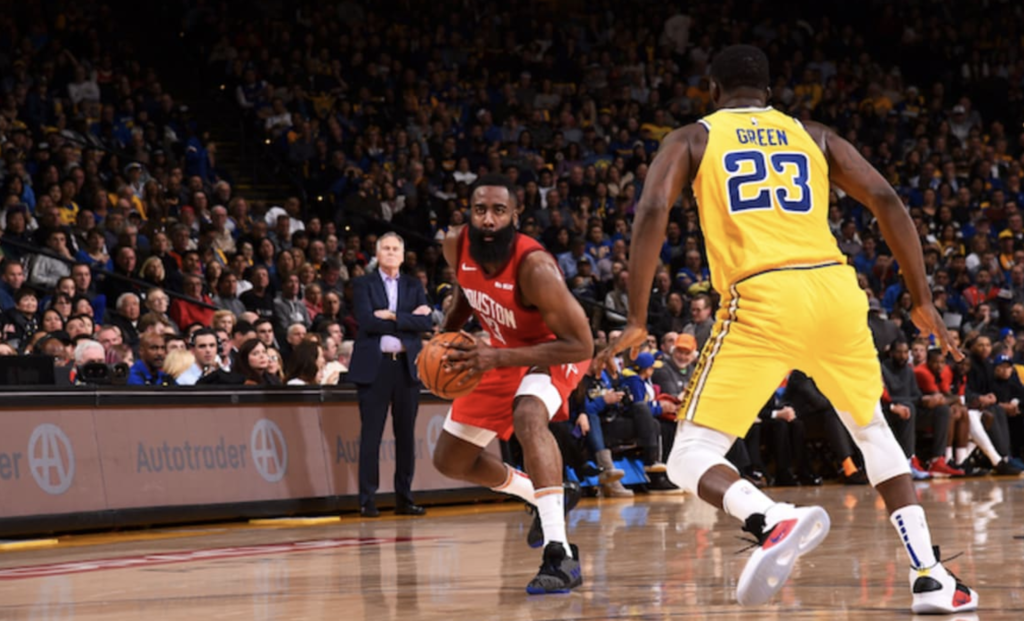 James Harden had words for Draymond right after the game-winner 😤 pic.twitter.com/iKG0noKK5N

James Harden Is A BEAST

James Harden capped his second consecutive triple-double by sinking a 25-foot 3-pointer with one second remaining in overtime Thursday night, giving the Houston Rockets a 135-134 victory over the Golden State Warriors in Oakland, Calif.

After Stephen Curry put Golden State up by two with an 18-footer with 23.1 seconds to go, the Rockets got possession after a kicked-ball violation on the Warriors with 5.5 seconds left.

The ball was inbounded to Harden, who was able to get off — and make — a heavily contested 3-pointer to provide the game-winning points and cap a game-high, 44-point night.

Kevin Durant’s desperation 40-footer caromed off the rim at the buzzer, allowing the Rockets to win their sixth straight and 11th in their past 12.

In scoring 40 or more points for the fifth consecutive game, Harden also found time for 10 rebounds and a game-high 15 assists for his fifth triple-double of the season. He turned the ball over seven times.

Curry led the Warriors with 35 points.

The Rockets forced the extra session by scoring the last six points of the fourth quarter on a three-point play by Clint Capela with 1:03 to go and a 3-pointer by Harden with 51.4 seconds left.

After Durant misfired for Golden State, Harden had the last shot of regulation but couldn’t connect from 32 feet, sending the game into overtime tied at 119-all.

Thirty of Harden’s points came on 10 3-pointers as the Rockets went 21-for-54 from beyond the arc and outscored Golden State 63-42 on threes.

Capela recorded a 29-point, 21-point double-double for Houston, which beat Golden State for the second time this season after falling to the eventual champion Warriors in seven games in last year’s Western Conference finals.

Austin Rivers added 18 points, Danuel House Jr. 17 and Gerald Green 16 as the Rockets rallied from as much as a 20-point, third-quarter deficit.

Curry managed his 35 points despite just 5-for-15 shooting from 3-point range. The Warriors were 14-for-37 from long distance as a team.

Durant and Klay Thompson finished with 26 points apiece for the Warriors, while Draymond Green flirted with a triple-double of his own with nine points, 11 rebounds and eight assists.

The loss was Golden State’s third straight at home.