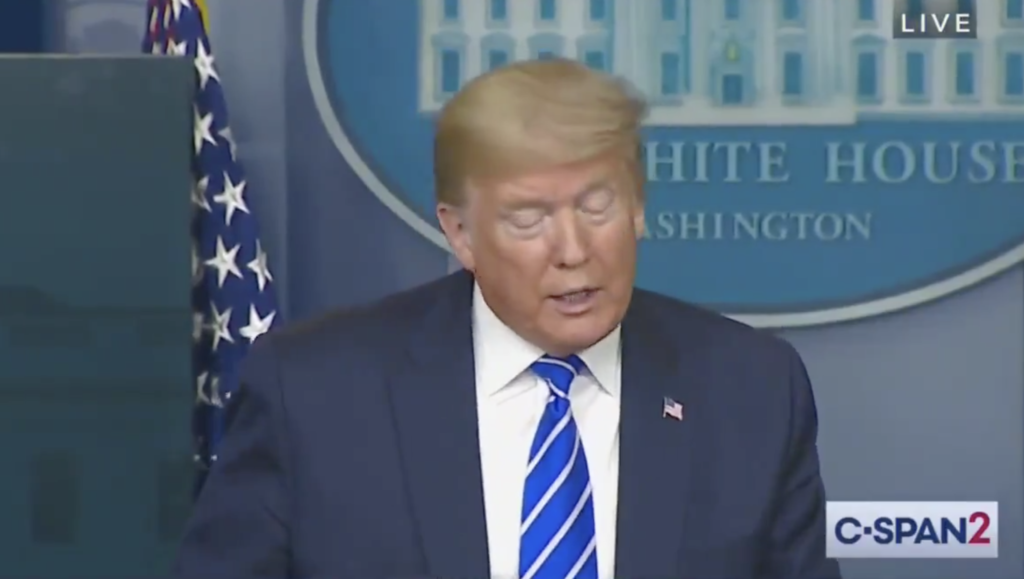 President Trump: “Suppose we hit the body with a tremendous light. That hasn't been checked...”

"The disinfectant, where it knocks it out in a minute, & is there a way we can do something like that by injection inside, or almost a cleaning. As you see it gets in the lungs" pic.twitter.com/IixdLZU7um

President Donald Trump suggested during his Thursday night press briefing that scientists investigate whether there’s a way to inject light, heat, or disinfectant into the human body to kill the coronavirus, despite lacking any evidence to support his theory.

“Suppose that we hit the body with a tremendous, whether it’s ultraviolet or just very powerful light,” Trump said from the White House podium. “Suppose you can bring the light inside the body, either through the skin or in some other way.”

The president said he asked William Bryan, a science and technology adviser at the Department of Homeland Security, to explore those possibilities and that Bryan said he would follow up. Bryan presented “emerging” results from recent federal government studies showing that sunlight, heat, and humidity can help kill the coronavirus.

Trump celebrated the data, which he claimed confirmed a “nice rumor” that the virus might fade during the summer months. Earlier this month a report sent to the White House and covered by The New York Times, suggested that there’s not enough evidence to say that the disease will dissipate in summer.

“Is there a way we can do something like that by injection inside or almost a cleaning?” Trump asked his experts at the briefing. “It sounds interesting to me, so we’ll see. But the whole concept of the light, the way it kills it in one minute. That’s pretty powerful.”

He brought up his unsubstantiated idea again, noting, “Maybe, it works. Maybe, it doesn’t.”

“I would like you to speak to the medical doctors to see if there’s any way you can apply light and heat to cure. You know? If you could,” Trump told Bryan and Dr. Deborah Birx, the federal government’s coronavirus response coordinator. “And maybe you can, maybe you can’t … I’m not a doctor.”

The president then asked Birx whether she’d “ever heard” of heat and light being used as a cure for a virus.

“Not as a treatment,” she responded.

“I think it’s a great thing to look at,” he concluded.