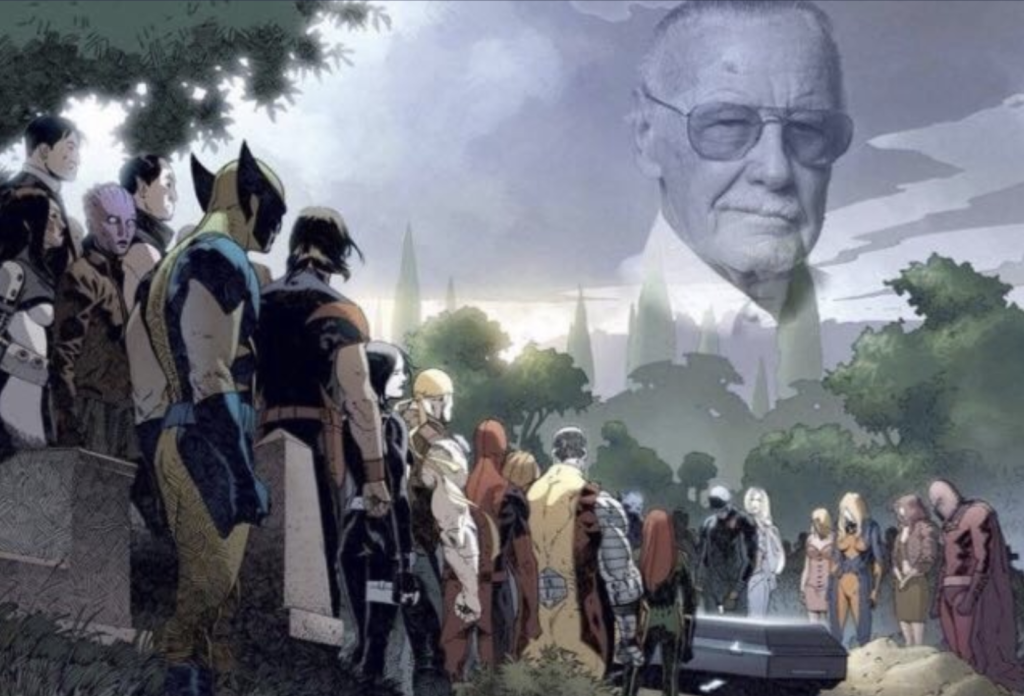 RIP to The Amazing Stan Lee

Stan Lee, who ushered in a comic book renaissance by co-creating the iconic superheroes Spider-Man, the Fantastic Four, and the X-Men — characters who made the leap to film with often-spectacular results — died on Monday, his daughter’s attorney confirmed to Variety. He was 95.

Lee was taken to Cedars Sinai Medical Center in Los Angeles on Monday after suffering a medical emergency, and was declared dead shortly afterwards.

Working primarily with artist Jack Kirby, Lee — writing as many as a half-dozen titles or more a month — transformed Marvel Comics into a powerhouse, featuring socially relevant stories that spoke to young readers in a way the form hadn’t previously. Those works, largely created during a wildly productive stretch in the early 1960s beginning with Fantastic Four, a squabbling and at times reluctant team of superheroes, were part of what came to be known as the Silver Age of comics.

The titles Lee authored included those featuring Spider-Man (with artist Steve Ditko), the Hulk, X-Men, Iron Man, Thor, Daredevil, Captain America, and the Avengers — all of which have been turned into major features.

Lee himself left Marvel — after one of several management changes — in 1972, but he retained the title chairman emeritus throughout his life. Although no longer directly involved with the company, Lee received producing credits — and appeared in cameos that invariably triggered knowing laughs from aficionados — in Marvel’s live-action efforts. He filmed cameos in movies including “Deadpool 2” and “Guardians of the Galaxy 2” far in advance of their release, in case he was indisposed. He also turned up playing himself in other venues, such as CBS’ geek-inspired comedy “The Big Bang Theory.”

A gifted salesman, Lee also became a premiere ambassador for the comic book industry, reaching out to college campuses through personal appearances and interviews. With his outsized personality, Lee remained much in demand and creatively active into his 90s, creating new concepts for animation and TV.

Born Stanley Lieber (and choosing his professional name by splitting his first name in half), Lee was raised by Jewish immigrant parents in New York City. His younger brother, Larry Lieber, became a comic book artist.

Through his uncle, the brother-in-law of comic book publisher Martin Goodman, Lee became an assistant at what was then known as Timely Comics, which eventually became Marvel.

Lee gradually began writing comic books under the pseudonym “Stan Lee,” he said in his autobiography, because he wanted to preserve his real name for more serious work, such as novels. (He later had his name legally changed.)

He earned his first credit for a Captain America story in 1941. When Kirby and editor Joe Simon left due to a dispute with Goodman, Lee, then a teenager, was named interim editor. As Lee told the story, “Martin looked around and said, ‘Hey, do you think you could hold down this job until I can get an adult?’”

Lee served in the U.S. Army during WWII. Afterward, he ran the publishing operation but wasn’t particularly happy with the results — churning out romance, monster stories, and anything else Goodman thought might sell.

Envying the success of DC Comics, which sported characters such as Batman and the Justice League, Goodman allowed Lee to try creating something in the superhero genre. Teaming with Kirby, Lee conjured up a new kind of hero — plagued with flaws, insecurities, even romantic problems. Many were outsiders in ways with which young readers could identify.

The immediate success of Fantastic Four spawned a torrent of new Marvel titles — so many that Lee was struggling to keep up the pace. As a consequence (and really out of necessity), he devised a new, more collaborative way of working with illustrators: Lee would plot out the stories, then let the artists draw them before adding dialogue and word balloons based on those images.

As it turned out, that approach worked especially well in capitalizing on Kirby’s storytelling skills. “He was really a film director doing comics,” Lee once said.

Lee also forged an unusual bond with Marvel’s readers, updating them on Marvel publications via editorials that he signed “Excelsior!” Lee later titled his autobiography “Excelsior: The Amazing Life of Stan Lee.”

Although Goodman had little respect for the comic book-reading audience, Marvel began attracting more sophisticated fans and elevated the level of dialogue in comics, which Lee explained by saying, “If a kid has to go to a dictionary, that’s not the worst thing that could happen.”

Despite their successful collaboration, Lee and Kirby’s relationship didn’t end amicably. Chafing at what he saw as his second-tier status at Marvel, with Lee running things and occupying the spotlight, Kirby bolted in 1970 and began working for rival DC. The split drove many Marvel fans into separate camps, with some loyal Kirby partisans bearing ill will toward Lee.

“A lot more people know the name Stan Lee than the name Jack Kirby,” Kirby’s daughter, Lisa, told the Los Angeles Times after her father’s death. “I’m not putting down Stan Lee’s talents, but it’s difficult for us to see that he does dominate the credit.”

As Dark Horse Comics founder Mike Richardson put it, “Lee and Kirby were the Lennon and McCartney of comics, and Stan Lee became a well-known figure in popular culture and Jack did not.”

In 1971, Lee also helped bring about the revision of the Comics Code Authority, a self-imposed guideline for comic book stories introduced amid criticism of the industry during the 1950s. Lee wrote a three-part story in which Spider-Man’s best friend, Harry, became addicted to drugs and published those issues without the CCA seal of approval.

Lee’s post-Marvel ventures weren’t a match for his earlier career. With lawyer Peter Paul, Lee launched his own company, Stan Lee Media, in 1998, but two years later investigators accused Paul of manipulating the stock. Paul fled to Brazil and was finally extradited back to the U.S., pleading guilty to violating SEC rules in 2003 (Lee was never implicated in any wrongdoing).

Lee later formed another shingle, Pow! Entertainment, listing himself as “creative giant” on his business cards. He continued to create TV, film, and game projects, including direct-to-DVD animated movies under the banner “Stan Lee Presents.”

Despite his continuing relationship with Marvel and strong association with the name, Lee sued the company in 2002, maintaining he had been promised a percentage of profits from TV and film productions. He received a reported $10 million settlement in 2005.

A subsequent lawsuit against Lee and the company filed by Stan Lee Media shareholders was dismissed in 2011, ending nearly a decade of litigation. The Kirby heirs also explored their legal options in connection with their father’s stake in Marvel characters he co-created, but a federal court nixed their appeal in August 2013.

Lee sold Pow! Entertainment to Hong Kong company Camsing International Holding in 2017. He filed a billion-dollar lawsuit against the company this past May, alleging that business partners took advantage of his dwindling eyesight and duped him into signing away the exclusive right to his name. He dropped the lawsuit in July.

It wasn’t the end of Lee’s legal turmoil, however. In August, a judge granted a restraining order to protect Lee from Keya Morgan, a memorabilia collector who had been accused of exploiting his close relationship with Lee to embezzle artwork, cash, and other assets worth more than $5 million.

For all Marvel’s success in print, Lee’s high profile, and the animated cartoons (and later live-action series) produced in the 1960s and ’70s, the Hollywood mainstreaming of Marvel didn’t begin in earnest until movies like the “X-Men” and Spider-Man franchises in the 2000s. Those films and advances in special effects spawned the current wave of comic book movies, which have become some of the industry’s biggest moneymakers.

Remarkably energetic even as an octogenarian and beyond, Lee was extremely popular in Hollywood in his later years among a generation of appreciative filmmakers who grew up reading comics and carried that passion for Marvel characters with them.

In 2011 Lee teamed with Ricco Capital Holdings, a Hong-Kong-based merger and acquisition boutique, and Panda Media Partners, a joint venture of Fidelis Entertainment, to create Magic Storm Entertainment to launch new superheroes in China and other Asian territories.

Lee’s many accolades included the National Medal of Arts in 2008. At the time, he told National Public Radio that he took very little credit for the popularity of Marvel properties in other media such as movies, saying, “It’s a monument to the fact that basically I guess those were fairly commercial stories.”

Lee received the Producers Guild of America’s Vanguard Award, aimed at recognizing achievements in new media and technology, in January 2012. A documentary, “With Great Power: The Stan Lee Story,” debuted at Comic-Con in 2010.

Lee’s friends included Batman creator Bob Kane, and Lee said in an interview that Kane had teased him about the success of the Warner Bros. movies, beginning with “Batman” in 1989. Lee joked that he regretted that Kane’s death in 1998 prevented him from seeing the theatrical ascent of the Marvel properties, which matched and, in the case of “Spider-Man,” temporarily surpassed his own.

Lee is survived by his two daughters. His wife of nearly 70 years, Joan, died last year of complications from a stroke.