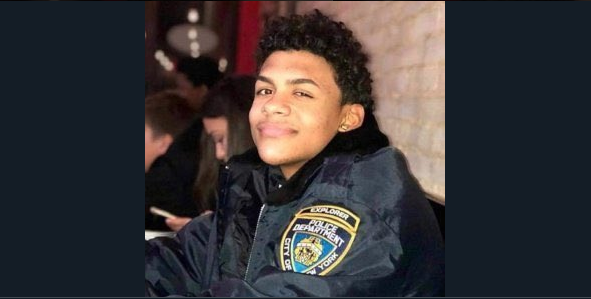 The Cowards Have Been Arrested #JusticeForJunior

Police took two suspects into custody in the Bronx and tracked down three more in Paterson, NJ, sources said.

Five members of the deadly Dominican gang Trinitarios allegedly hacked 15-year-old Lesandro Guzman-Feliz with knives and a machete outside a Bronx deli Wednesday night, leaving him on the sidewalk to die.

Investigators believe it was a case of mistaken identity, according to sources. The victim was enrolled in the NYPD Explorers youth program and dreamed of being an NYPD detective, according to his family.

Surveillance videos Friday showed the horrifying moment a teen was dragged by a group of thugs out of a Bronx bodega and repeatedly hacked at with a machete before he bled to death on the street — steps away from a hospital.

Lesandro Guzman-Feliz, 15, is seen being dragged by the hood of his shirt out of the Cruz and Chiky grocery on East 183rd Street and Bathgate Avenue in Belmont on Wednesday night.

One of the four attackers is then seen hacking at the shrieking teen with the large blade as another one punches him over and over before the group speeds off in two cars.

A bleeding-to-death Guzman-Feliz, who police said was stabbed multiple times, including what appeared to be a huge gash in the neck, was left screaming on the corner with his hands raised before running across the street.

In another video of the 11:40 p.m. incident, taken from out a window several stories above the violent scene, bystanders can be heard screaming, “Oh, s–t!” and “Stop!”

Police on Friday also released footage of the murderous thugs — who are still at-large — walking in and out of the bodega.

Another graphic video posted to Facebook shows Guzman-Feliz, who was a student at the Dr. Richard Izquierdo Health and Science Charter School, covered in blood from head to toe with his eyes wide open sitting on the sidewalk near St. Barnabas Hospital as people around him scream. “No, no!” one woman says as she appears to apply pressure to his neck.

“Oh, my gosh! My little brother!” another person calls out during the chaotic scene.

People can be heard telling the boy, who was referred to as “junior,” to “keep his eyes open” as they encouraged him to “keep talking.” Authorities say the victim had run into the bodega after being chased by the group.

Guzman-Feliz, who lived in the area with his family, ran toward nearby St. Barnabus Hospital before he died of his injuries just feet away, police said.

Cops say the victim, who had a clean record, knew the suspects.

A police source said that all of the suspects are part of a gang but that Guzman-Feliz was not.

The victim’s older sister Genesis Collado-Feliz, 17, told The Post that her brother was “a good student” and “a good kid” who enjoyed playing Nintendo.

“He tried to run into the store because he thought he’d be safe. They dragged him from the store like a dog,” Collado-Feliz had said. “He is not a criminal.”

The murder weapon has not been recovered.

World famous stripper-turned-rapper Cardi B shined a light on the brutal slaying.

She posted a picture of Guzman-Feliz in the hospital, telling her 25.9 million Instagram followers, “These Bronx streets are ruthless,” with a #justiceforjunior.

Collado-Feliz credited Cardi B for sparking donations to a GoFundMe titled “Justice for Junior.” Organizers had hoped to raise $15,000 for funeral expenses — and it had soared past $21,000 by Friday night.