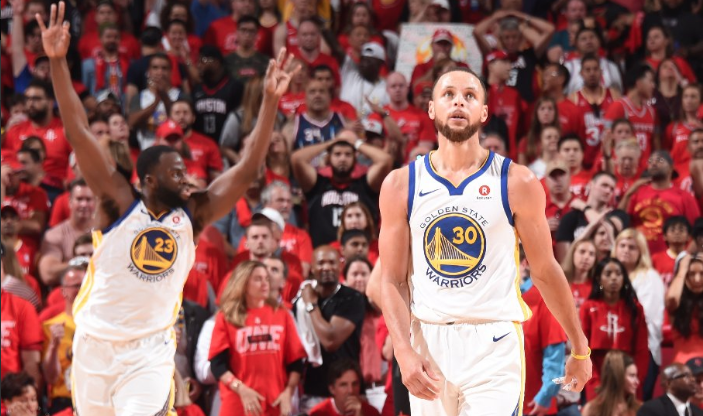 In the end, all the questions remain.

For Mike D’Antoni, for Chris Paul, James Harden and the rest of the Houston Rockets.

All of the demons of playoffs past that the were to be eradicated with one game, Game 7 of the Western Conference finals on their home floor against the reigning champion Golden State Warriors, and all of the noise would be silenced.

But it wasn’t to be. The team these Rockets were built to beat, would not be denied.

The Rockets’ record-setting season, the best regular season in franchise history, was undone by another record they ran into head on in what turned out to be the final night of their would-be magical campaign.

The Rockets shot a jaw-dropping 44 times from beyond the 3-point line, making just seven while enduring a cover-your-eyes stretch that saw them miss a staggering 27 straight.

The 37 misses from deep are a playoff record. They broke their own record of 36, which they set in the first round against Minnesota when they shot 16-for-52 in Game 2 against the Minnesota Timberwolves and won by 20 points.

You can go cold as ice from deep in a first-round series against an overmatched opponent and still win in a runaway. You can’t do it against the best shooting team in NBA history in a game with everything on the line.

And as the Rockets sputtered in the third quarter the Warriors heated up. A Kevin Durant 3-pointer tied the game at 61 with 4:34 to play in the third and a corner 3 from Curry with 36 seconds later gave the Warriors a 64-61 lead they’d never surrender.

“These guys, you think you’ve got them or you think you are guarding them okay, and it’s just, if you take a deep breath one time, it’s a 3,” D’Antoni said. “That’s why they’re so good.”

P.J. Tucker’s corner 3 late in the game was the Rockets’ only made basket from distance after halftime, an ugly 1-for-21 effort that precipitated their collapse from an earlier 15-point lead.

“Man, it hurts bad,” said veteran Rockets forward Trevor Ariza, who had perhaps the most brutal night of all, going scoreless on 0-for-12 shooting from the floor, including 0-for-9 from deep. “We played hard, though, we fought hard. I’m just hurt right now. Yeah, this one hurt real bad.”

Their early lead provided even more false security for a team that already had to work without Paul in Games 6and 7; that right hamstring strain suffered in the final minute of the Rockets’ Game 5 win ending his season prematurely.

The Rockets’ season-long focus on the Warriors provided the ultimate incentive, from Daryl Morey’s obsession with the four-time Western Conference champs as he put this Rockets team together last summer, until the final buzzer Monday night.

But now the after taste of being so close but just not quite healthy or good enough will linger into another offseason that begins before June.

The manner in which they lost cuts particularly deep for a team that bragged about its “swagger” all season, from opening night at Oracle Arena when they spoiled ring/banner night for the Warriors right up until their fall in Game 7, when the strength they’d relied on all season failed them.

D’Antoni praised his team after it was all over, refusing once again to measure them based solely on the results of this series and this postseason. He stayed true to his word before the playoffs began, insisting that what happens now would not define the careers of Harden or Paul.

It’s a noble thought, a fine gesture from an accomplished coach who helped revolutionize the game but is lacking that one breakthrough trip to basketball’s biggest stage: The Finals.

If that’s the way it looks and feels from the inside, fine. But externally, the results are all that matter.

And D’Antoni, Harden and Paul go into the offseason with the same whispers, the same doubters wondering about their readiness for the magnitude of these sorts of moments.

D’Antoni is still the great coach without a signature accomplishment. His team had a 3-2 edge in this series and home-court advantage in their back pocket, and couldn’t finish against a team that has mastered the style of play he introduced to the league during his days in Phoenix with a two-time Kia MVP running the show.

D’Antoni’s confidence, however, will not be shaken by yet another postseason failure.

“No, because the other team’s doing it,” he said. “No, not at all. That’s where the game’s going. Now we should have made some more (3s) but no, I don’t lose confidence in that. We’ve got the right formula. We’ve got to execute it. We’ve got to do a little bit better and it would be nice if they would help out a little bit, but it seems like they’re not. We’ll get better.”

Paul is still the all-time great point guard who can’t seem to stay healthy long enough to fulfill his destiny on a championship stage.

“We knew it was going to be tough on him,” D’Antoni said. “Mostly I hate it for him. He’s probably more devastated than anybody. But again, I know the fans of Houston, especially myself, to have him on your side is incredible. He’ll be back. Like I said, he’ll be even better. We’ll be better.”

Harden, the likely Kia MVP this season, is favored to join an unfortunate cast of players with the most valuable hardware but without a championship ring to go with it. After scoring 41 points in Game 1, his numbers continued to slide. He averaged 26.7 points on 38 percent shooting from the floor, including 20 from beyond the arc, over the final six games.

And since Paul was relegated to a sideline motivator role for the final two games, the burden Harden carries into the offseason for this latest setback is magnified.

But like his coach, Harden said there was no turning back. Even with a record blizzard of 3-point misses, there was never so much as a passing thought to change up and try something different.

“I mean, we had a lot of open shots,” Harden said, confident to the bitter end. “I think we competed , and competed the best we can.”

The Rockets’ best would have been good enough to beat anyone else in the NBA Monday night.

Just not the one team they were supposed to built for.