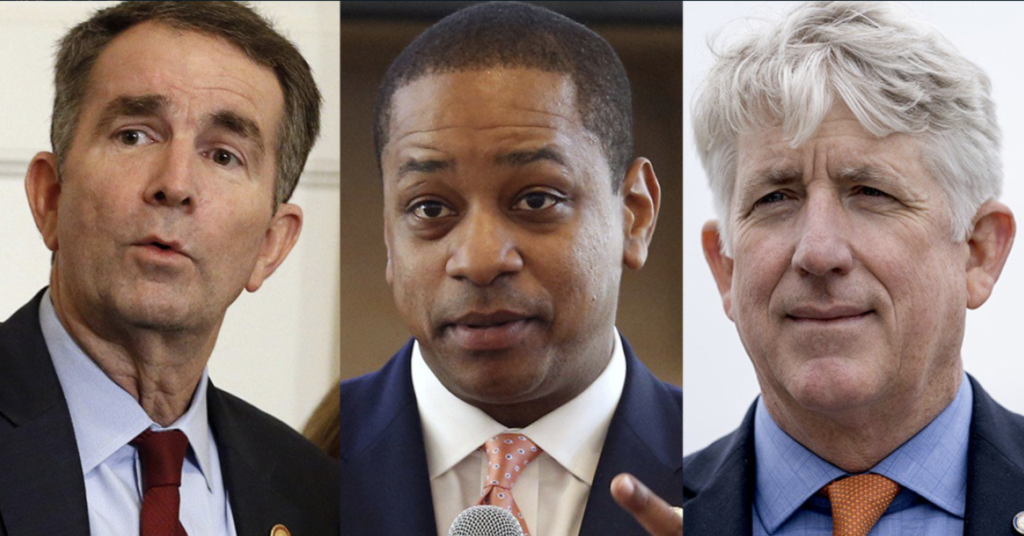 What The Hell Is Going On In Virginia?

The political crisis in Virginia deepened on Wednesday when the attorney general admitted to wearing blackface in the 1980s at a college party, becoming the state’s third high-ranking Democrat caught up in scandal.

Governor Ralph Northam was already fighting for his political life over a racist photo from his 1984 medical school yearbook that emerged last week, and the lieutenant governor sought on Wednesday to fend off allegations of sexual misconduct.

Attorney General Mark Herring, 57, who has expressed gubernatorial ambitions and called four days ago for Northam to resign, admitted in a statement he donned brown face paint at a party in 1980 to impersonate a rapper.

His admission came after a conservative media website published a photo on Friday from Northam’s page in his 1984 medical school year book showing one man wearing blackface beside another masked figure in robes of the white supremacist group the Ku Klux Klan.

After initially saying he was one of the two depicted in the photo, Northam changed his story and said neither was him.

A separate scandal engulfing Democratic Lieutenant Governor Justin Fairfax, 39, who is black and would succeed Northam were he to step down, intensified on Wednesday when a woman accused him of sexually assaulting her at the Democratic National Convention in 2004.

Herring, who like Northam is white, is second in line to succeed the governor as attorney general.

The simultaneous controversies embroiling the top three-elected politicians in the executive branch of Virginia’s government raised the unlikely prospect of Democrats losing the governorship to a Republican. Kirk Cox, Republican speaker of Virginia’s House of Delegates, is third in the constitutional line of succession.

Cox, 61, a former high school teacher who has served in the state’s Republican-controlled House since 1990, issued a statement on Wednesday saying the controversies in the executive branch “are disturbing” but “will be resolved in due course.” In the meantime, lawmakers would focus on budget deliberations and “hundreds of bills remaining before us.”

Northam has remained out of public view since Saturday, when he held a news conference to address the furor over his yearbook pictures, which sparked calls for his resignation from fellow Democrats in Virginia, a key swing state in the 2020 presidential race.

Civil rights groups and at least five Democratic candidates for the White House also have urged Northam to step down.

Despite the Democratic Party’s current zero tolerance for bigotry and sexual misconduct, Democrats might be motivated to rally behind Northam if faced with the prospect of Republicans suddenly assuming the governorship.

In his statement, Cox singled out the allegations against Fairfax as “extremely serious.” The lieutenant governor has acknowledged knowing his accuser but on Wednesday repeated his assertion their encounter was consensual.

The woman, Vanessa Tyson, in a statement issued by Washington law firm Katz, Marshall & Banks, said that Fairfax forced her to perform oral sex on him in a hotel room.

“I cannot believe, given my obvious distress, that Mr. Fairfax thought this forced sexual act was consensual,” Tyson said in the statement, which was published by multiple U.S. media outlets.

The same website that disclosed Northam’s yearbook photo was the first to report Tyson’s allegations on Monday.

After she came forward, Fairfax again denied wrongdoing but asked that she be treated with respect.

“But I cannot agree with a description of events that I know is not true,” he said in a statement.

Elected officials in both parties have recently seen their careers ended by allegations of racism and sexual misconduct.