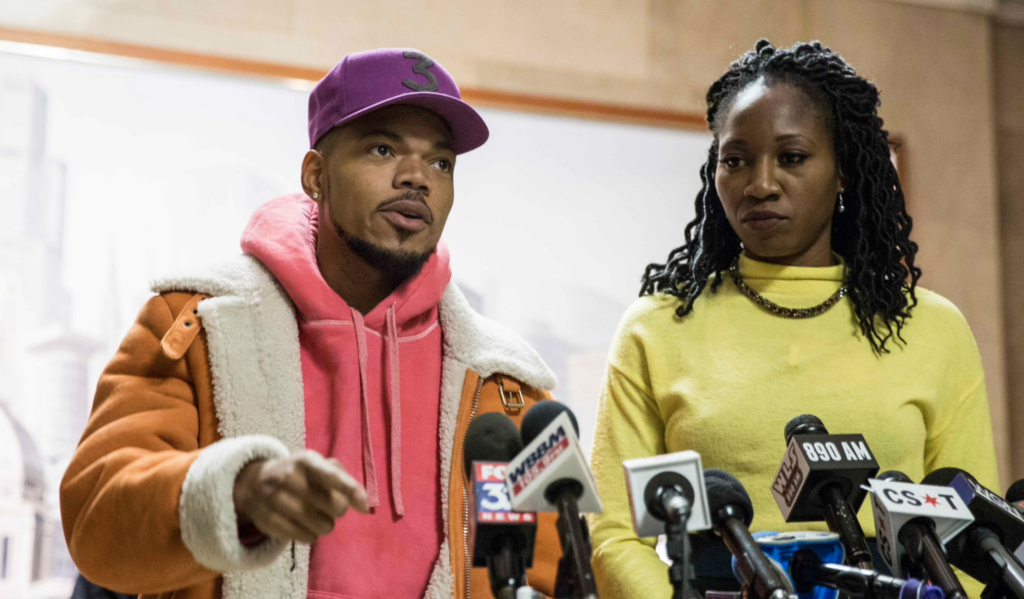 Chance The Rapper Picks A Mayor for Chicago

Declaring that he will “probably never” run for mayor himself, Chance the Rapper on Tuesday endorsed Amara Enyia in the crowded race to replace Mayor Rahm Emanuel and promised a “massive” voter registration drive to get her elected.

“I’d like to say very narcissistically, if I back you, you have a chance — absolutely,” the Grammy-winning hip-hop artist told a jam-packed City Hall news conference.

To the cheers of his supporters in attendance, Chance flatly declared, “You are looking at the next mayor of Chicago.”

Enyia said the announcement on Tuesday is “just the beginning” and “not your typical, flash-in-the-pan endorsement.”

She promised a “massive” voter education and registration drive that will energize millennial voters who took to the streets to demand justice for Laquan McDonald.

“Chicago can only be a great city if more than 30 percent of eligible voters are registered and participating in our elections,” she said.

“Our campaign has the energy. It has the excitement. And it has the commitment to engage, inspire and galvanize Chicagoans.”

Chance added, “We will see the largest 18-to-25 voter turnout in Chicago’s history” in a mayoral election.

Asked if he would also contribute to Enyia’s underfunded campaign, Chance said it was a definite possibility.

If this music thing doesn’t work out, Chance may well have a future in sales, marketing and promotion.

After teasing his 8 million Twitter followers on Monday about running for mayor himself, the rapper appeared before a phalanx of cameras to end all suspense.

“When I started talking about this, it obviously caused a firestorm in the tweets. All the candidates started sweating,” he said.

“I’m proud to announce that I will not be running for mayor . . . I probably won’t ever be running for mayor of this city. But I believe that me and Amara share a vision on what Chicago could be. We believe in supporting the people at the bottom economically — people who have just been written off.”

The Enyia endorsement puts Chance at odds with his father.

Ken Bennett quit his job as Mayor Rahm Emanuel’s director of public engagement during the tumultuous days that followed release of the Laquan McDonald shooting video.

He’s now supporting Cook County Board President Toni Preckwinkle for mayor. In fact, the elder Bennett served as master of ceremonies during Preckwinkle’s highly-orchestrated entry into the mayoral race.

Asked Tuesday why not Preckwinkle, Chance was careful not to trash his father’s candidate.

“Are you asking me why I didn’t side with my dad? Like I said first, Amara is the most qualified candidate,” he said.

“As far as my dad goes, that’s my family. At the end of the day, I’m always gonna love my dad. I’m gonna always rock with my dad. But that has nothing to do with what I see as the future of Chicago.”

Ken Bennett, who now holds a top job at the tourism agency known as Choose Chicago, did not return repeated phone calls.

On Tuesday, Preckwinkle tried to mitigate the impact of the Chance endorsement — by flattering both father and son.

“I’m honored to have Ken as an advisor and chair of my campaign . . . I’m grateful to be among those whom have benefitted from Ken’s incomparable experience and unfailing commitment,” Preckwinkle was quoted as saying in an emailed statement.

“Ken is a dedicated and loving husband and father who has clearly passed on his love for his city and his value in public service and advocacy. I respect his son’s commitment to our city, his eagerness to engage in the issues impacting our communities and his willingness to use his platform to express his opinion.”

Tuesday’s endorsement session is not the first time Chance has dipped his toe in Chicago politics.

The rapper’s charity has raised millions for the Chicago Public Schools, and he has stood toe-to-toe with Gov. Bruce Rauner in an attempt to shame the embattled Republican governor on the issue of education funding.

Chance was outspoken in his criticism of Emanuel, long before the mayor pulled the plug on his own re-election bid.

The rapper has been equally outspoken in his opposition to Emanuel’s $95 million plan to build a new police and fire training academy in West Garfield Park, a project Chance has denounced as a symbol of Emanuel’s misplaced priorities.

The celebrity scolding did not stop aldermen from authorizing a $9.6 million land sale that will pave the way for construction of the training campus. Several major hurdles remain for a project that still has a $37 million funding gap.

The question now is what impact, if any, will Chance’s endorsement have on the crowded race for mayor?

Will his celebrity power motivate his millennial followers notorious for their political indifference?

Or will Enyia languish in the crowded field, while Chance walks away the winner with yet another priceless round of feel-good publicity.

“It’s definitely gonna give [Enyia’s] candidacy some viability. But I wouldn’t put her in the top-tier of candidates,” said one Democratic strategist unaffiliated with any mayoral candidate.

“If anybody gets hurt by it, it’s Preckwinkle. She already had generational issues. This is going to complicate those problems. Now, she has one more African-American candidate to worry about who will have a following among young voters.”