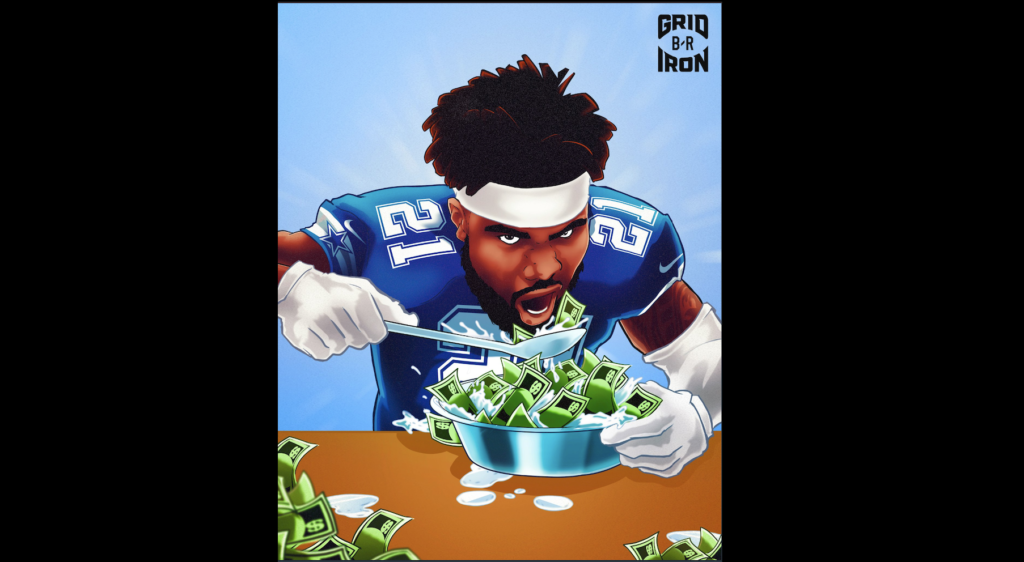 Who Say’s Running Backs Are Devalued???

The Dallas Cowboys and Ezekiel Elliott have come to terms on a six-year, $90 million contract extension, a source told ESPN on Wednesday.

The deal has $50 million guaranteed, a source told ESPN’s Ed Werder, surpassing Todd Gurley’s $45 million as the most for an NFL running back. Elliott, 24, was under contract through 2020 and was set to make $3.853 million in 2019 and $9.09 million on the fifth-year option in 2020, making his total compensation through 2026 more than $100 million, which makes him the highest-paid running back in NFL history.

It’s not clear when the deal will be announced because Cowboys owner Jerry Jones and his son, executive vice president Stephen Jones, are in New York to ring the opening bell at the New York Stock Exchange.

The plan is for Elliott to be at practice Wednesday, ending the running back’s holdout just five days before the Cowboys’ season opener against the New York Giants.

Elliott missed all of training camp and preseason as negotiations continued, moving his base camp to Cabo San Lucas, Mexico, before the deal was reached.

The Cowboys drafted Elliott with the No. 4 overall pick in the 2016 draft, and he quickly emerged as one of the NFL’s best backs.

He set a Cowboys rookie record with 1,631 yards, which led the league, and 15 touchdowns in 15 games. He led the league in rushing in 2018 with 1,434 yards — once again playing in only 15 games, as his coaches opted to rest him for the season finale with the Cowboys’ playoff seeding set.

Elliott is the fifth player since the NFL/AFL merger in 1970 to lead the league in rushing twice in his first three seasons. Cowboys Hall of Famer Emmitt Smith, the NFL’s all-time leading rusher, also accomplished the feat in 1991 and 1992.

In 2018, Elliott joined Herschel Walker as the only Cowboys running backs to have more than 1,000 yards rushing and 500 yards receiving in the same season.

But it has not been all smooth for Elliott.

He was suspended six games in 2017 for violating the league’s personal conduct policy stemming from an alleged assault in 2016 with a former girlfriend in Columbus, Ohio. Elliott was never charged or arrested, but the league punished him in accordance with the policy, starting a string of events that led to a long court battle until Elliott acquiesced.

Elliott was not punished by the NFL after an incident in May involving a security guard at a music festival in Las Vegas. Through all the off-field issues, the Cowboys have supported Elliott.

Elliott remains subject to fines of $40,000 per day for missing training camp and could also be forced to pay back a little more than $1 million of a prorated portion of the signing bonus he received when he signed his rookie deal. The decision to hold Elliott responsible for those payments is at the team’s discretion.

With Elliott under contract, the Cowboys can now focus more on the contracts for quarterback Dak Prescott and wide receiver Amari Cooper.

They have had conversations with the agents for both and are expected to have more. Prescott and Cooper can become unrestricted free agents when the season ends. However, because 2020 is the final year of the collective bargaining agreement, the Cowboys would have the ability to use the franchise and transition tags to keep the QB and receiver.

Prescott is due to make $2.02 million and Cooper $13.9 million on the fifth-year option of his rookie deal.