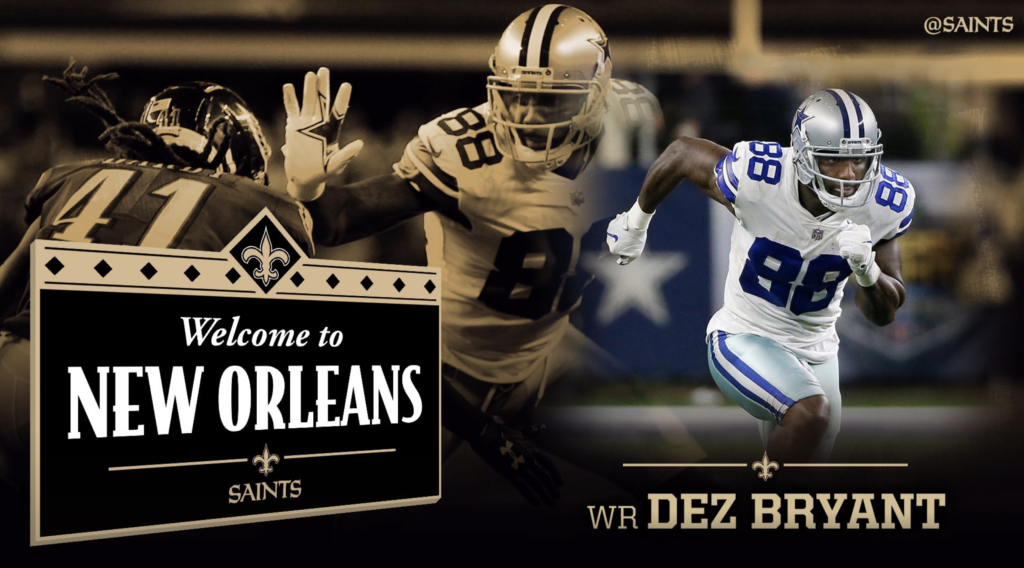 The former Dallas Cowboys wide receiver, who has been looking for an NFL home since becoming a free agent in April, will now have a chance to catch passes from one of the most prolific quarterbacks in NFL history in New Orleans’ Drew Brees.

The 30-year-old Bryant and the Saints agreed to contract terms on Wednesday, and it remains unclear to what extent Bryant will play when New Orleans visits Cincinnati on Sunday.

Bryant spent his first eight years in the NFL with Dallas and last season caught 69 passes for 838 yards and six touchdowns, including a 50-yard scoring play, for the Cowboys.

However, his professional reputation has been marred at times by public confrontations with coaches and teammates during games and practices.

Veteran Saints tight end Ben Watson said players in New Orleans’ locker room must guard against pre-judging Bryant based on superficial observations from old television clips without knowing all the facts or how Bryant has evolved personally since.

“I don’t know Dez. I wasn’t in the locker room with him in Dallas. I don’t know all the dynamics,” Watson said. “I also don’t know what’s transpired with him personally since that situation. So the great thing about a locker room, I think, is we take guys in and we say, ‘Hey, what are you like now?'”

Last season was Bryant’s best since he caught 88 passes for 1,320 yards and 16 TDs in 2014, which at the time was his third consecutive season with at least 1,200 yards receiving. He signed his last Cowboys contract right after that, but has not approached that level of production since — a central reason Dallas released him in April.

“What matters is, what are we going to do for the next eight games?” said Watson, who played for the Patriots when running back Corey Dillon arrived with a reputation as a malcontent from Cincinnati in 2004 and helped New England win a Super Bowl.

Watson was still with the Patriots in 2007 when they added another perceived malcontent in receiver Randy Moss, who caught 23 of Tom Brady’s NFL-record 50 TD passes that season.

“People change over time and there are certain factors you just don’t know about. So we just move forward,” Watson said. “If somebody’s new, you have a clean slate and you embrace that person because now they’re your teammate.”

Bryant was among several receivers to work out for the Saints on Tuesday. He’d previously met with Cleveland and Baltimore.

Led by the record-setting Brees, the Saints rank seventh on offense overall, averaging 402.2 yards per game, and seventh in passing, averaging 289.9 yards. At the same time, New Orleans is without deep threat Ted Ginn Jr., who is currently on injured reserve and won’t be eligible to return until the final few weeks of the season, if he’s ready by then.

The Saints also have yet to receive consistent production from Cameron Meredith, a former Chicago receiving leader who was acquired in free agency, but who also is trying to come back from major knee surgery that wiped out his 2017 season.

Bryant’s return to the NFL with the Saints means he could play against his former club in a few weeks. The Saints play at Dallas on Nov. 29.

“They’re getting a great receiver. He goes up and attacks the ball better than I’ve seen anyone,” Cowboys running back Ezekiel Elliot said. “He’s definitely a special player and I’m glad he got picked up and I’m glad something worked out for him.”

Added Cowboys coach Jason Garrett: “I’m happy he has an opportunity to go play and finish the right way, it will be a great environment for him to go out and make an impact.”

“The nice thing is we don’t play them until December, so we will get an opportunity to see what they are doing with him,” Panthers coach Ron Rivera said shortly after hearing about Bryant’s agreement with the Saints. “He’s a good player. He’s a guy that has shown he can go up and get the football.”