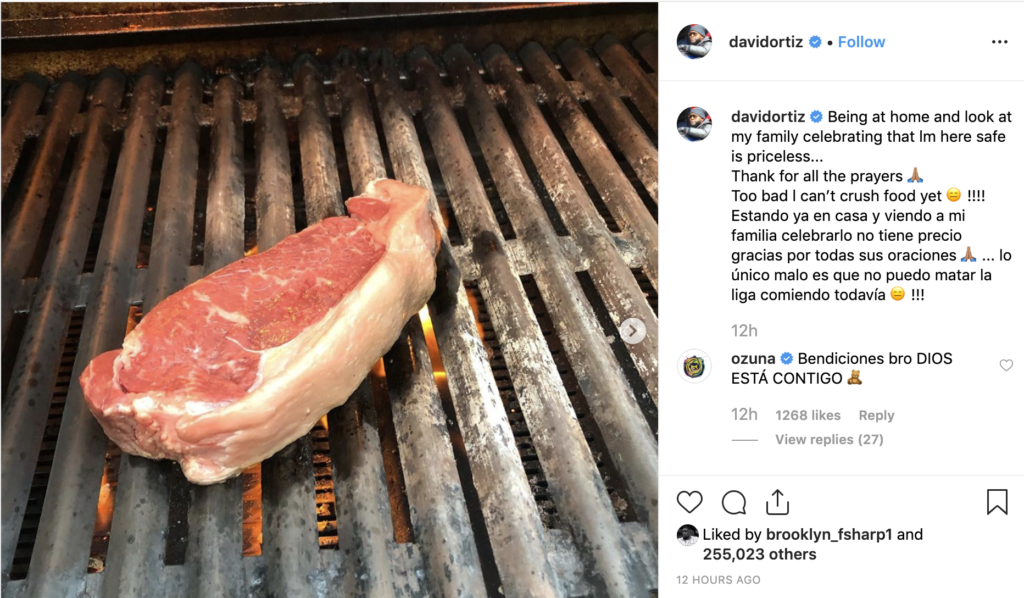 Big Papi Has A Message for His Fans

Fifty days after he was shot in the Dominican Republic, David Ortiz says he’s feeling better — even if he isn’t 100 percent.

“I am feeling good, but know I need to do my rehab just like I did when I was recovering from injuries playing baseball,” Ortiz said in a statement Monday, asking for privacy as he continues to recover from the June 9 shooting.

“Big Papi will be back soon,” he added.

The legendary Red Sox slugger is speaking out for the first time since coming home from his extended stay at Massachusetts General Hospital. In an Instagram post Monday morning, he thanked supporters and showcased the array of food his family had prepared to celebrate his return.

Ortiz was released Friday from MGH, where he has spent nearly seven weeks following the shooting. The 43-year-old underwent a total of three surgeries — one six-hour procedure at a local Dominican hospital and two follow-up operations at MGH — to address the injuries he sustained. Shot in the back from close range, his gallbladder and parts of his intestine and colon had to be removed by doctors in the initial surgery.

In the new statement Monday, Ortiz and his family reiterated their gratitude to Dr. Jose Abel Gonzalez and the medical team who performed that first life-saving surgery at the Center for Advanced Medicine in Santo Domingo on the night of the shooting. He also thanked Dr. Larry Ronan and Dr. David King, the two doctors who oversaw his treatment at MGH, as well as “all” doctors, nurses, and caregivers at the Boston hospital.

“They are some of the best teammates I have ever had,” the three-time World Series champion said.

Ortiz also expressed “deep appreciation” to Red Sox owners John and Linda Henry,  team chairman Tom Werner, president Sam Kennedy, and the “entire” organization for providing a team plane to fly Santo Domingo to Boston “and their continuing assistance to me and my family.”

He also singled out Pam Kenn, the Red Sox vice president of community, alumni and player relations, for the “help and support” she gave his wife, Tiffany Ortiz, “providing the media updates on my medical condition.” In turn, Tiffany also thanked the team’s vice chairman, Phil Morse, for “special acts of kindness and concern during a difficult time for me and my family.”

Dominican authorities now say Ortiz — a massive celebrity in his native country — was the victim of a case of mistaken identity; the shooter in the nighttime ambush apparently meant to target the retired MLB player’s friend Sixto David Fernandez, who was seated with him at the time outside the crowded Dial Bar and Lounge in Santo Domingo. Police have arrested at least 14 people in the case, including Fernandez’s cousin Víctor Hugo Gómez, who they say ordered the attempted killing. Gómez denies he did so.

It’s unclear how long Ortiz’s home recovery will take. According to ESPN, he will continue to be assisted by full-time nurses and visited regularly by his personal physician.