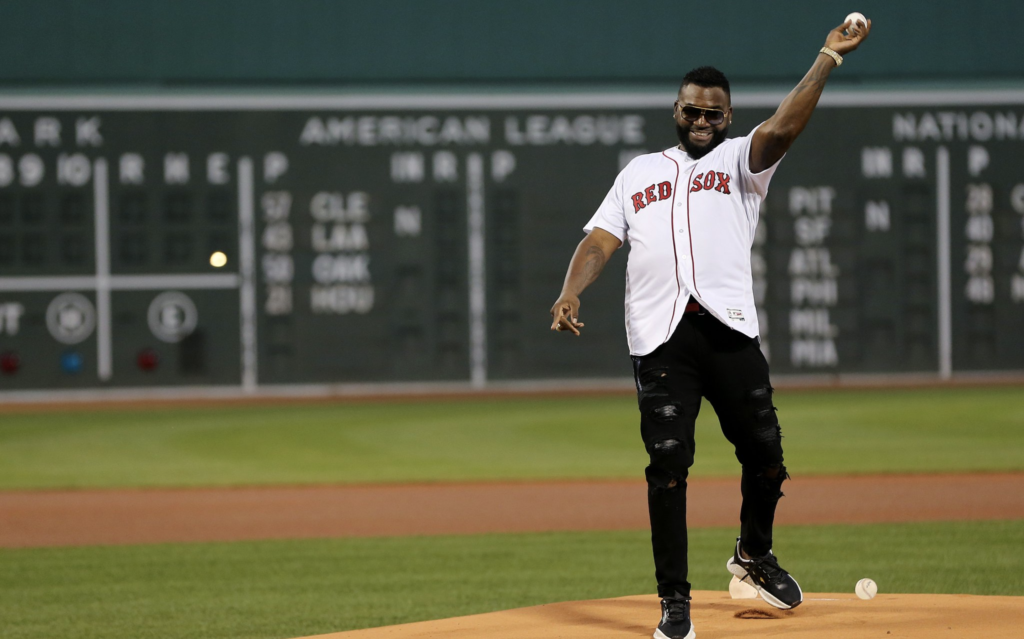 In a wild 24 hours for the Red Sox that centered around the firing of president of baseball operations Dave Dombrowski late Sunday night, for a moment, the dark clouds that hovered this year over Fenway Park cleared.

David Ortiz made his first public appearance Monday evening to throw out the ceremonial first pitch prior to the Red Sox’ series finale against the Yankees. Former Red Sox catcher Jason Varitek caught the throw.

Three months to the day since he was shot in the Dominican Republic, Ortiz jogged onto the field after he was described by the park announcer as “the symbol of resilience, strength, triumph and love . . . our one and only, Big Papi.”

Afterward, Ortiz addressed the crowd in front of the pitcher’s mound.

“Good evening,” said Ortiz, who was met with cheers. “First of all, I want to thank God, for giving me a second opportunity of my life and being able to be here with all of you. I want to thank the Red Sox — my real family — they always have been there for me, supporting me no matter where I’m at. They were the first ones to support me. Thank you very much.

“I want to thank all of you for all the prayers. I want to thank my former teammates for being there for me also. All of them came over to check up on your boy.

“Also, I want to thank the Yankees, allowing my boys to come over and check up on Big Papi. CC [Sabathia], you showed a lot of love. Thank you very much. God bless you all. Go Sox.”

Ortiz then made his way off the mound and embraced those that were standing in front of the home dugout. He then sat down in the first row of the stands, alongside his wife Tiffany, and watched the game.

“I think any time you see a brother or teammate in good spirits, it’s a positive thing,” Jackie Bradley Jr. said after the game. “We’re excited to see him. He’s special to all of us.”

Said Eduardo Rodriguez: “It was amazing. I was walking out from the bullpen to the dugout and I turned to the big screen and saw he was out there. It was a really good moment for all of us.”

“I always said that David is kind of like a rock star baseball player, that vibe, it’s amazing,” he said. “I’m glad that he was able to come here and hang out with us.”

Ortiz was shot June 9 at a bar in the Dominican Republic. He spent weeks undergoing rehab at Massachusetts General Hospital, but was seen recently in France earlier this month with Red Sox owner John Henry.