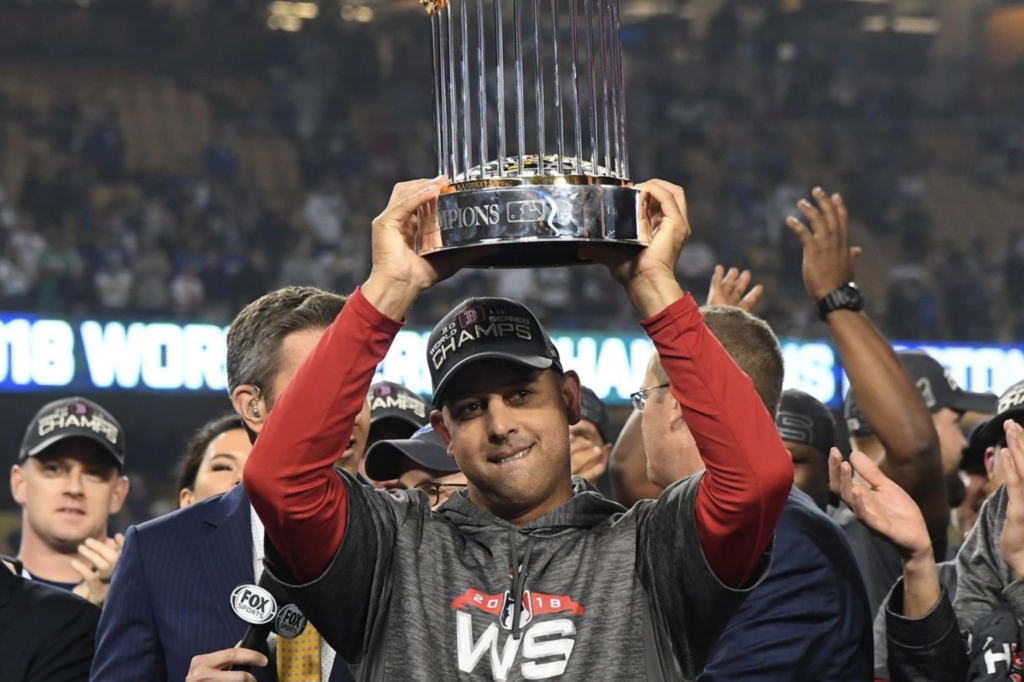 Alex Cora, who won the World Series in 2018 in his debut season as manager of the Boston Red Sox but has been linked this offseason to two sign-stealing schemes, has mutually agreed to part ways with the team.

Cora, 44, led the Red Sox past the Los Angeles Dodgers in five games in 2018, one year after he won the World Series as the Astros’ bench coach.

In MLB’s findings on Houston announced Monday, Cora is described by commissioner Rob Manfred as being “involved in developing both the banging scheme and utilizing the replay review room to decode and transmit signs. Cora participated in both schemes, and through his active participation, implicitly condoned the players’ conduct.”

In a statement released Tuesday, the Red Sox said that given the investigation’s findings, “we collectively decided that it would not be possible for Alex to effectively lead the club going forward.”

Manfred said he was withholding discipline for Cora until MLB completes its investigation into the allegations against the Red Sox, but he is expected to receive a harsh penalty.

“We agreed today that parting ways was the best thing for the organization,” Cora said in Tuesday’s statement. “I do not want to be a distraction to the Red Sox as they move forward. My two years as manager were the best years of my life. It was an honor to manage these teams and help bring a World Series Championship back to Boston.”

The Astros acted quickly after discipline for the team was announced Monday, firing both manager AJ Hinch and general manager Jeff Luhnow. Had they stayed with Houston, Hinch and Luhnow would have been suspended for the entire 2020 season. Houston was also fined $5 million and will lose its first- and second-round draft picks in 2020 and 2021.

The Red Sox allegedly used video to decode opponents’ sign sequences and passed the information to their players. But they are not accused of going as far as the Astros in terms of communicating the knowledge — such as the Astros’ trash-can banging — to players at the plate.

Cora replaced John Farrell as Boston’s manager after the team twice finished last under Farrell, despite winning the 2013 World Series with him. With Cora at the helm in 2018, the Red Sox raced to a 108-54 regular-season record and an easy win in the AL East. They led the majors with a .268 team batting average and 876 runs scored.

Boston then dominated the postseason with an 11-3 mark, posting wins over the Yankees and Astros in the AL division and championship series, respectively, before defeating the Dodgers in the World Series.

Not long after Cora’s club paraded through the streets of Boston, the Red Sox announced that they had renegotiated his contract, including an extension through the 2021 season, with a club option for 2022.

“This is a sad day for us,” owner John Henry, chairman Tom Werner and CEO Sam Kennedy said in a shared statement. “Alex is a special person and a beloved member of the Red Sox. We are grateful for his impact on our franchise. We will miss his passion, his energy and his significant contributions to the communities of New England and Puerto Rico.”

The Red Sox couldn’t sustain 2018’s success in Cora’s second season, finishing 84-78 and third in the division, 19 games behind the Yankees.

Cora, who worked as an ESPN analyst before leaving for the Astros, played 14 MLB seasons, including parts of four seasons with the Red Sox, winning the 2007 World Series with Boston. He also played for the Dodgers, Indians, Mets and Rangers before finishing his career with the Washington Nationals in 2011.

A utility infielder largely known as a shortstop, Cora was a career .243 hitter and finished with 35 home runs and 286 RBIs.