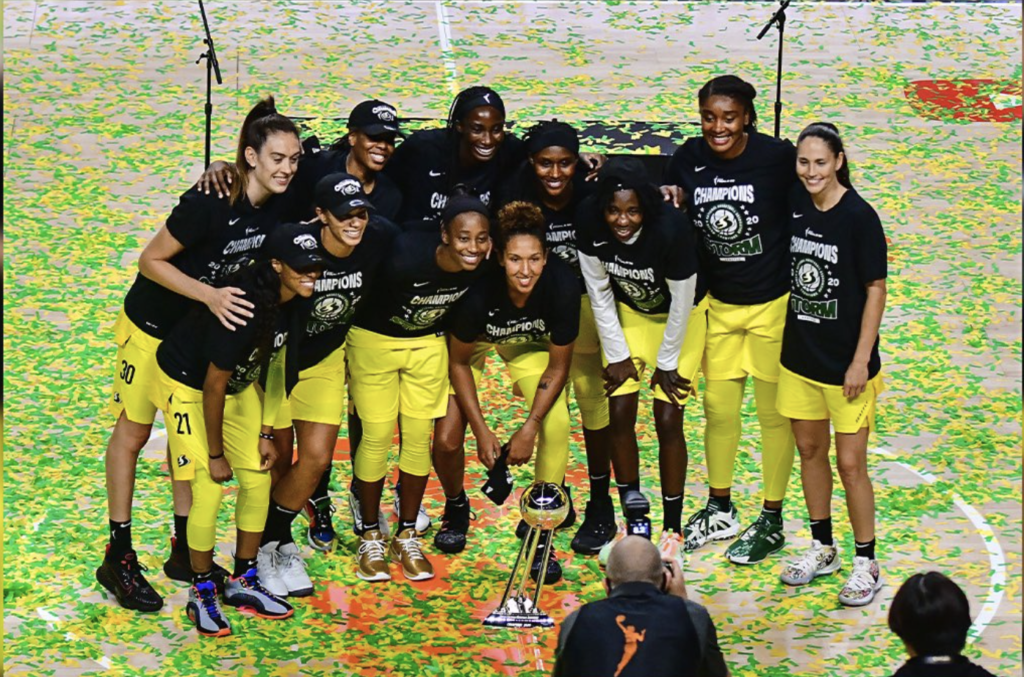 Seattle Storm forward Breanna Stewart added to her extensive trophy collection Tuesday night with a second WNBA title and a second WNBA Finals MVP award. A year ago at this time, she was recovering from an Achilles injury that forced her to miss the 2019 WNBA season.

Stewart had 26 points and four rebounds as the No. 2-seeded Storm completed a three-game sweep of the 1-seed Las Vegas Aces with a 92-59 victory at IMG Academy in Bradenton, Florida. The 33-point margin of victory was the largest in WNBA Finals history.

Stewart, who turned 26 in August, was the unanimous choice for MVP. Only four other players have won two Finals MVP awards: the Houston Comets’ Cynthia Cooper, the Los Angeles Sparks‘ Lisa Leslie, the Phoenix Mercury‘s Diana Taurasi and the Minnesota Lynx‘s Sylvia Fowles.

“I wasn’t sure if I was ever going to be back to where I was,” Stewart said of her fears from the Achilles injury she sustained while playing in Europe in April 2019. “But to be here and see myself playing like this and having so much potential going forward, it’s exciting but also really appreciating what we were able to do this year.”

Stewart, who shot 10-of-14 from the floor in Game 3, had her sixth consecutive WNBA Finals game with at least 20 points. That is the longest such streak in history, passing Cooper, who had five in a row for Houston from 1997 to 1999, and Angel McCoughtry, who had five straight for the Atlanta Dream from 2010 to 2011.

The star forward was the No. 1 draft pick out of UConn in 2016 after winning four consecutive NCAA titles with the Huskies. She was named rookie of the year for her first WNBA season, and she was a league champion in 2018, her third year.

Stewart had to watch the WNBA Finals last year while rehabbing her Achilles. It was the first serious injury of her career, which at that point included not just her success in college and in the WNBA, but also with USA Basketball with gold medals in the 2016 Olympics and the 2018 FIBA Women’s World Cup.

“You know, I remember where I was last year during the WNBA Finals — I was in North Carolina with my family,” Stewart said, “and it was hard for me not to be upset because I wanted to be a part of the league.

“Obviously, I wanted to be with my team and have the opportunity to be back and defend our title. To be able to be here, to get through all that we’ve gone through as a team, obviously individually, it’s an amazing feeling. There’s so much of an unknown after rupturing my Achilles. I don’t know if I’m proud of myself but, you know, proud of what I’ve done … really proud of just being able to be back.”

Stewart returned to action in late January in an exhibition with the U.S. national team. Then, she went back overseas to play, until the COVID-19 pandemic cut short her European season. She was ready to go for the 2020 WNBA season. Earlier this year, she said she would give herself an A-minus or B-plus for this season, but then she acknowledged that she was being a tough grader.

“Stewie is just one of those players, a generational player that comes through once in a while that can face adversity and even get stronger because of it,” Seattle coach Gary Kloppenburg said. “I think that’s what we saw with her. She came back as a better player in pretty much every category, on both sides of the ball. Pretty incredible testament to her work ethic and her desire to be such a great player and such a great teammate.”

This 24th WNBA campaign had a regular season shortened to 22 games because of the coronavirus pandemic. The Storm finished 18-4, as did Las Vegas. The Aces won both regular-season games — Bird didn’t play in either game, and Stewart played in one — and that gave them the top seed. Aces forward A’ja Wilson won the league’s regular-season MVP award, with Stewart coming in second.

In the postseason, the Storm ruled. They swept Minnesota in the semifinals with only one close game — the opener, which they won 88-86 on a last-second putback by Alysha Clark. The Storm won their other five playoff games by double digits.

“The city of Seattle has always had our back,” Stewart said after Tuesday’s win. “We had the utmost support from everybody, and we’re bringing another [title] back.

“I think the greatest challenge was just all the adversity. Everybody bought in. We’re a chill team, and we kind of rolled with the punches and continued to do what we do. Now we’re the champs.”