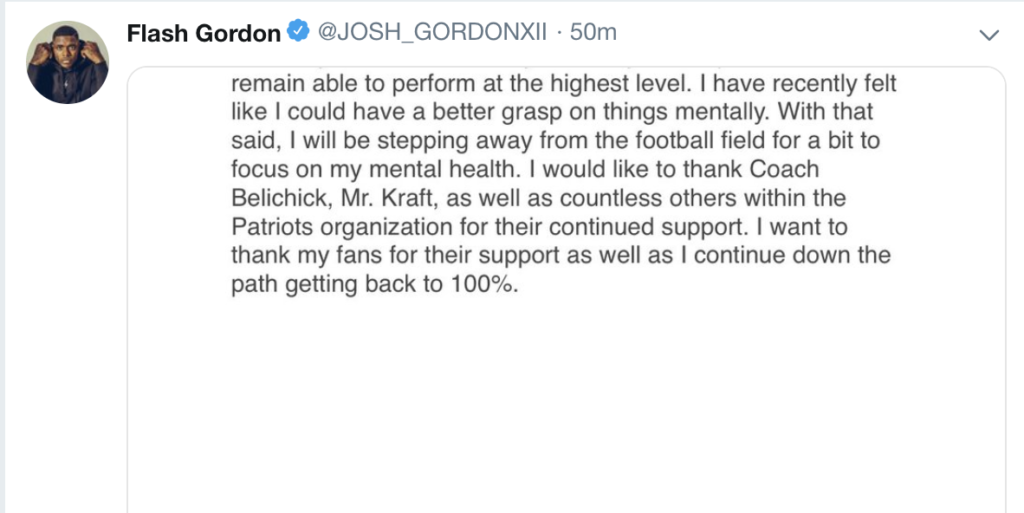 Josh Gordon is stepping away from football to focus on his mental health.

The New England Patriots receiver announced the decision on Thursday.

“I take my mental health very seriously at this point to ensure I remain able to perform at the highest level,” Gordon wrote in a statement. “I have recently felt like I could have a better grasp on things mentally. With that said, I will be stepping away from the football field for a bit to focus on my mental health. I would like to thank Coach Belichick, Mr. Kraft, as well as countless others with the Patriots organization for their continued support. I want to thank my fans for their support as well as I continue down the path to getting back to 100 percent.”

Gordon has a long history of mental health and substance abuse issues.

The star receiver missed two full seasons while being suspended and participated in just 10 games between 2014 and 2018.

NFL Network’s Tom Pelissero reported that Gordon is facing another indefinite suspension for violating terms of his reinstatement under the substance abuse policy, according to a source informed his status.

It’s a sad situation for the immensely talented but struggling receiver.

If Gordon is indeed banned again, it would be a long road back and could spell the end of the 27-year-old’s NFL career. If he never plays another NFL down, Gordon’s story will be remembered as an all-time coulda, woulda, shoulda player.

Gordon’s situation will affect a playoff-bound Patriots team, but more importantly, we hope Gordon gets the help needed to one day find peace in his life, even if that future doesn’t involve football.