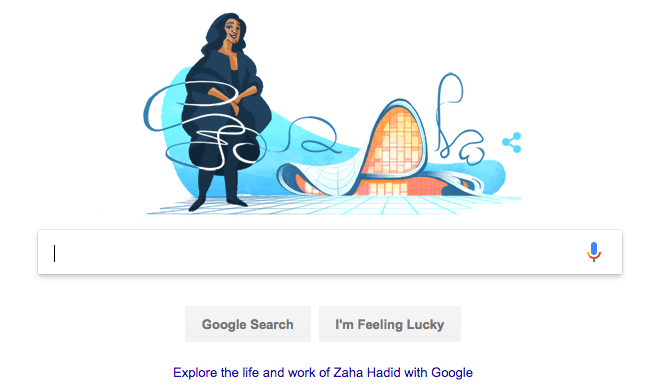 Iraqi-born British architect Zaha Hadid, was the first female winner of the top Pritzker Architecture Prize on this day in 2004.

She also received the UK‘s most prestigious architectural award, the Stirling Prize, and she became the first woman to be awarded the 2016 Royal Gold Medal in architecture by the Royal Institute of British Architects.

Today, Zaha’s ongoing legacy is featured by Google, who is paying homage to a woman “who captured the world’s attention and shattered glass ceilings.”

Zaha Hadid was born into a prominent family in Baghdad during the last years of the Hashemite monarchy.

She grew up in the aftermath of the military coup led by Brigadier General Abdul Karim Qassim, and left for Beirut to continue her college education in mathematics, before moving to London to study architecture.

“Hadid took a fistful of everything that was good and beautiful in her homeland … and with it, she signed her signature on every corner of the globe she visited,” Hamid Dabashi wrote.

In 1979, she established her own practice in London, the Zaha Hadid Architects. She was a woman in a field dominated by men, but her passion was in pushing the limits of design.

“I never use the issue about being a woman architect,” she said in an interview to Icon magazine, “but if it helps younger people to know they can break through the glass ceiling, I don’t mind that.”

The artist reshaped modern architecture using the surrounding landscape for building inspiration. She was known for her neofuturistic design.

The lines and sharp angles of the Vitra Fire Station in Germany were inspired by nearby vineyards, and the roof of the London Aquatic Centre forms the shape of a wave.

The artist was also behind the design of the Al Wakrah Stadium, for the 2022 Qatar World Cup.