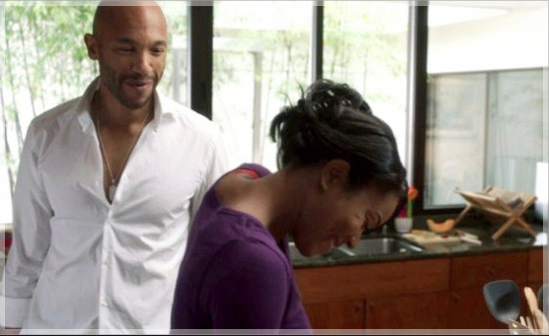 You’ve seen him on the big screen staring along Hollywood heavyweight Brad Pitt (Moneyball) but it’s his role as David Paulk on BET’s hit series Being Mary Jane that gave fans an up-close and personal look at the intimate side of Stephen Bishop.

The 43-year-old Chicago native partakes in an on-again, off-again relationship with star Gabrielle Union who made the jaw-dropping and controversial decision to steal his sperm in the shows first season. The saga continues with David’s new live-in girlfriend now pregnant with his child. Even through the complexity of their relationship fans still hold a glimmer of hope that these two will end up together.

The Trending Report talked with Bishop and asked him that very question, ‘Should Mary Jane Paul and David end up together?’ Here’s what he said.

“I think they should. Clearly they have chemistry and clearly they are in a position to be a power couple. They just need to get on the same page and work it out and say, hey, let’s put all the childish things behind us and let’s really lock ourselves into this and make it happen.”

Will that actually happen? We’ll have to watch the season for those details, of course.

For those wondering what an actual date with Bishop will look like, we asked a few questions that will give you an inside glimpse into his dating style.

TR: What music is playing in the car when you pick up your date?

SB: When I get there it will be Jay Z or Lil Wayne then that will quickly change to whatever she wants to hear. I don’t have much in my car other than hip hop.

TR: Are you bringing flowers or do people not do that anymore?

SB: Yeah I still give flowers. I give flowers all the time just for random, just because reasons. I don’t think I’d give them on a date though because then they’ll sit in the car all night.

TR: Are you in a suit or dressed casually?

SB: Normally I’m casual. I don’t wear suits unless I have to. I accessorize to dress up my look.

TR: What would you and your date talk about?

SB: I like to talk about current events as much as I can and what’s going on in her world. I feel it out and see where the conversation goes.

TR: Fill in the blank. You would be most impressed if your date did what?

SB: Hmmm. There’s the typical offer to pay which is lame because I’m not going to let her anyway. I would be most impressed if my date intellectual stimulated me and taught me something.