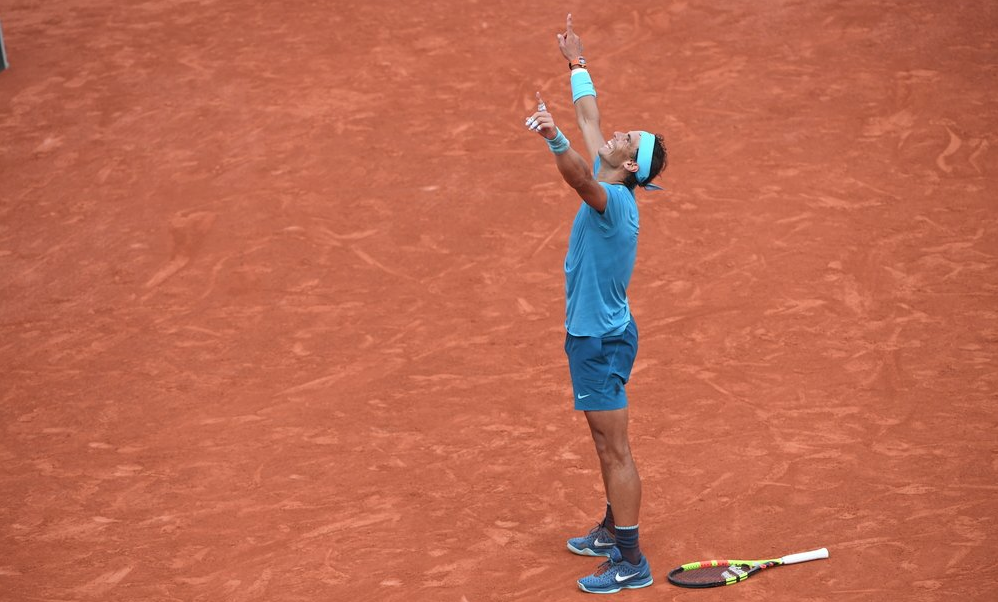 In full control of the French Open final, a rather familiar position for him, Rafael Nadal suddenly was worried.

He led by two sets plus a break early in the third, when the middle finger on his racket-wielding left hand was cramping so badly he couldn’t straighten it. After serving a fault, Nadal took the unusual step of heading to the sideline in the middle of a game.

“Tough moment,” Nadal would say later. “I was very scared.”

Up in the stands, Nadal’s uncle Toni, his former coach, was nervous, too, “because I thought maybe we can have a problem,” he said. “But in the end, it was not too difficult.”

It rarely is for Nadal at a place he has lorded over the way no other man ever has at any Grand Slam tournament. Nadal dealt with that ultimately minor inconvenience and claimed his record-extending 11th French Open championship Sunday by displaying his foe-rattling excellence in a 6-4, 6-3, 6-2 victory over No. 7 seed Dominic Thiem.

“There is a reason why he won 11 times here,” said Thiem, a 24-year-old Austrian appearing in his first major final. “It’s definitely one of the best things somebody ever achieved in sport.”

Thiem was on the couch, watching on TV, in 2005, when Nadal earned his first Grand Slam trophy in Paris at age 19. That began a run of four consecutive French Open triumphs through 2008. He added five straight from 2010-14 and now has two in a row.

Throw in three titles at the U.S. Open, two at Wimbledon and one at the Australian Open, and Nadal is up to 17 majors, second among men only to Roger Federer’s 20. The two stars have combined to win the past six Slams.

The victory also allowed the 32-year-old Nadal to hold onto the No. 1 ranking, ahead of Federer.

If there were any reason for a bit of intrigue entering Sunday, it was this: Thiem beat Nadal on red clay at Rome in May 2017 and again at Madrid last month.

But those are not quite the same as the French Open, where Nadal is 86-2 for his career.

“I am sure you will win here in the next couple of years,” Nadal told Thiem afterward.

Against many other opponents — maybe ANY other — Thiem would have made things interesting. He pounded huge serves that topped 135 mph (220 kph) — about 25 mph (40 kph) better than Nadal’s fastest — and translated into seven aces but also had five double-faults. He took the biggest of big cuts on groundstrokes, his feet leaving the ground as he threw his whole body into them, as if the very outcome — not of any individual point, but the whole shebang — depended on the strength of that one whip of his white racket. That led to 34 winners (eight more than Nadal) but also 42 unforced errors (18 more than Nadal).

It worked. For a bit.

Just like that, Nadal was off on a five-game burst to lead 3-0 in the second set.

By then, Nadal was finding his spots. One down-the-line forehand winner landed right at the baseline, leaving Thiem sagging his shoulders and muttering. Another forehand winner from Nadal found a corner, and Thiem yelled toward his coach.

It was a cloudy and steamy afternoon, with the temperature at 77 degrees (24 Celsius) and the humidity approaching 70 percent. Midway through the opening set, Nadal’s aqua T-shirt was so soaked with sweat it stuck to him. Those conditions might have contributed to the cramping that affected Nadal about two hours into the final, at 2-1 in the third set.

“I was not able to move the hand, the finger,” Nadal said. “I was not (in) control of my finger.”

His uncle thought wrapping around Nadal’s left forearm was too tight. When he first halted play, Nadal removed that tape, which he said let his circulation improve. At the following changeover, he was given a salt pill by a doctor and had his left forearm massaged by a trainer. After guzzling water during that break, Nadal felt better and was back to playing his unmistakable brand of nearly unbeatable clay-court tennis.

Shortly, he’d be holding the silver trophy, the one he knows so well, and crying.

A few hours earlier, as Nadal and Thiem warmed up, the booming voice of the announcer at Court Philippe Chatrier detailed the bona fides of both. Nadal’s introduction included a year-by-year accounting of every time he’d already won the French Open.

The crowd responded at the mention of 2005, initially offering polite applause. It added more voices by the time 2008 rolled around. The crescendo rose to a full-throated roar for 2017.

“If you tell me seven, eight years ago that I will be here … having this trophy with me again, I will tell you that is something almost impossible,” Nadal said. “But here we are.”