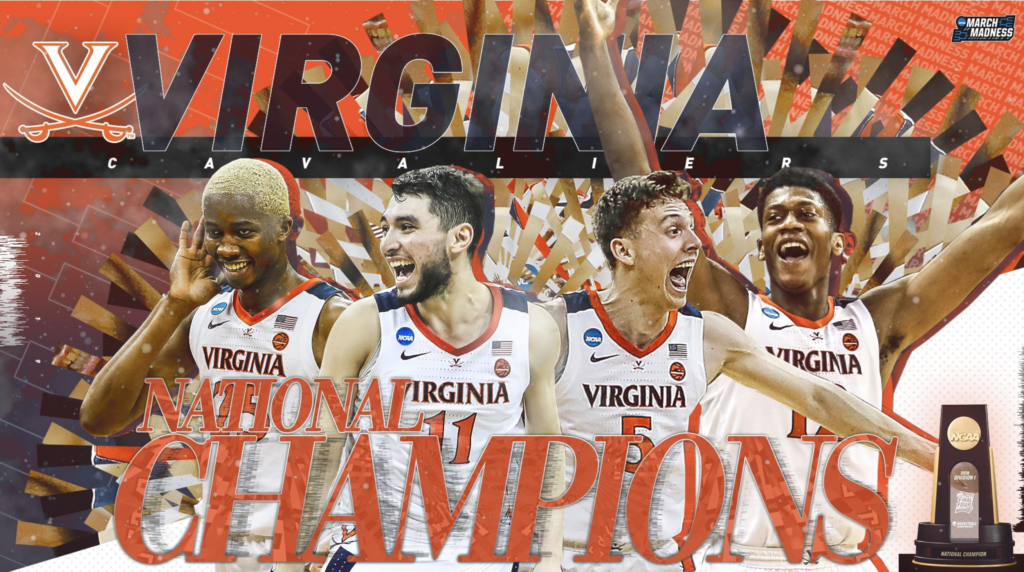 Exactly 388 days after it became the first No. 1 seed ever to flame out in the round of 64 of the NCAA tournament, Virginia secured the ultimate redemption.

A Cavaliers team that last year famously unraveled on college basketball’s biggest stage this time atoned for its past failures and authored a comeback story for the ages.

Virginia overcame a late Texas Tech rally to capture the national title in trademark dramatic fashion on Monday night, edging the Red Raiders 85-77 in the NCAA tournament’s first overtime championship game in 11 years. De’Andre Hunter scored a game-high 27 points and delivered the night’s most memorable shot at the end of regulation.

With Virginia trailing by three and less than 15 seconds left in regulation, Ty Jerome penetrated the lane, forced the Texas Tech defense to collapse on him and spotted Hunter open in the corner. Hunter made Jarrett Culver pay for leaving him free, drilling a game-tying 3-pointer to help his team force overtime.

Hunter also had the go-ahead shot in overtime in the midst of Virginia’s 11-0 game-turning surge. His 3-pointer with two minutes to go gave Virginia a lead it would never relinquish.

A title game that many expected to be a low-scoring, hard-to-watch rock fight turned out to be an instant classic. It was the first overtime national championship game in 11 years and it featured a terrific display of shot-making from both sides against elite defense.

That Monday night’s game was tense most of the way surely came as no surprise to Virginia. The Cavaliers have pulled off one narrow escape after another en route to at last demolishing their reputation as NCAA tournament underachievers.

First, Virginia flirted with doing the unfathomable again before scrambling to recover from an early 14-point deficit against 16th-seeded Gardner-Webb. Next, the Cavaliers didn’t take the lead for good until the final four minutes of a gritty Sweet 16 victory over Oregon.

Heartbreaking as it was for Virginia to become the first No. 1 seed to fall to a No. 16 last spring, there was some good that came from it. The roots of this year’s title run sprung from the ashes of that stunning loss.

As UMBC players spilled onto the floor in celebration last spring after the final buzzer sounded, Kyle Guy described how he felt as “a sugar rush of desolation.” Crying uncontrollably, Guy just idled on the floor in a daze until teammate De’Andre Hunter escorted him back to the locker room.

“As soon as I got in the locker room I hugged our seniors and I said ‘I’m so sorry,’ Guy wrote in a long social media post last April. “I went on to sit in the showers and cry alone. I wanted nothing more than my fiancé or mother to come hold me. Coach called us in the huddle and he said his closing remarks. I honestly did not hear one word.”

Instead of asking seniors Isaiah Wilkins and Devon Hall to join him at the podium, Tony Bennett brought sophomores Guy and Ty Jerome instead. Bennett wanted a pair of returning players to endure that onslaught of tough questions because he felt they needed to take ownership of that loss and learn to use it as motivation for the offseason ahead.

If Guy and Jerome thought the media’s questions were tactless, that was nothing compared to what followed from social media trolls or opposing student sections.

Duke students tried to raise money to fly a former UMBC player to Durham to sit amongst the Cameron Crazies when Virginia visited in January. Guy also received Venmo requests for money from complete strangers trying to recoup their losses from picking the Cavaliers to win their office pools.

To help his players cope with being the target of jokes, Bennett preached a mantra borrowed from a motivational speech that he showed his players at the start of the season. He urged his players to tap into their disappointment from the UMBC loss, telling them over and over, “If you learn to use it right, it can buy you a ticket to a place that you couldn’t have gone any other way.”

Where it has taken Virginia is on a crazy ride unlike any other in NCAA tournament history.

In the 34 years since the NCAA tournament expanded to 64 teams, Virginia joins 1987 Indiana and 2015 Duke as the only championship teams who lost in the first round the previous season. Not all upsets are equal though, and neither the Hoosiers nor the Blue Devils rebounded from a loss as historic or crushing as the one the Cavaliers suffered.