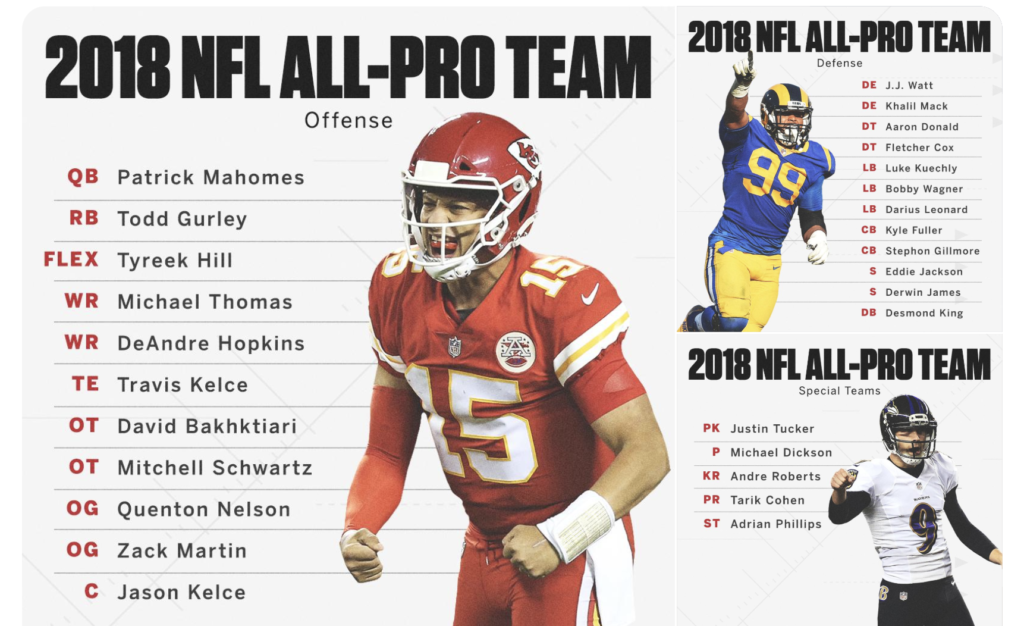 The Associated Press NFL All-Pro teams were announced Friday and one team in particular dominated the first team.

Mahomes also figures to be the favorite for the AP Most Valuable Player award, which is announced the Saturday before Super Bowl at the 8th Annual NFL Honors show, as he earned 45-of-50 votes at quarterback.

Mahomes has been instrumental in launching the Chiefs to a 12-4 record and the No. 1 seed in the AFC behind a 66 % completion rate for 5,097 yards and a league-best 50 touchdown passes.

The lone unanimous first-team selection was Los Angeles Rams defensive tackle Aaron Donald, whose 20.5 sacks led the NFL by a margin of 4.5.

Houston Texans receiver DeAndre Hopkins, who caught 115 passes for 1,572 yards and 11 touchdowns, received the most votes of any offensive player with 46.

And for the first time since 1965, two rookies on the same squad were named all-pros with Colts left guard Quenton Nelson and linebacker Darius Leonard getting recognized in their first seasons in the league. They joined Chicago Bears linebacker Dick Butkus and running back Gale Sayers as the last rookie duo to achieve the honor.

A nationwide panel of 50 media members who regularly cover the NFL submit ballots to select the all-pro teams.