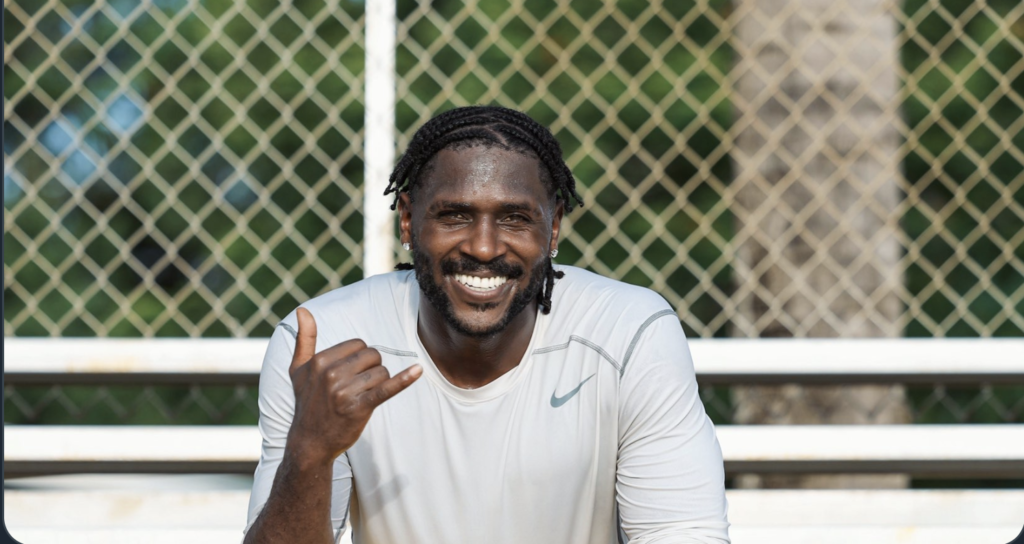 Where Will Antonio Brown Play Next?

Antonio Brown’s return to the NFL may be coming sooner rather than later.

The wide receiver’s suspension is eligible to end after Week 8, and ESPN’s Adam Schefter is reporting that multiple teams are interested in Brown. The Seahawks are the only team currently named in Schefter’s report, and he mentions that both Russell Wilson and Geno Smith’s (Seattle’s quarterbacks) are friends with Brown, have worked out with him and have remained in touch with him about the possibility of joining the Seahawks.

Schefter clarified that no official contract talks have begun with Brown, but he writes that teams are trying to position themselves to sign Brown as soon as he’s potentially reinstated, which could come in the lead up to Week 9. Here’s what to know about the possibility of Brown returning to the NFL, along with potential team fits.

Why is Antonio Brown suspended?

Brown was suspended at the end of July for eight games for violating the NFL’s Personal Conduct Policy. The suspension stemmed from his January 2020 arrest that was connected to attacking the driver of a moving company truck.

The initial Brown charge was felony assault and battery, and in March charges handed down included burglary of a vehicle, misdemeanor battery, and misdemeanor criminal mischief. Brown is still under investigation for sexual assault allegations brought on him by a former trainer in 2019. Those allegations were what led the Patriots to release him last season. The NFL could still hand down further punishment to Brown if that investigation reaches that conclusion.

When will Antonio Brown be reinstated?

Brown is eligible to be reinstated following Week 8, when his eight game suspension is complete. Despite being a free agent and not having the possibility to appear in any specific games in 2020 so far, Brown’s eight-game suspension counter still runs in conjunction with the league calendar.

Players have to go through an official application process to apply for reinstatement, and NFL commissioner Roger Goodell has power over whether a player is reinstated or not. Assuming the NFL’s ongoing investigation into Brown’s misconduct hasn’t reached any conclusions, there’s nothing that would suggest Brown won’t be reinstated after serving the allotted eight games.

Brown would also need to pass COVID-19 testing upon signing with a new team. Any new free-agent signing has to go through a six-day COVID-19 entry testing process before he can join his new team, according to NFL Network’s Tom Pelissero.

Antonio Brown rumors: Which NFL team could sign him?

The only team named specifically in Schefter’s initial report, the Seahawks are likely in the running because of Wilson and Smith. We’ve also seen Seattle sign an embattled receiver before, when they brought in Josh Gordon after multiple suspensions.

The Seahawks don’t necessarily need Brown badly, as Tyler Lockett and DK Metcalf form one of the top receiver combinations in the league. But if Brown is the player he once was, he’d make Seattle Super Bowl favorites if the defense can firm up.

Bill Belichick took Brown on as a reclamation project in 2019, but that didn’t last very long. It’s likely that New England wouldn’t go that route again, but the Patriots do consistently reach into the NFL’s free-agent pool for talented players who are viewed as troubled for one reason or another. If Cam Newton has interest in joining with Brown, the Pats’ receiving corps could certainly use the help.

Jackson has said in the past that he’d be “happy” if the Ravens signed Antonio Brown. Jackson threw with Brown in the offseason. Antonio Brown is also cousins with star Ravens WR Marquise Brown, who made the introduction between Jackson and Antonio. Baltimore has a run-heavy offense, but Antonio Brown would instantly become their top passing game weapon.

Brady welcomed Brown into his home last season when Brown joined the Patriots, although that marriage ended in a relatively quick release as more about Brown’s past misconduct emerged. It’s not obvious how Brady feels about Brown at this point.

The Buccaneers already have Mike Evans and Chris Godwin, but because they’re both injury-prone and Bruce Arians loves to pass, there’d likely be room for Brown if Tampa Bay wanted to sign him.

The Eagles are down Alshon Jeffery, Jalen Reagor, Zach Ertz and Dallas Goedert in their passing game. Travis Fulgham has emerged, and DeSean Jackson is back, but if Doug Pederson wants to make a charge in the NFC East, maybe Brown is the answer to help Carson Wentz.