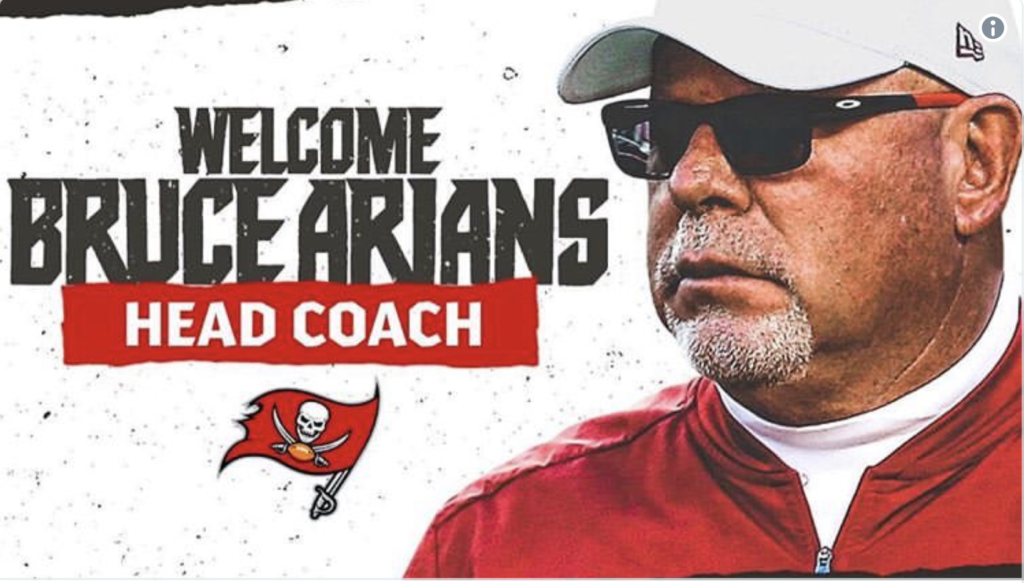 Bruce Arians is ending his retirement to become the next head coach of the Tampa Bay Buccaneers, the team announced Tuesday night.

The deal is for four years with a one-year option.

Arians, who retired following the 2017 season, his fifth as Arizona Cardinals head coach, spent the 2018 NFL season working as a game analyst for CBS.

“Bruce Arians is one of the NFL’s most well-respected coaches over the past two decades, and we are excited to have him leading our team,” Buccaneers owner Bryan Glazer said in a statement. “Throughout this process, we focused on finding the right coach with a proven ability to elevate our players and lead our team forward. Bruce has played a large role in the development and career success of some of our league’s best players, and we look forward to seeing him continue that work here with our franchise.”

Arians, 66, expressed his excitement about joining the franchise in a tweet following the announcement.

He was technically under contract with the Cardinals through the 2019 season. The league office’s original guidance to the Buccaneers was that no compensation was needed, but the Cardinals made a late argument to the league office that they should continue to hold Arians’ rights.

Rather than be drawn into a protracted dispute, the parties agreed to swap sixth- and seventh-round picks to resolve the matter, clearing the way for the Bucs to hire Arians. Tampa Bay receives Arians’ rights and Arizona’s 2019 seventh-round pick in return for the Buccaneers’ 2019 sixth-round pick, a source told ESPN’s Adam Schefter.

Former Jets head coach Todd Bowles, who was fired last month after three straight losing seasons in New York, will join Arians in Tampa as defensive coordinator, sources told ESPN’s Dianna Russini. Bowles played for Arians at Temple in the mid-1980s, and the two have remained extremely close. Bowles served as Arians’ defensive coordinator for the Cardinals from 2013 to 2014, a job that was a springboard to the Jets’ head-coaching position.

Bucs defensive line coach Brentson Buckner, who also was on Arians’ staff in Arizona, joined the Bucs last offseason. Buckner is under contract through 2019.

The current plan is for Byron Leftwich to join the Bucs as offensive coordinator and for Harold Goodwin to sign on as assistant head coach/run-game coordinator, sources told ESPN’s Josina Anderson.

In Tampa, Arians will reunite with Buccaneers general manager Jason Licht, who served as the Cardinals’ vice president of player personnel in 2013, and quarterback Jameis Winston, who attended Arians’ football camps in Birmingham, Alabama.

“Jaboo was a Birmingham legend,” then-Cardinals coach Arians said prior to facing Winston and the Bucs in 2016. “He would be fun to coach, there’s no doubt about it. He’s a winner and a great leader and obviously a heckuva young quarterback.”

Arians played a role in shaping Licht’s philosophies as a GM. When Licht traded up to select kicker Roberto Aguayo in the second round of the 2016 draft — a move that drew league wide criticism — Licht quoted Arians’ famous “no risk it, no biscuit” line after the draft decision. Aguayo struggled and was cut the following season.

The Bucs are counting on Arians to orchestrate a quick turnaround, much like he did in Arizona. The Bucs haven’t reached the playoffs since 2007 — the NFL’s second-longest postseason drought — and have finished with double-digit losses in seven of the past 10 seasons. Tampa Bay fired head coach Dirk Koetter on Dec. 30 following consecutive 5-11 seasons.

Arians served as the Cardinals’ head coach from 2013 through 2017, amassing a 50-32-1 record (playoffs included), the best in Cardinals franchise history, despite inheriting a team that went 5-11 under predecessor Ken Whisenhunt the season before Arians arrived.

Arians was twice named the AP NFL Coach of the Year (2012, 2014), becoming the 11th coach to earn the award two times and the first interim coach to win the award. In 2012, he stepped in for Chuck Pagano and guided the Indianapolis Colts to an 11-5 record (Arians went 9-3) and a playoff berth.

In his first season with Arizona in 2013, Arians led the Cardinals to a 10-6 record, which was then just the second time in the franchise’s 37 years that it had won 10 or more games. Arians’ Cardinals teams had double-digit wins in three of five seasons, and he is 1-2 in the postseason.