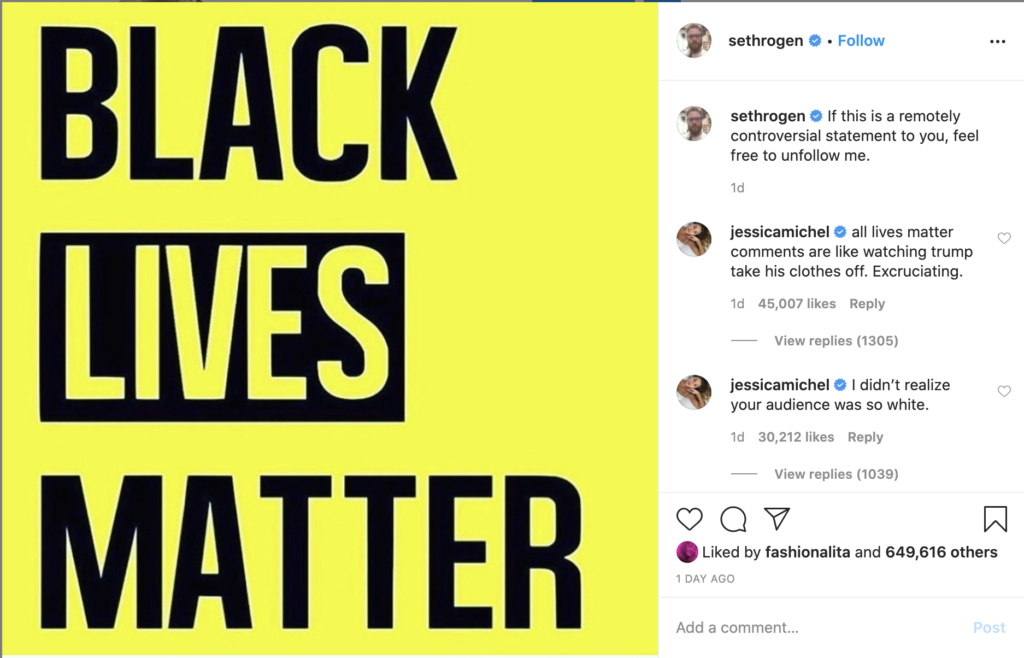 Seth Rogen is Not Going For Your Bullshit

Actor Seth Rogen responded on Monday to Instagram users who commented phrases such as “All Lives Matter” on a post he uploaded indicating his support for the Black Lives Matter movement following the recent death of George Floyd.

In an Instagram post on Monday, Rogen shared an image bearing the words, “Black Lives Matter,” in bolded black letters on a yellow background.

The post, which has garnered more than 443,000 likes in the past day, went up as parts of the nation entered a second week of demonstrations protesting over Floyd, who died while in Minneapolis police custody on May 25.

Rogen wrote that “if this is a remotely controversial statement for you, feel free to unfollow me.”

In response to a number of comments from his followers posting phrases like “All Lives Matter,” Rogen fired back with an array of colorfully worded replies that have since gone viral on Twitter.

“All lives matter. Because all life is precious. No life is more important than another,” one commenter wrote.

“Shut the f— up,” Rogen wrote in response.

“#Alllivesmatter. People making this only about blacks. When its about all races of color. Why do all these brutality videos only show the end? They don’t show wtf these people where (sic) doing to get in trouble in the first place,” another comment read.

“All life’s matter,” a commenter said.

Floyd died at the age of 46 last week after a white Minneapolis police officer, Derek Chauvin, knelt on his neck for several minutes during an arrest.

In footage of the moment, Floyd could be heard telling the officer that he couldn’t breathe. Chauvin has since been fired from his post at the Minneapolis Police Department and was later arrested and charged with third-degree murder and second-degree manslaughter.

The footage of Floyd’s arrest has sent shock waves throughout the United States and has reignited an ongoing conversation of race and police brutality.

“Star Wars” actor John Boyega also went viral on Twitter on Wednesday for condemning racism and telling any fans of his who are racist to “f— off” following Floyd’s death.