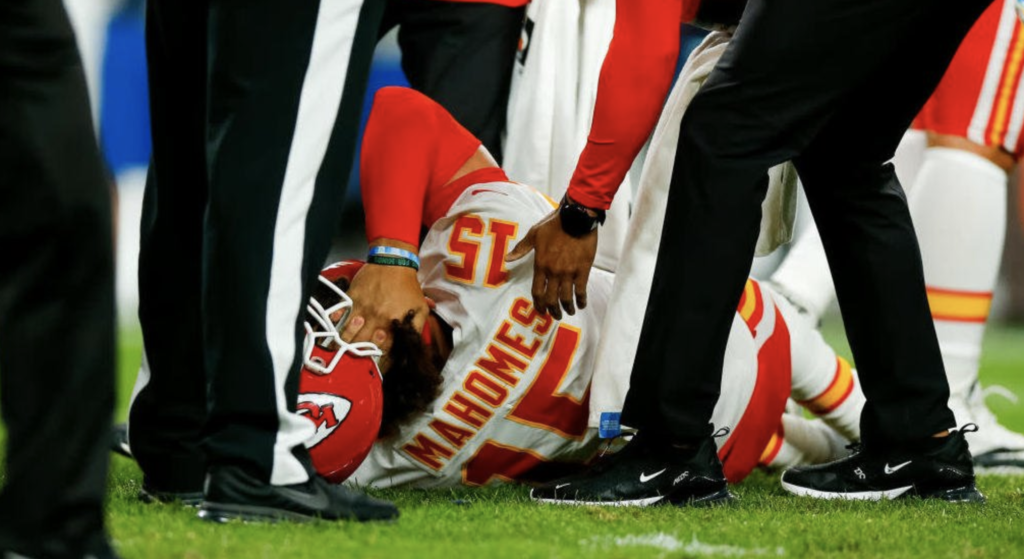 That Sound You Hear Is Chiefs Nation Crying

Mahomes will undergo an MRI to determine whether there is any ligament damage, a source told ESPN’s Adam Schefter.

The NFL’s reigning MVP was injured during a quarterback sneak on fourth down with just over nine minutes remaining in the first half. As medical staff attended to him on the field, it appeared Mahomes’ knee was straightened and popped back into place.

A cart came onto the field, apparently to take Mahomes for treatment. He was instead helped off the field by a couple of trainers. Players from both teams came by to offer encouragement.

Mahomes, 24, soon left for the locker room, walking under his own power but with a limp. He was in the X-ray room for only two minutes before the Chiefs ruled him out, according to the Fox broadcast.

The team did not immediately offer details on the nature of the injury. According to the broadcast, Chiefs coach Andy Reid said Mahomes told him he was going to be OK on his way off the field.

After the game, Reid said the team would wait to get back to Kansas City before offering further evaluation.

“Not too many people get hurt on a sneak,” Reid said after the game. “It’s a freak thing, and it happens.”

A source told Schefter the Chiefs “will not know more until the [MRI] images.” If there isn’t damage, the best-case timeline for Mahomes “would be around three weeks,” a source said.

Mahomes addressed his teammates in the locker room after the game, a 30-6 victory. “Take care of yourself this weekend. Enjoy yourself. Be smart. We got more to go, baby,” he said, smiling. He could be seen limping in the locker room, with his leg in a black sleeve or brace. He appeared in good spirits as he slapped hands with teammates.

Chiefs players understood the severity of Mahomes’ injury after his kneecap popped out of place in the second quarter and was quickly massaged back into place by members of the team’s medical staff.

“He was saying, ‘It’s out, it’s out,'” guard Laurent Duvernay-Tardif said. “Nobody really understood what he meant at that time, and then we saw it. … That’s when we started panicking. Not panicking, but seeing that he was not all right.”

Duvernay-Tardif, a medical school graduate, said he didn’t need any particular knowledge to immediately realize the seriousness of Mahomes’ injury.

“Everybody could have known something was wrong,” Duvernay-Tardif said.

Tight end Travis Kelce said, “His knee didn’t even look like a knee. It was all out of whack. I couldn’t even describe it.”

Mahomes entered Thursday’s game hobbled by a left ankle injury he tweaked during a Week 5 loss to the Indianapolis Colts when a teammate accidentally stepped on him. He played through the ankle injury in Sunday’s loss to the Houston Texans and intended to do so again Thursday.

Veteran Matt Moore, who joined the Chiefs (5-2) late in the preseason after backup Chad Henne broke his right ankle, replaced Mahomes. He threw a 57-yard touchdown pass to Tyreek Hill and completed 10 of 19 passes for 117 yards.

“[He said] ‘How about my guy?'” Moore said of Mahomes, who gave an off-camera shoutout to his replacement. “Guys cheered.”

Moore, 35, appeared in one other game this season, throwing an incomplete pass against the Jacksonville Jaguars. Prior to that, he hadn’t played in an NFL game since 2017 with the Miami Dolphins.

Entering the night, Kansas City’s Super Bowl odds were 8-1 and its AFC title odds were 7-2, according to Caesars Sportsbook. Caesars has since taken the odds down with Mahomes’ status up in the air.

The Chiefs will have nine days off until their next game, Oct. 27 against the visiting Green Bay Packers.