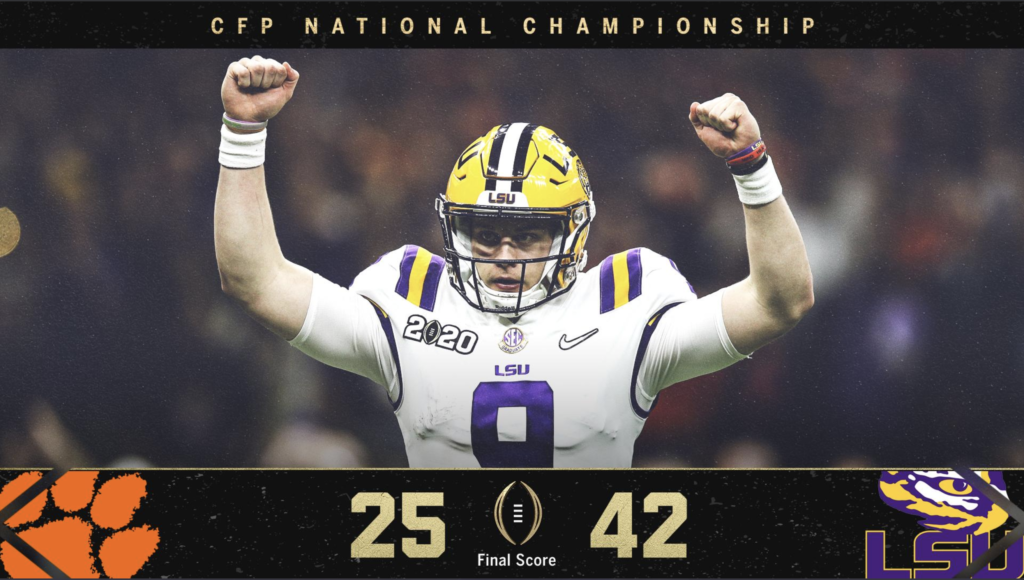 There Can Only Be One King

The team with the longest winning streak in the country couldn’t even stop Joe Burrow.

The LSU QB and 2019 Heisman winner accounted for six touchdowns as No. 1 LSU beat No. 3 Clemson 42-25 in Monday night’s national championship game to cap an undefeated season.

Burrow threw for 463 yards as he set the single-season FBS record for touchdown passes and narrowly missed the record for best completion percentage in a season with a 31-of-49 passing effort. Five of those completions went for TDs and he ran for another score.

The fifth and final passing TD was the dagger that sent Clemson to its first loss since Jan. 1, 2018. Burrow hit Terrace Marshall Jr. for a 24-yard score to put LSU (15-0) up three possessions with 12:08 to go.

Clemson (14-1) had a shot to pull within 10 with just over 10 minutes to go as Tee Higgins hauled in a deep pass from Trevor Lawrence for a TD. But like much of everything on Monday night, the play didn’t go Clemson’s way as Higgins was called for offensive pass interference.

The Tigers with the 29-game win streak ended up punting on that drive. And LSU’s win was all but official with 3:53 to go when Lawrence fumbled while running for a first down.

LSU’s offense wasn’t unstoppable all game. There were times — especially at the beginning of each half — where Clemson confused Burrow and the Tigers and got sacks or forced incompletions.

But just like each of the 14 previous opponents who encountered LSU and its no-look offense in 2019, Clemson couldn’t bring LSU to a halt.

That especially applied to WR Ja’Marr Chase. The sophomore won the Biletnikoff Award as the nation’s best receiver in 2019 and feasted on single coverage in Clemson’s secondary. LSU motioned a lot pre-play to get Chase isolated on defenders and Burrow did an exceptional job finding him for big plays. Chase finished the game with nine catches for 221 yards and two touchdowns.

Crazily enough, the 63 percent completion percentage Burrow posted on Monday night was his worst of the season. He didn’t complete fewer than 71 percent of his passes in any of his previous 14 starts this season.

Burrow also finishes the College Football Playoff with a staggering 14 touchdowns in two games after he threw for seven and ran for one against Oklahoma in the Peach Bowl. Those 14 are clearly a playoff record and a record that doesn’t seem like it’ll be touched anytime soon. He’s been insanely good this season. And he’s set to go No. 1 in the 2020 NFL draft.

Despite the win streak and its status as defending national champions, Clemson entered the game as an underdog. After both teams traded punts back and forth to start the game, Clemson struck first for a 7-0 lead when Lawrence scored from one yard out.

The early lead got to 17-7 after Higgins scored on a 36-yard reverse. At that point it looked like Clemson was going to be the team whose offense asserted itself.

Instead, Burrow and LSU got cooking while Lawrence and Clemson couldn’t extend drives. Clemson finished the game a staggering 1-of-11 on third downs. The Tigers were 10-of-15 on third downs in their annihilation of Alabama in the title game a year ago. And Clemson had never been worse than 6-of-14 on third downs in any of its three previous College Football Playoff National Championship Game appearances.

Despite the lack of success on third down, Clemson had a chance at the start of the second half. Clemson’s defense had some success blitzing Burrow and forced LSU to punt right after halftime. Clemson got a short field in response and scored in six plays to cut LSU’s lead to 28-25.

But that’s as close as the game ever got in the second half after safety Nolan Turner dropped a potential pick-six on LSU’s ensuing possession. While LSU was forced to punt after the play, Clemson had to punt too. And then Burrow found Thaddeus Moss for his 59th touchdown of the year to push the lead to two possessions.

Not only did Clemson lose for the first time in over two years, a team with Clemson QB Trevor Lawrence lost for the first time since Nov. 17, 2017. That was the final game of Lawrence’s career at Cartersville High School (Georgia).

Lawrence has been widely considered one of the best NFL quarterback prospects in college football ever since he set foot on Clemson’s campus. And he’s been fantastic for the Tigers with 66 passing touchdowns and just 12 interceptions. But Monday night was far from his best game.

Lawrence was just 18-of-37 passing for 234 yards. It’s the first time he’s ever completed fewer than 50 percent of his passes in a game at Clemson and just the second time he hasn’t thrown for a touchdown with the Tigers.